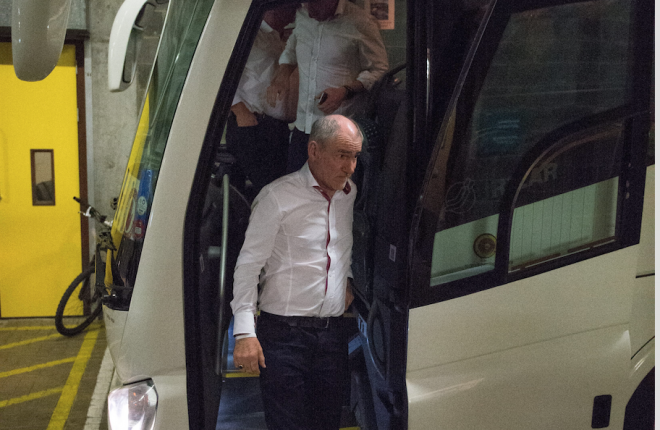 I lived in East Ham one summer, in a tenement building called Teasel Way. The lifts were always broken because the drug dealers didn’t want the cops to catch them by surprise. So, the young lookouts hanging around the ground floor entrance made a fuss and by the time the cops got to the ninth floor there was nothing to be seen.

I was labouring with a crew from Galway, excavating basements in Chelsea. We started at seven and because I was the last man in, I was in the basement with the kango, breaking up the ground then shoveling it onto a plywood platform at chest height, where an ex Irish army man shoveled it up onto a wheelbarrow at ground level.

So it went, hour after hour. It was the only time in my life I was really tired. Often I fell asleep in the tube on the way home, waking up at the end of the line, covered in dust and muck and too tired to care. The reason I was never mugged was I looked like a mugger.

I lived with a crowd of paddies. There were seven of us in a one bedroomed flat. We sat around in the summer’s evenings, drinking tins of Carlsberg Special Brew or Kestrel lager, then throwing the empties out our seventh floor window into the courtyard below. This was a spectator sport. We would listen to hear what happened the empty tin. Usually, it echoed off the tarmac. Sometimes, you’d hear a roar of anger. It was a wild place. We used to drink at the weekends in a bar called The Greyhound. One Saturday, a row broke out and a man was stabbed to death.

I was in the tube one Saturday when Millwall were coming to Upton Park to play the Hammers in the FA Cup. It meant nothing to me, so sitting there with my St Canice’s GFC gearbag was no big deal.
As we came to the stop before the ground, the wall of the carriage started rumbling. Millwall fans, beating the windows with their fists. The train stopped and they rumbled into the carriage. A young policeman wearing one of those tall helmets stepped in with them. “ You f***ing smell pork lads?” The Millwall fans crowded round him, sniffing his face and body. Just as the doors closed, he stepped out. Jesus, I thought, we’re dead.

The GAA bag was under my seat now and I had my legs covering it as best I could. “Awroight sunshine” said a big man in a leather jacket, leering into my face. I nodded. He grabbed the fluorescent light and pulled it down. It exploded, sending black dust everywhere. He looked at his hands, covered in black dust, then rubbed them on his face. “Look lads” he shouted, I’m a f****ing n****r.” His mates began slapping his face, chanting “Wog Wog Wog Wog.” At the next stop, out they rumbled, singing a catchy little number along the lines of “We are Millwall, super Millwall, no one likes us, We will kill you.” I breathed out and reflected that it was good to be alive.

The only way for Derry to beat Tyrone on Sunday week might be to hijack their bus on the way to the ground. Maybe invite some Millwall fans over in advance to give the Derry Supporters Club some pointers.
They are not the finished article. Without a Michael Murphy or a Bernard Brogan, they are minus the great forward that is virtually obligatory to win All-Ireland’s. A Matt Connor or a Brian McGuigan or a James O’Donoghue.

But that is not the only way. The Derry team I played on were the dominant side in Ireland for three or four years and we did not have a Peter Canavan. What we had was a superb collective up front. A chemistry. Jimmy McGuinness this week ruled out Tyrone on the basis that they do not have a great forward. But Tyrone’s collective approach makes it very difficult to deal with them.

Their entire team is comfortable in front of goal. When their corner back Aidan McCrory found himself on the 21-yard line against Derry in the recent League game, he gave a dummy, stepped inside and calmly passed the ball to the corner of the net. On 20 occasions in that game, Tyrone men were streaming through in numbers, heads up, hunting for scores.

For four years they have suffered from a safety first approach. So, they have been content to tap the ball over the bar. This does not win All-Ireland’s. They have mastered the art of preventing goals and are probably the best in the country at this.

This year, they have been working on scoring goals. At the higher level, if there is a remote possibility of a goal, then it must be taken. I met one of the Tyrone players during the week. Or rather, I was stopped at traffic lights and saw him walking past so gave him the bird.

He laughed and came over. I rolled the window down. “Hope you boys are getting ready for Dublin” I said. He smiled and said “We are indeed Joe. Stop goals. Score goals.” The lights changed and I drove on, reflecting that we will just have to grin and bear it next weekend when the Celtic Park stand is filled with the Tyrone mob chanting “There’s no London in Tyrone.”
comment@gaeliclife.com