I WAS up at Derrylaughan last week to launch a event for the Kevin Barry’s. A night in Falls’ Bar reminds you why the Brits eventually gave up 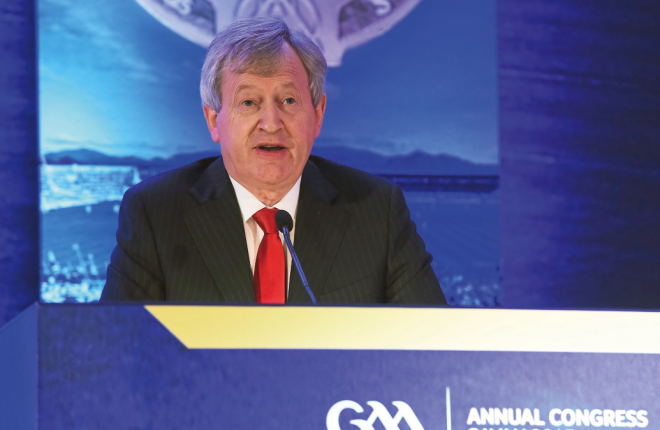 I WAS up at Derrylaughan last week to launch a fund-raising event for the Kevin Barry’s. A night in Falls’ Bar reminds you why the Brits eventually gave up.

The seniors are in Division Two in Tyrone and the whole squad turned out for the event, looking in fantastic shape. As they sipped spring water I took a long, happy swig from my pint of stout. “Are you training much?” Turns out they are training three times a week, as well as trips to the High Performance Lab and regular challenge games.

“We have four county minors” the captain told me, “We won’t see them until May.” The other big gripe was the one you hear in every county in Ireland. Fixtures. “We get messed about something shocking Joe. It is very disheartening. One phone call from Mickey Harte is enough to get forty club games put off.” Philip Jordan wrote starkly about this problem recently. He could have been talking about any county.

The big fallacy at the heart of the GAA’s thinking over the last twenty years is that we are competing with soccer and rugby. This has had a number of damaging knock-on effects. As commercial opportunities have been pursued without recourse to principle, GAA members have increasingly come to be treated as mere consumers.

The county game has become a commercial colossus that dominates the calendar, leaving the clubs to feed on the scraps. County football has been professionalised by a cartel of managers, aided and abetted by the county boards. All of this has left the grass roots feeling alienated.

The minor county game is now a demolition derby, coming right in the middle of what is the most important year in many young people’s lives. Club players are neither here nor there and our young men – during their formative year – are training more than the All-Blacks.

Martin Loughran, elite physio at the Sports Institute at SINI, was the physio with Tyrone minors and injury prevention expert with elite footballers in Tyrone between the ages of 14-21. He describes how he, in common with his colleagues, has been banging his head off a brick wall for the last ten years trying to get the GAA to abolish the minor grade. He paints a frightening picture.

As physio for the Tyrone minors, it was common for him to have 16-18 players on the treatment table on any given night. That is 16-18 out of a panel of 33. Two years ago, he resigned from his wider underage role along with the county’s high performance coach Liam Donnelly, on the basis that player welfare was a subject to which lip service is paid.

Minor players during the 2013 season in Tyrone played 30 games in 90 days (between club, county and college), on top of 40-45 training sessions. In fairness to Tyrone, they are making serious efforts to confront this problem. But the minor grade has become an arms race and to compete, they are training like seniors. This is the pattern in every county. Through his work at the Elite Sports Institute, Loughran treats players from many counties and constantly gathers information. Noel Napier, consultant radiologist at the Ulster Independent Hospital and at Alliance Medical, spends his days reading MRI scans on players and reporting on them. Serious overuse injuries to the hip, groin, knee, hamstring and ankle are piling up.

This idea that we are competing with pro sport is a damaging fantasy. The hierarchy – until now – has been looking at it in the wrong way. My good friend Des Fahy is the author of “How the GAA survived the troubles.” It is a poignant, well written book, but I disagree entirely with its central premise.

There was never any question of the GAA not surviving the troubles. If the British had blown up every GAA club in the six counties it wouldn’t have mattered a damn. We would simply have rebuilt them, and better. Because the GAA is a part of what we are. Pat Gilroy said in an interview once that when it came to his kids, he had a very democratic approach to sports. “They can play any sport they like so long as its football and hurling for Saint Vincents.” My own kids tried various sports but having been immersed in GAA club life since childhood, found themselves as fish out of water. It is what we are.

So, for example, the idea that SKY would somehow help to promote GAA in foreign lands was always doomed, since the GAA is a self help, community based organisation.

On Friday night, I was in the packed Dungiven clubhouse for an absorbing lecture on The Easter Rising. The critical role of the GAA in breaking the mental stranglehold of the British was one of the central themes. We were little englanders by the late 1800s. At the national schools we sang “God save the King”. It was compulsory to start each school day with the following prayer “I thank the goodness and the grace that on my birth has smiled / And made me in these christian days, a happy English child.”

The GAA, founded in 1884, was a profound catalyst in the revival of Ireland. The example of Kilkenny is instructive. By 1890, the most popular sport in the county was ….cricket. It was played extensively in rural areas by farmers and farm labourers and had widespread appeal. There were 50 cricket clubs in the county (that is not a misprint) compared to four hurling clubs.

A tourist might easily have mistaken it for Lancashire. The historian Mark Duncan notes that when Michael Cusack visited Kilkenny to see for himself what the state of play was, he was enraged. He eventually found a hurling game which was “very poorly attended” being played by two teams “whose hurling was the worst and most spiritless ever witnessed on an Irish hillside.” At one point, “as the game continued around them, a half dozen players lay down on the ground for a rest, which would be enough to break the hearts of the more serious hurling folk of Tipperary and Galway.” This was obviously pre-Cody.

What happened next tells us all we need to know. The GAA leaders put in place an administrative structure and set about organising club championships. It quickly became a source of pride to Irish folk and spread like wildfire. In Kilkenny, they set down the cricket bats and took up the hurls. As Duncan puts it, an identity centred around hurling prowess began to take shape. Cricket disappeared. Clubs quickly became the focal point of communities. We were no longer aping the english. We had something of our own. Something that made us feel great.

It didn’t take Derry to win an all Ireland to promote the GAA in Derry. It was flourishing for 100 years before that. The county remains a cultural and Irish sporting hub. We brought two underage teams to Lavey last week, one of the smallest parishes in the county. They have architect designed state of the art changing rooms and clubhouse. There is a indoor GAA pitch, two full size floodlit grass pitches and a large gym room. There was tea and sandwiches afterwards for everyone.

When we were leaving, the u-8s were training indoors and the ladies footballers were taking the field. Competing with rugby my arse. It is the same throughout the country. We brought underage teams to Kilmacud last year. At u-14 level, Kilmacud had 120 kids. In the city, the GAA is flourishing like never before. Why? Self help.

Until now, the GAA has looked at things in the wrong way. Real promotion of the GAA entails supporting the clubs. The reason lads play soccer – especially in the cities – is not because they don’t like The Sunday Game, which would be a heresy in itself. It is because they get regular games.

As Liam Farrell from Rostrevor, Co Down tweeted recently when club fixtures were postponed at the county manager’s request, “Down club football suffers yet again, no wonder players starting to prefer soccer.” Gaelic club footballers train very hard, often four times a week, often with no game in sight.

There are big fixture gaps during the season and the training/match ratio is around 12-14 to 1. If however they choose to play soccer, they get a game every Saturday, come hail or shine and train around once a week. It’s a guaranteed 25 game season, run off weekly, allowing players to plan their lives. As the young population moves east, to Belfast and Dublin, lads simply want to play regular games. If we cannot offer them that, they might play soccer, which can. That is where the competition lies.

On the face of it, Paraic Duffy’s fixtures motion couldn’t be any less radical. It merely condenses the league by a few weeks, removes replays save for provincial and All-Ireland finals and fixes the All-Ireland finals a fortnight earlier. But it could be the beginning of something far more profound.

Perhaps the fog is beginning to clear from the minds of the hierarchy. Maybe the penny is finally beginning to drop with them that promoting our games means supporting the clubs, not just telling them now and again that they are “the lifeblood of the association.” Derrylaughan Kevin Barry’s are the lifeblood. Before Paraic Duffy addresses Congress on saturday, he should invite the Kevin Barry’s captain to address the delegates. In two minutes, he will tell them exactly what is wrong with the GAA.

We are not under threat from foreign sports. The threat lies within.

* This article appeared in the Gaelic Life on Thursday, February 25