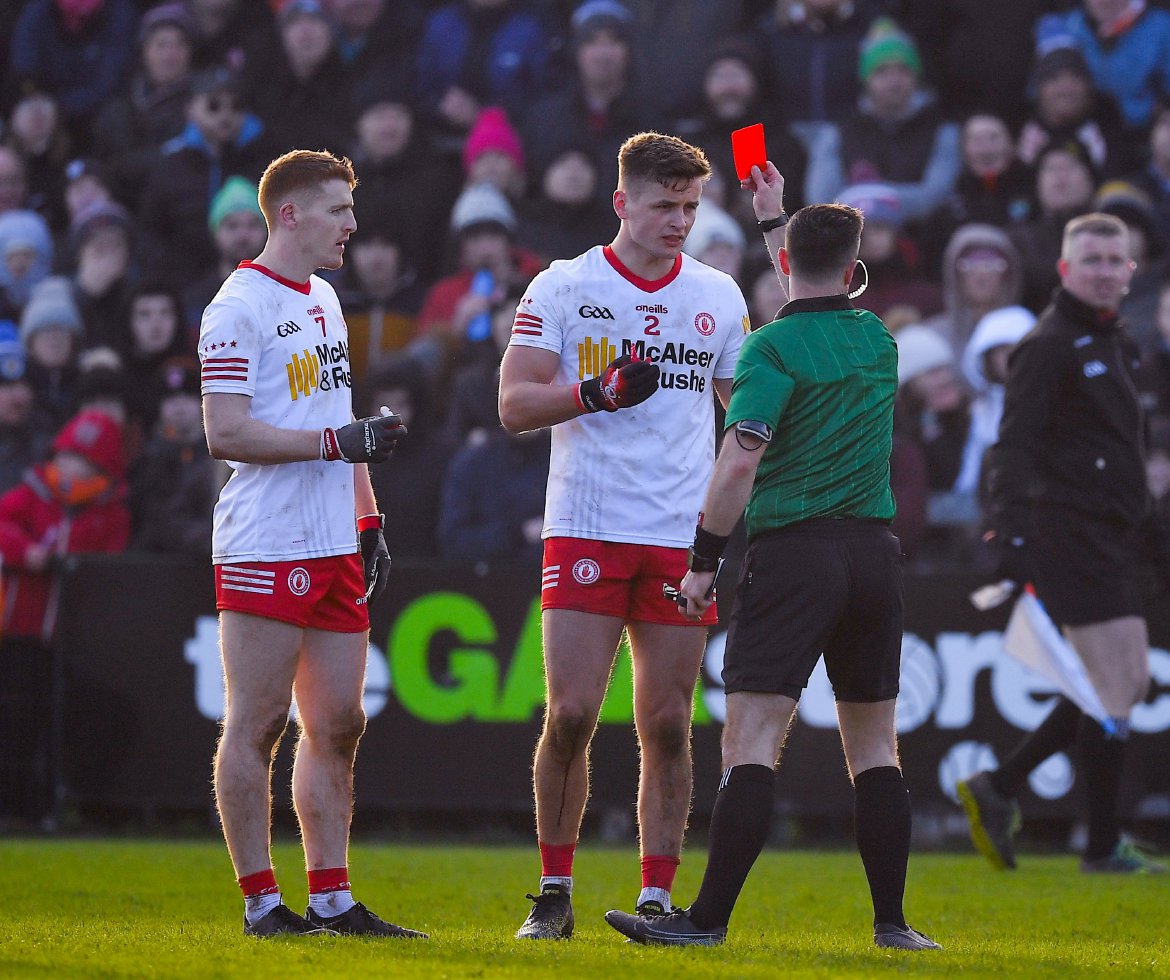 FAIR play to David Gough for sending off four Tyrone men. I am beginning to think I may have misjudged him. He could have sent off far more for the vague offence of contributing to a melee, but as things stand the referee’s job is an impossible one. David, our best referee, calmly and expertly dealt with the matter during the game but in the absence of a video referee, he was never going to get it right. Again, avoidable refereeing errors were a major theme of the weekend.

In the Tipperary-Laois hurling game, Paddy Purcell appeared to strike Craig Morgan off the ball. Referee Sean Cleere called over Ben Conroy, noted his name and sent him off. Conroy protested loudly and eventually, the referee – obviously moved by his entreaties – consulted with the linesman, who luckily for Conroy, had seen the incident and knew he was innocent. The referee went back to the centre, beckoned in Purcell and sent him off instead. Again, a video ref would have been able to deal with it in a few seconds.

Ronnie Fay was buried in her beloved Skerries the Thursday before the Dublin game with Kerry. Having spent her entire adult life fighting for the rights of the travelling community, a huge crowd of Dublin travellers was there to see her home. She loved them. They loved her. Red Mickey was the first to spot me. “Joe Brolly,” he shouted, “Get over here, till we talk to you.” After he gave me a run down on the ills of Dublin, I said “I’m going to put you in the paper this week Mickey.” “No point” he said. “Why not?” “I can’t read.” Which brought a great roar of laughter from the crowd that had gathered round.

“That aul Sunday Game has gone awful boring,” said Paddy McDonnell, a big man wearing a very fashionable sun hat. “Do you not like Colm O’Rourke?” I said. “Another gobshite” he said. “Put it this way Joe, if Red Mickey was on The Sunday Game with him on the Sunday night, you’d be representing him in the District Court on Monday morning.” “You’re not a fan of Dessie Farrell either,” I said. “I’ll tell you something Joe,” said Red Mickey, “my mother Bridget could have managed them to the six in-a-row.”

Tralee stadium was packed, and the players were rutting at each other long before the throw-in. Conor Lane was about to take action, looked around, saw they were all at it, and threw in the ball. Kerry had a gale at their backs and played good attractive football, with long kick passing and good forward spacing, reminiscent of their play in the first half of that immortal 2013 semi-final. Clifford missed a penalty in the 19th minute, putting it a full metre wide, before making up for it with a delightful point after a hilarious dummy. 20 minutes: Kerry 0-6 Dublin 0-4.

Then came the decisive period. In the 23rd minute, Dean Rock scored an amazing, fluked goal, but as he did so, away from the play the Dublin no.4 had blocked the Kerry defender. The umpires called in the ref, confidently identified Scully (no.12) as the wrongdoer, the goal was disallowed, and a mystified Scully was black carded. In fairness, Scully took it like a man.

A video ref would have immediately seen on his monitor that at the time of the offence, Scully was walking close to the sideline 35 metres away and that it was clearly the Dublin no.4 who had committed the offence. As it was, a serious error was made.

Kerry immediately tagged on two quick points, then Dublin, looking like a new team at the Ireland’s Got Talent auditions, botched a brilliant goal chance. A long kick-out sent Lorcan O’Dell clean through with Dean Rock hovering at the far post to palm it to the net.

The young man flunked his audition, hand-passing the ball so far over Rock’s head it went into the car park. After that it became embarrassing, Kerry feasting on the Dubs from there to half time, with Dara Moynihan scoring an excellent goal (under no pressure) to leave it 1-14 to 0-4 at the break.

The second week in-a-row an inside forward has scored an excellent goal against them under no real pressure.

The game was dead after that, with Dublin a shapeless mess, kicking in hopeful long balls, playing as individuals and worst of all, playing without discipline. It was a world away from Jim Gavin’s perfectionist regime. The worst was that Dublin showed no fight.

They ran about hand-passing and dropping balls and aimlessly solo running but none of this amounted to much.

Just as they had last week against Armagh, they looked like shmucks. A five-point defeat at home last week. Seven points this week. The greatest team in the game’s history have suddenly become the whipping boys of Division One.

I have argued before that we need to have a video ref for big games. My proposal is that we limit this to three things: 1. A penalty. 2. A disputed goal. 3. A sending off (either a black or red card).

The referee would have complete discretion whether to review. The TV official could draw the matter to his attention and invite him to view the incident again. Limiting it to these three matters would ensure that the flow of the game was not disrupted.

A sending off, a penalty, or a disputed goal (say the Meath thrown goal v Louth in the Leinster final some years ago) always takes time anyway. This would mean the referee would get it right, the crowd would not be incensed and the teams involved would not have a sense of grievance. And of course, if David Gough had been able to watch the monitor on Sunday, he could have sent off far more Tyrone men.