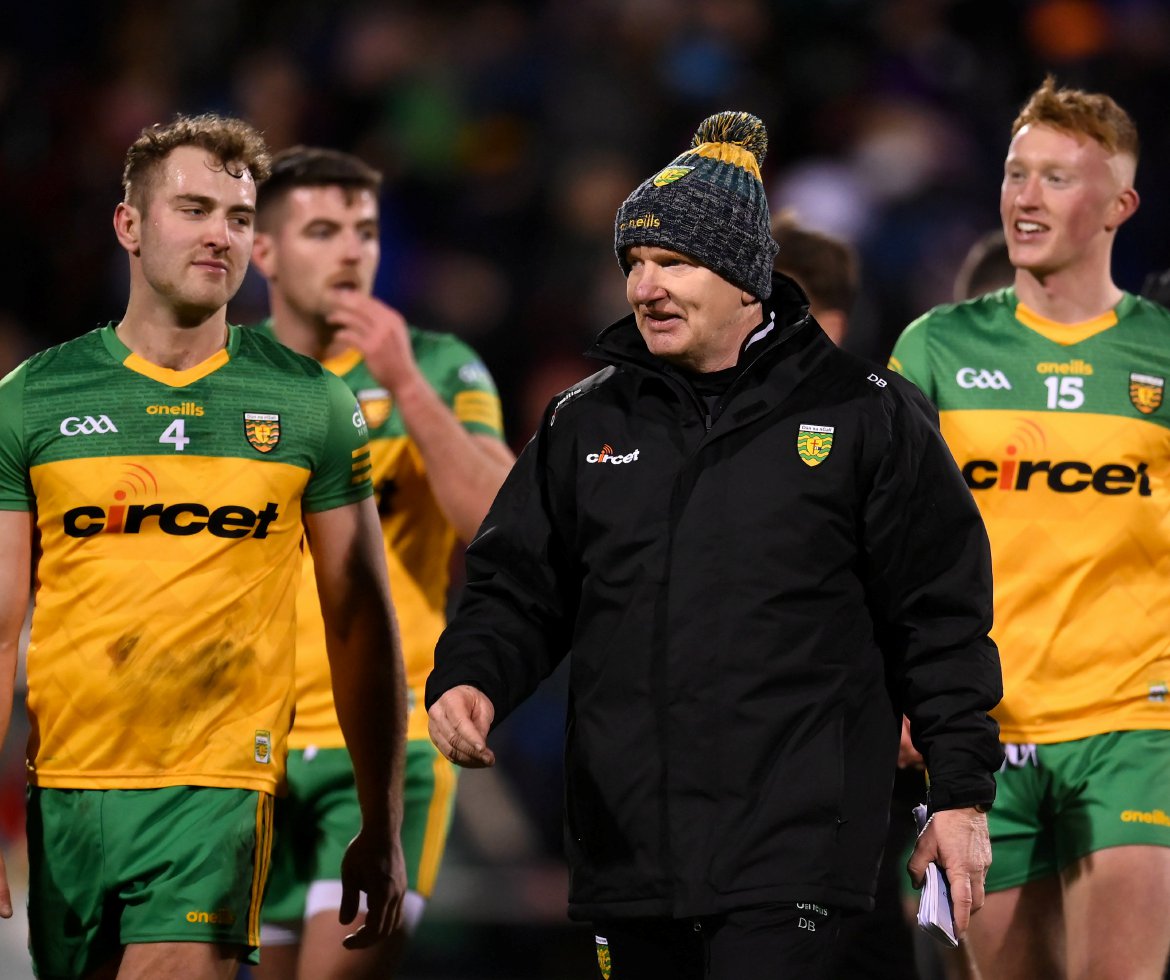 HOME ADVANTAGE...Joe Brolly reckons Donegal should play all their game at Ballybofey

DESSIE Farrell said last week that Dublin are on a good trajectory. Which was as plausible as the Russian ambassador saying they are mounting a humanitarian operation in Ukraine.

Maybe Dessie meant a good downward trajectory. If that is so, then against Kildare on Sunday their trajectory got even better. It’s not that the Dubs are being narrowly beaten. They are not even competitive. In their first four league games, they have lost by seven points, five points, five points and three points and never looked remotely like winning any of them. Dessie is not working. Nothing is working.

If Dublin’s trajectory is bad, Donegal’s before the weekend was worse.

There are only three things in Donegal: Rain, Daniel O’Donnell and Michael Murphy. When the Donegal team against Tyrone was announced over the tannoy and Murphy wasn’t in it there was a groan from the crowd.

In the Ulster semi-final against Tyrone last year, Donegal were in control until Murphy was sent off. Then, they collapsed.

Last week against Kerry, without him, they were pitiful, and ended up being walloped by nine points. Lucky David Clifford only came on in the second half.

On Sunday against Monaghan he scored enough to win a match for Dublin on his own, even if Rory Beggan’s performance resembled a highlight reel from ‘Footballers Do The Funniest Things.’

Donegal started the game woefully, hand-passing, soloing aimlessly and playing with 13 men back even though they had a gale at their backs.

When Donegal play like this, they are even more annoying than Mrs Brown’s Boys.

Tyrone, meanwhile, looked like All-Ireland champions, playing with precision and adventure, all long kick-passing and excellent movement up front.

It was no surprise to learn that Peter Canavan has been quietly working with the forwards. In the second minute, Darragh Canavan, the Son of God, weaved his way through the defence, confusing the defenders with his looks left and right and leftright toe-taps before releasing Conn Kilpatrick with a perfectly weighted hand-pass.

Conn, who scored a goal last week, flunked it, dribbling the ball wide. God the Father would have put it in the net himself and will not be happy with his son today.

Darragh is too modest, too unselfish. A better way of putting it is that he has not learned how to impose himself. At this point in time, he has the skills of his father but does not have his leadership qualities. Like the basketballers who make the step from goodness to greatness, he has to start taking responsibility at the key moments and become a clutch player.

As it was, the miss didn’t seem to matter much as Tyrone strolled to a 0-7 to 0-3 lead against the breeze, Donegal’s hopelessness exemplified by Hugh McFadden lumping a high ball in on top of Ryan McHugh in the square in the 28th minute when he was being double marked by Conor Meyler and Padraig Hampsey, then two minutes later Niall O’Donnell kicking a 40-metre free a full 20 metres wide.

In a rational world, Tyrone would go on to win the game by seven or eight. But Ballybofey, a bit like the magic road in Father Ted where everything goes backwards and nothing makes sense, is a Bermuda Triangle for opposing teams.

The last time Donegal were beaten there was 2010.

Tyrone missed two excellent goal chances in the first period. Then, out of the blue, Donegal hand-passed their way through and Paddy McBrearty passed the ball (a collectors’ item) to Conor O’Donnell who palmed it to the net. A moment later, Jason McGee kicked a massive long-range point and Tyrone looked bewildered going off at half time level.

Still, it looked for all the world like a temporary reprieve, and when Tyrone started the second half with a McCurry point after another terrific long-kick pass to him, we waited for the deluge. But deluge came there none.

Instead, Tyrone were suddenly woeful. Cathal McShane came on and did nothing. Michael McKernan (who was brilliant in the first half) shot for goal when he had a man waiting at the far post for the easy palm in. Johnny Munroe was put clean through one v one against the ‘keeper in the 61st minute and blazed it over the bar. Like his father Raymond, Johnny is not cut out for the fancy stuff.

Darren McCurry kicked a sideline free badly wide. Tyrone took a series of potshots from terrible positions. Meanwhile, with Shaun Patton quarterbacking them with an absolutely magical second-half kicking performance, delivering the ball with drone like precision, Donegal were enjoying themselves.

Of course, it was the usual hundreds of hand-passes and soloing and hard running, but now they were doing it with conviction.

Sensing that Tyrone were gone, Oisin Gallen kicked a great point to put Donegal one up in the 65th minute. Then, Darren McCurry kicked a bad wide, followed by a tame shot into the keeper’s hands from 25 yards. Donegal promptly swept upfield and Jack McKelvey dived to palm Oisin Gallen’s perfect hand-pass to the net.

When one team chokes, the other breathes. If only Donegal could play all their games in Ballybofey.