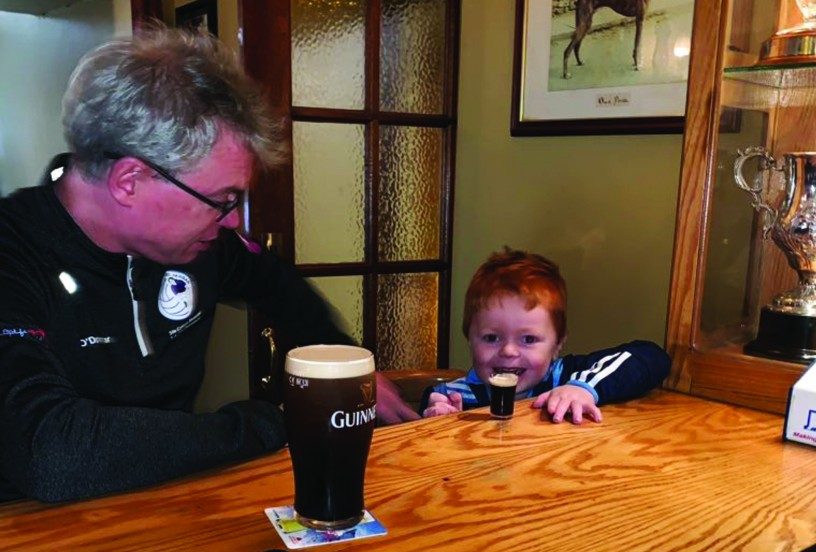 LIKE me, Seamus McCrory was a boarder in St Patrick’s College, Armagh. I went there long after him, and reading his book “Born to Lead” brings me back to that riotous and unconventional place, where the senior boys dispensed physical discipline alongside the teachers.

Once, I burst out laughing in the old study hall during the nightly 8pm to 9.30pm study period.

“Are you going to do something about him or will I have to?” roared Jeff Randal, a senior teacher in the school, who was reputed to have flown spitfires in the Battle of Britain.

One of the seniors came over and clattered me hard on the ear.

A few days after I had arrived at the college, in what they said was “a warning”, a group of seniors held one of the other senior boys down by the arms and legs in the first-year dormitory, and threw darts into his leg as he screamed in agony.

Some weeks later, we discovered the boy had a wooden leg. Later, when he became the prefect in our dormitory, he took off the leg at night and set it up-right beside his bed. Another time, a food fight broke out in the old refectory and the assistant Dean of Discipline had to flee as knives, forks and plates crashed around him.

Once he was gone, the seniors put a brush through the door handles of the ref and we waited. Then, the voice of doom. Father Kelly, the Dean of Discipline, said “You know who this is boys? Open the door or there will be trouble. I’m coming in.”

As he pushed and pulled the doors, the bombardment resumed. It was one of the first things we learned: safety in numbers.

Seamus paints a vivid picture of life in Armagh. Later, as a young teacher starting out in West Belfast, he gives a compelling eye-witness account of how West Belfast exploded in 1969, and how people fled their burning homes and sought sanctuary in St Aidan’s, where he taught.

His description of these Belfast refugees living and sleeping in the school assembly hall will be extraordinary and poignant for readers of all ages.

Once, he found himself in the middle of a full-scale gun battle as he walked home from school. As the bullets ricocheted around him, he found himself muttering the Act of Contrition. It is our good fortune that he survived, and subsequently moved to Longford, as he would otherwise never have lived to write the chapter “Journey of a Derry football fan”, a chronicle of elation and latterly, despair.

His book is a delightful miscellany from a life well lived. Our president John Horan is launching it in the County Library in Longford on October 16, with further launches in Belfast on October 24 and later in the year in Slaughtneil GAC, where my old friend Gerry Donnelly will do the honours.

Like so many of us, Seamus’s life is immersed in the GAA. On Saturday past, I spent the day in Cooraclare, West Clare, celebrating a precious life lost, and celebrating our precious community. Síle Callinan lost her battle against cystic fibrosis almost three years ago aged only 26, and this year, the third annual ladies 7s tournament in her honour was played, involving 12 ladies teams from all over the county.

The night before the action, I went into Tubridy’s bar in Doonbeg (the great Clare footballer David Tubridy was serving behind the bar) and my past life flashed before my eyes.

There, sitting at the bar, was Kieran O’Mahoney, a man built from granite.

I should know. A quarter of a century ago, during an epic two game series between ourselves and Munster, he hit me so hard my relations in New York felt it.

There are some boys whose hair you shouldn’t scuffle after scoring a goal. I used to think that the stars you saw in the cartoons when Jerry pushed a grandfather clock onto Tom’s head were in the artist’s imagination.

I can tell you that is not the case. That day in Omagh, I saw stars for a good 10 seconds. When I walked into the bar, a cheer went up.

O’Mahoney modestly described how it was “a good 50/50 fight with no other man getting involved.” God bless him for a liar.

Beforehand, I drank a pint with Colm Cooper in O’Doherty’s bar in Cooraclare.

Then, until it got dark we were on the Cooraclare pitch watching some terrific football and basking in the glow of what was happening.

Mickey Talty from Quilty (pictured) is the grandfather of Michael Talty, Síle’s still grieving fiancée (they were due to get married) and the main organiser of the event.

I will not forget the warmth of his welcome or his sense of humour.

It was not a part of Ireland I was familiar with and I will be back there soon to explore this wonderful county and its people.

The GAA world continues to turn.

The autumnal magical club mystery tour resumes this weekend with Crossmaglen v Maghery and Ballymacnab v Granemore in the Athletic Grounds, where friends will gather and cheer on their lads. We will drink tea at half-time and catch up.

For foreigners, the GAA community must seem something wonderful. For us, this is par for the course, but we must never take it for granted.

Communities must be created and zealously maintained. Otherwise, we will wake up some morning and be England.