TWELVE months ago, Jarlath Burns, chair of the Playing Rules Committee, said we were “witnessing the death of Gaelic football.” 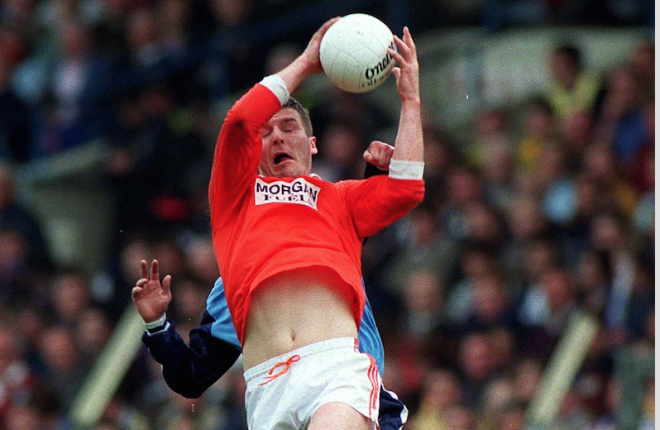 TWELVE months ago, Jarlath Burns, chair of the Playing Rules Committee, said we were “witnessing the death of Gaelic football.” The cause of death, according to the Playing Rules’ coroner? The blanket defence.
It was no more than a statement of the obvious, but at least we could be confident in the knowledge that the chairman of the relevant committee had identified the problem.

Recently, he has been saying that his remarks were taken out of context. Which reminds me of the classic Father Ted episode where Ted – to get himself out of a tight spot – says that Old Jim has died. As he’s speaking, Father Dougal looks out the window and shouts “ Ted, it’s Old Jim, he’s coming up the path. He’s alive Ted!” At which point Ted says “ Not that Jim. The other Jim.” Maybe Jarlath was talking about ladies Gaelic football or perhaps the word Gaelic was a misprint.

Normally in this situation the GAA does nothing. But at Congress, having spent the weekend crapping on the clubs from a great height, they decided that something would have to be done to breathe life into the corpse of Gaelic football. So, they brought in the Burnmark. No trial. Just rhetoric. As my good friend Pat Spillane is wont to say, they rearranged the deck chairs on the Titanic.

Influential committee member Darragh O’Se supported it but he is still suffering from Post traumatic Stress Disorder since the day in Croke Park when Tyrone had the temerity to tackle him, instead of genuflecting. I think Darragh knows it is a waste of time but he is cuter than the Healy Rae boys when it comes to politics.

He waxed lyrical on RTE Radio during the week about the glory of high catching, knowing full well high catching has nothing to do with it. Apart from anything else, you don’t have to high catch to win the mark. You can take it on your chest. Which happens with most kick-outs nowadays.

No. High catching isn’t the problem. It is alive and well. At Celtic Park at the weekend, the two teams put on an exhibition of the art. The Galway number 10 was awesome in this regard. As were James Kielt and Emmet Bradley. The problem, as everyone knows, is the blanket. Contrary to what Jarlath has been saying about it, the mark is irrelevant.

It is worth looking at the rule. If the player catches the ball from the kickout, he can call for the mark. If he does so, the referee will award him a free in the normal way. He then has five seconds to take that free. If he doesn’t manage to do it in that timeframe, the ball is thrown up. If on the other hand, he catches the ball and elects to play on, then he has no advantage.

The Dublin minors spent the last month trialing it. It was a disaster. They found that on around 50% of occasions, the player calling for the mark couldn’t get the kick away in time so the ball was thrown up. They found that when the mark was taken it allowed the blanket defence more time to ready itself. They found it disrupted the flow of the game.

There is nothing to be said for it. Firstly, on 100% of occasions when the short kick out is available, the keeper will take it short. So, when a team is playing Tyrone, or Monaghan, or Donegal, they will kick short. Last Sunday in Celtic Park, with both teams playing a full time sweeper, the vast majority of kick-outs went short. Against Mayo in the All-Ireland semi-final and replay last year, Cluxton went short with over 90% of his kickouts. Why take a chance?

Secondly, it slows the game down. The midfielder catches the ball and calls for the mark. The referee awards him a free kick. By the time he’s settled and ready to take it, the blanket is in place. Where’s the advantage?

Thirdly, it is ugly and disrupts the flow of the game. Catch, stop, free. It negates that classic catch and sprint which is the essence of great high fielding.

Fundamentally, it makes no difference. The problem at the moment is if you take a high catch cleanly, you can be fouled to slow the game down. You can still be fouled before you take the mark. And if you do take it, your only reward is a free kick. The result whether you are fouled or not is the same: a free kick. Did no one think this through?

The real problem is that winning midfield is no longer an advantage because of the blanket. Look no further than last weekend for the proof. In the Donegal v Mayo game there were 37 kickouts. Of these, Mayo won a colossal 27. Donegal won only 10. So, Mayo won 70% of the kickouts (including 10 of Donegal’s 15) and Donegal won.

Dublin minor manager Ciaran Whelan told me on Tuesday night that in the end, having carefully considered all angles, they instructed their players not to take the mark. Basically, to forget it existed. Which is what everyone else will do, except Jarlath and Darragh in their dreams.
comment@gaeliclife.com