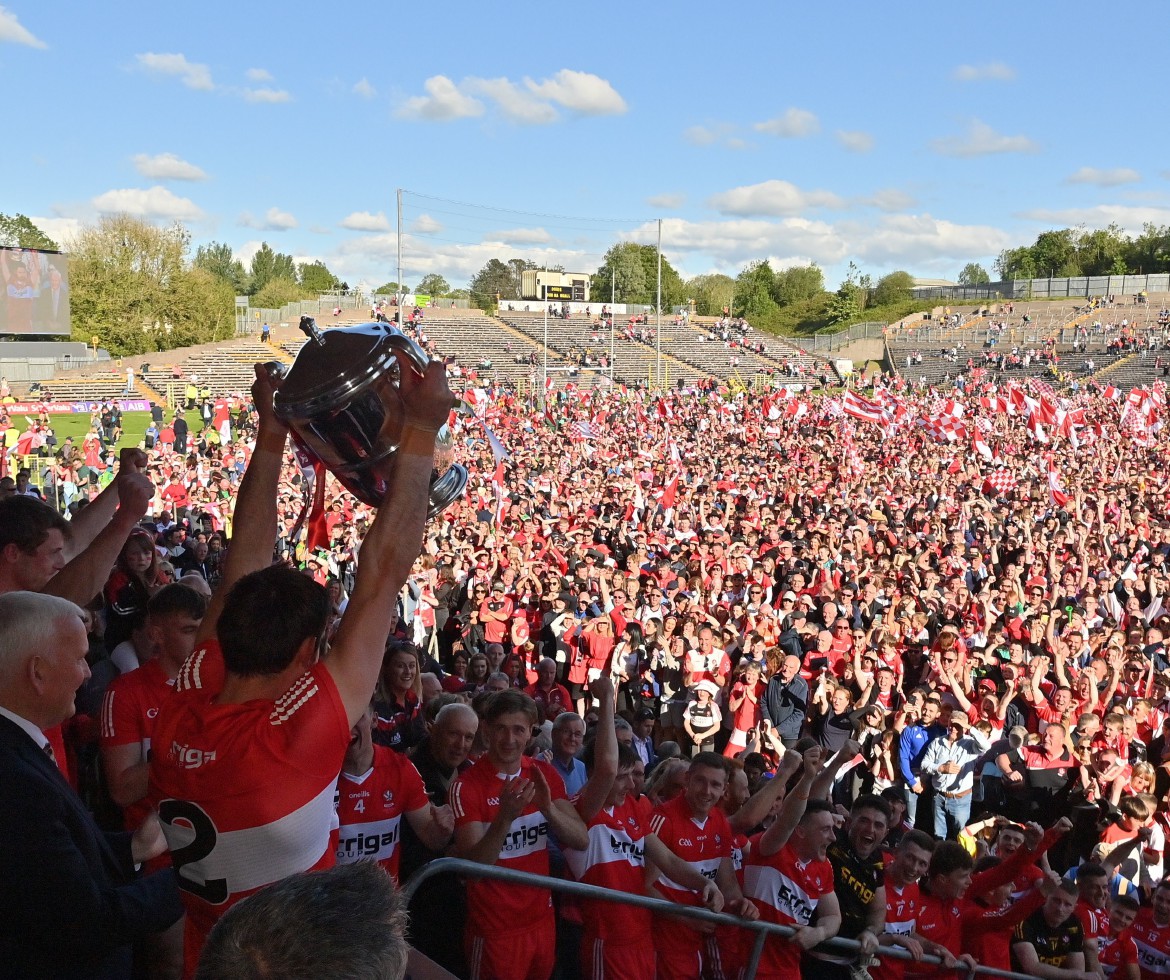 DERRY GOLD...Clones was a blanket of red and white after the Ulster final

I SAID to my young boy. “If we win, as soon as the whistle goes, we’ll jog to the car and beat the traffic.” At the final whistle, there I was in the middle of the stampede over the dugout, clambering across it like a scared calf careering over a cattle grid. Deep stuff the GAA.

If you are going to adopt the blanket defensivecounter-attacking game-plan, best to hire one of its co-inventors. Both Tyrone and Monaghan had made the error of pushing up on us, and duly suffered the fate of Dublin in the 2014 semi-final, Derry’s hyperactive defenders and midfielders cutting through them at will and puncturing them with goals. As a result, those games were exciting and vibrant, with Derry scoring freely.

Donegal did not do this. Instead, they were a mirror image of Derry. For the 2014 final, Kerry saw what had happened to Dublin in the semi-final when the greatest team the game has seen had thought they could defy the laws of physics. Kerry were not about to make the same mistake and as a result, we were treated to the most boring All-Ireland final ever seen.

I went drinking with Kevin Cassidy in Gaoth Dobhair in the winter of 2011. It was a few months after the infamous 2011 semi-final between them and Dublin. That was the day Jimmy had confiscated their mobile phones (presumably for fear any of the players would use them to organise an escape before the throw-in). I was savaging Kevin over their tactics that day and he said, “To be fair Seosamh, if there are 25 men inside the 21, it’s going to be very hard for Diarmuid Connolly to score a goal.”

When two teams set up in this way, the game is concertina’d into the last five minutes. There are long periods of not much happening. Then, as we approach the finale, a terrible tension fills the arena, and we are gripped.

It was interesting to note the differing generational reactions to the game. I was sitting beside the Derry minors, and they thought the game was very entertaining. For anyone under 25, after all, this is the norm. They do not know what the game was like before. Before Jimmy sacrificed the spectacle in the cause of winning at all costs, and before he replaced man to man contests with the cold hard laws of physics.

Afterwards, when I was walking through the throngs, I came upon Damian Cassidy, sitting in the back of his car like the Belgian ambassador as his son Peter chauffeured his famous father. “Awful spectacle,” he said, “but great to win.”

I agreed (waves of elation were coursing through me even the next morning) and made the point to him that young people know nothing else and would be surprised if they heard us say that. “What are you talking about Joe?” he said to me. “My young boy is only after saying it was a great game and I told him to catch himself on.” We both laughed. His son Peter blushed. Two minutes later, a text from Colm ‘Scillaci’ McGurk: “Great win Joseph. Terrible advert for football.” Or put another way, by solicitor and veteran Derry watcher Paddy McGurk, as we danced up and down on the pitch afterwards, “Woeful shite, but who gives a f***?”

The rule makers have refused to act, other than irrelevant tinkering. This is now the game. Over the last three years there was a sense that teams were voluntarily moving away from the blanket defence towards a more open game. However, as Kilcoo and now Derry have shown, done properly, this type of system works brilliantly. And with an obsessive perfectionist like Rory Gallagher orchestrating things, Derry’s system worked brilliantly.

The sun turns Clones into a bowl of dead heat, and I worried about our running game. I needn’t have. We rely heavily on our defenders both for our defending and scoringcreating scores, and here again, they did not let us down. In the end, Donegal were exhausted. The decision to play Michael Murphy at number 11, the engine room of the team, was a bad one. Derry targeted him throughout. Michael hasn’t the speed to stop the runner and once he went past, Derry had an overlap. He had a negligible impact on the game, jogging around in irrelevant areas of the field, hand-passing the ball back to the man who gave it to him and occupying a space in the blanket. If he is to continue with the county, he needs to be stationed at left corner-forward in a Dean Rock role. Playing in the engine room requires an engine.

Had it not been for our poor kick-out system (contrast with Donegal’s) we would have won this game easily. As it was, we kept them in it until extra-time, when they eventually cracked, Glass and Rogers sprinting through for the umpteenth time to deliver the killer scores.

And then, with 30 seconds to go, Kevin Cassidy’s words came true, when with 25 men inside the Derry square, it was impossible for even the great Michael Murphy to score the goal they needed. It was the biggest Derry crowd I have ever seen.

Bigger than our glory days, when a hardcore followed us everywhere, it was a testament to the great underage work being done throughout the county that has pushed participation in the women’s and men’s games to unprecedented heights.

As far as the eye could see, I saw every Derry person I ever knew, from men in their eighties to children of men I played with. When I eventually got back to the car, there were tears in my eyes.

Driving to and from Clones is not advisable. It is the Calcutta of Ireland. After six or so miles at 5mph, I stopped at the Coranney Inn, just before the spot in Cooneen where Sean South was killed. I went into the bar and a huge roar went up. In 1997, after we had won our last senior county title, Kieran McKeever and I (the veterans of the team), stopped in Greysteel, at the Rising Sun Bar.

In October 1993, a few weeks after we had won our All-Ireland against Cork, that small bar was the location of one of the worst massacres of the troubles. Three loyalist gunmen came through the door in balaclavas, shouted “Trick or Treat” and machine gunned the bar, killing eight men, women and teenagers. Four years later, Kieran and I sat in the half empty bar, drinking a few pints in more or less silence, soaking in what we had just achieved.

In the Corraney Inn on Sunday afternoon, as I supped my pint, my mind suddenly went back to that evening in the Rising Sun and I felt exactly the same sensation. I drove home in silence, and felt so good I didn’t even go to Maghera for the celebrations. Deep stuff the GAA.