I GOT a text from Sean O'Brien a few day ago. He is the coach of the brilliant All Saint’s, Ballymena u-16 team, All Ireland Feile champions from two 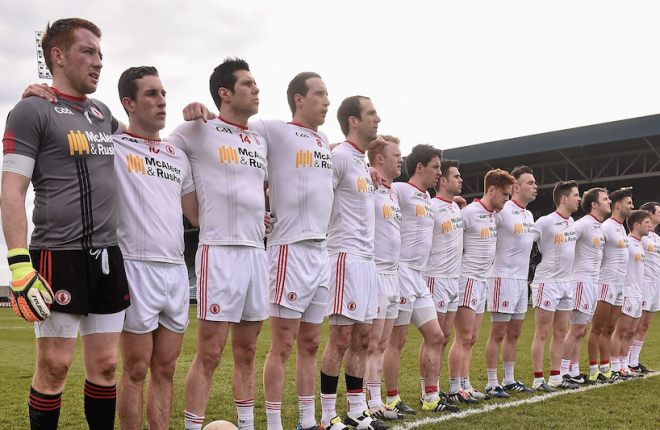 MISUNDERSTANDING…Joe Brolly has always been a fan of Tyrone, or so he claims

I GOT a text from Sean O’Brien a few day ago. He is the coach of the brilliant All Saint’s, Ballymena u-16 team, All Ireland Feile champions from two years back. “Hi Joe, Sean O’Brien here, would you be interested in a game with our u-16s?” I texted back “Sean, that’s like Hitler asking Belgium if they’d be interested in a wee war.”

Speaking of mismatches, Wee Joe and I got a lift to the Derry game on Saturday night with Des Fahy, my good friend from Drumragh. “I’m not sitting anywhere near you tonight” said Fahy, as we pulled out of his well-appointed driveway. “Why not?” “You’re on your own,” he said.

The fun and games started as we went through the gate. As I was standing for selfies with a crowd of Saint Enda’s footballers who were selling tickets, a parent of one of the Tyrone players walked past. “How are you?” I said. “You can f**k off Joe.” The boys roared in amusement. Fahy broke into a jog. The last I saw of him was as he rounded the corner, picking up pace. We were up and running. Which is more than could be said for Derry.

Under Paddy Tally and Brian McIvor, we were programmed into a wildly unbalanced defensive system that made us the most unwatchable team in Ireland. That programming is proving very difficult to shake off. The automatic instinct of the players is to rush back into the defence. As a result, we are playing without a presence in the half forward line, leaving Emmet McGuckin alone and palely loitering on the square.

Tyrone handled us with the minimum of fuss. On the way down, I said to Fahy we’d lose by six, on the basis that Tyrone were more systematic and had a better defence-attack balance.

By the end of the first quarter I was starting to think 15. Derry weren’t far off on the scoreboard but the game was already over. Our kick-outs were killing us. We had no attack plan. Our only successes were last-gasp interceptions deep in our own defensive area and the odd long-range point. We were simply reacting to Tyrone. Hoping for the best isn’t much of a plan. It is no plan at all against this Tyrone team, who are getting better and better. At times on Saturday evening, they looked like All-Ireland material. But to win that, they must now concentrate on the attacking part of their system.

Their defence is probably the best I have seen. Goals are more or less impossible. The phalanx Peter Donnelly has created, starting with the Qualifiers last season, is soul destroying for the opposition. Superbly positioned, they are no longer leaving the gaps that gifted that first round championship match to Donegal.

And as a sweeper, Colm Cavanagh could guard the gates to hell itself. On Saturday, he was magnificent. Even awesome. The first thing to note about Colm is that he is a brilliant physical specimen. Or as a Castlederg man behind me put it “A baste.” Secondly, he has superb positional sense. He also has absolute courage and puts his body on the line without hesitation. Finally, his work rate is enormous. The second Tyrone lost possession, he was sprinting back to the square to lock the gate. Time and again, he cut out through balls, caught anything kicked in high and generally destroyed Derry’s morale.

With Derry trapped in their defensive web and doomed, the only question in my mind was whether Tyrone’s attacking game is good enough for them to win an All-Ireland.

The difference between them and the other contenders is that up until now, Tyrone have been too conservative going forward. That has been slowly changing since Ballybofey, but they still have work to do. When Donegal attack, they go for it full bloodedly. So, against Tyrone in the first quarter last June, they sensed Tyrone were wobbling and blitzed them.

By the 15th minute they were seven points up and the game was over, with Tyrone left to spend all their energy on coming back. What Donegal did that day is what Tyrone need to work towards. They are 100% committed to defence when they defend. But they are still only at around 60% when they attack.

Tyrone, like the Dubs or Kerry, need to fearlessly commit to the attack when required. On Saturday, they showed it in snatches. They scored two goals but it should have been four or five, even six. Had it been Kerry or the Dubs we were playing it would have been that many. And for me, Tyrone have the potential to beat either on the big day. The defensive work is done. The obsession at training must now be attack, attack, attack.

Another thing that struck me about them was that Peter Harte is out of position at number 11. He is not a natural quarter back, as he tends to play with his head down and is a ball carrier by instinct. Which means the inside runners and the men breaking through are not being seen until it is too late. Nor does he have the very subtle positional sense that is required for the role.

If Brian McGuigan had been there on Saturday night, it would have been a cricket score. Of course, that is an unfair comparison, since McGuigan, for my money, is the greatest number 11 to have played the game. But Tyrone have a number of highly skilled, heads up footballers who could play at 11.

Richie Donnelly, for one, looks made for the role. He ruined us from left half-forward and seems to me to have every attribute. Young Meyler also looked the part when he came on. It is a crucial position for Tyrone and they must choose wisely. They are down to the fine margins now and it is clear they are going to be a major force in late summer.

At the final whistle, I went upstairs to the clubhouse bar and drank pints with Tyrone men, since there was nobody else there. As my father said after the Galway match the previous week, “ That would’ve been a great game if it hadn’t been for Derry.”

The ‘Miles for Matty’ team were there and it was a total privilege to spend time with them all. I left the club in great spirits to search for Fahy, who was lurking in the shadows. As I have said on many occasions, I love Tyrone. Any previous remarks on the subject have clearly have been taken out of context.