FIRST up was Derry v Cavan on Saturday night in Breffni. My father said he was only coming to avoid watching Armagh v Laois on telly. 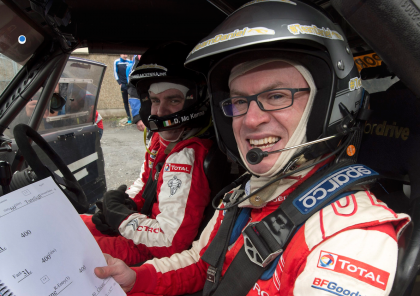 CAR TOURBLE…Joe Brolly had another adventure behind the wheel

FIRST up was Derry v Cavan on Saturday night in Breffni. My father said he was only coming to avoid watching Armagh v Laois on telly.

One of my nephews came with us and just outside Middletown he threw up all over my new car. I stood on the roadside in the freezing rain wiping the puke off the car seats with tissues doused in aftershave as the young boys raced around in the layby.

I had finished up and they were scrambling back in when they shouted and pointed at the back windscreen laughing. When he had stuck his head out the window – too late – it had blown back and splattered the glass. “ Oh for f*** sake” I said. They roared laughing as I reached for the aftershave and tissues again.

For the rest of the journey the car smelt of cologne with a hint of warm cottage cheese. My father held an impromptu disciplinary hearing, which wasn’t far off what actually happens in the GAA. The nephew was convicted of “Bringing the association into disrepute” by virtue of vomiting in the car en-route to a county game and banned from travelling to county matches for eight weeks. Some wouldn’t view that as a punishment at all.

At the moment the ball is thrown in, there is always a surge of excitement. Maybe it is that somewhere deep in our psyche, we recall the days when the games were actually enjoyable, like Pavlov’s dogs salivating when the scientist rang the bell. Or maybe it is the triumph of hope over reason that is the essence of the human spirit.

Tony McEntee said once during a meeting of the coaches in Crossmaglen that he couldn’t understand why teams played a blanket defence. In Cross, they view it as an invitation to win. They go man to man on the sweepers and hem the opponent into their own defensive area with a full court press.

This has three effects: Firstly, the sweepers cannot sweep, as they are forced to mark a man. If they drop off him, the Cross boys pick him out and he’ll score. Secondly, the defending team doesn’t have the luxury of working the ball out comfortably using the sweepers, as they are being man marked. Thirdly, the forwards (usually two maximum) left in the opponent’s attacking area are isolated. There is no prospect of being able to kick a 90-yard footpass to them, so the Cross full backs play five yards in front.

The opponent has no choice but to try to work the ball out of the defence under severe pressure. So, Cross score countless goals and points from turnovers. Usually after about fifteen or twenty minutes, the constant pressure takes its toll. Barcelona do this in soccer. It is a mystery to me why so few Gaelic football teams do it. The blanket defence has turned coaches into sheep.

Cavan have a few very good forwards, but they were entirely wasted. Paul O’Connor for example spent most of his time in the defence. Like Derry they had a strong defensive shape but absolutely no attack formation.

Which brings me to the second big tactical dilemma created by Jimmy’s monster. The obsession with preventing scores means that most teams put far more effort into defence than attack, with the entire half forward line usually camped in the defensive zone. So, when the ball is recovered, there is no option to kick long to a half forward.

Up until Jimmy transformed the orthodoxy, a wing-forward’s job was to be there for a long outlet kick pass for the defenders and to be the link between defence and the dangerous inside forwards. Without half forwards, there is no quarter back. Think Damien Barton, Brian McGuigan, Greg Blaney. Without them, the only option is to carry the ball out of the defence, meaning that by the time you’ve got it to the middle third, the other team’s sweepers are already in place.

When Enda Gormley took the reins with the Glen, Maghera underage teams, he solved this problem with a simple rule. At all times, there must be at least two half forwards in position. This had a number of positive spin offs. Firstly, it meant a culture of long kicking. This in turn meant they were not afraid to kick long, even if it was a little risky. Secondly, it defeated the blanket because the ball was kicked quickly over the heads of the retreating sweepers. Thirdly, their quarter backs in the half forward line had the ball early and in space, so they could pick out passes to the danger men inside. Fourthly, those danger men had space because the sweepers hadn’t time to get back. And finally, it looked bloody brilliant. The result? Glen minors won four Ulster Minor Club Championships in a row playing fantastic football. As Enda said in Con Smith’s bar in Butlersbridge after the game on Saturday “ Are ten defenders not enough?”

Next up. Antrim v Wexford at Saint John’s on Sunday. A carbon copy of Breffni. Ball thrown in, big cheer, then anti-climax. Michael and Thomas McCann were entirely wasted in Antrim’s full forward line. Like Derry’s and Cavan’s the night before, they didn’t have a half forward line so they might as well have been given sofas. In the end, they roved out to keep warm on a freezing day. Like the Breffni game, this one was won by a turnover goal. That aside, it was all smother defence, hand-passing and no risk.

The obsession with defending and keeping possession has destroyed players’ confidence in long kicking. At one stage in the second half in Breffni, Derry’s keeper Eoin McNicholl got a ball, looked long but didn’t give it, then hand-passed it to his corner back. They exchanged a one two. The crowd was roaring in frustration. They exchanged a further one two. Zzzzzzzzzzzzzzzzzzzzzzz.

I continue to be amazed that the coaching fraternity entirely ignores the Crossmaglen model in favour of a system that is unwatchable for spectators and hated by players. I can cope with the freezing cold and the long journeys. I can cope with the not winning anything for twenty years. I can even put up with a car covered in vomit. In return, is it too much to ask for a bit of football?
comment@gaeliclife.com