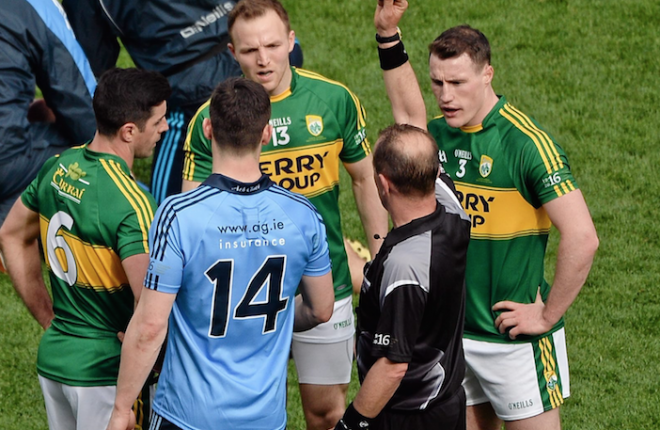 WATCHING the Laochra celebrations in Croke Park on Sunday reminded me of the episode of ‘I’m Alan Partridge’ where Partridge meets two RTE executives to discuss a series they want to make on modern Ireland.

Partridge nods and says “You know, I think the Irish are going through a major image change. I mean, the old image of Leprechauns, shamrocks, horses running through council estates, toothless simpletons, people with eyebrows on their cheeks, badly tarmacked drives in this country, men in platform shoes being arrested for bombings, lots of rocks, and Guinness. I think people in England are saying yes, Dere’s more to Oireland dan dis.”

Later, the topic turns to U2 and Partridge says “I love that song Bloody Sunday. Really encapsulates the frustrations of a Sunday. You get up, you’ve got to read all the papers, all the kids running around, you’ve got to mow the lawn & wash the car…and you think to yourself “Sunday, bloody Sunday.”

On Sunday, the GAA went for a mix of Partridge and The Quiet Man. Croke Park was full of toothless simpletons with whiskers on their faces wearing dresses, scowling, and waving swords. We also had a cailin with long red hair singing. To cap it all, there was Bono, as Irish as a Luxembourg tax haven.

A fortnight ago, our most famous tax evader appeared before the US senate and made a novel suggestion about how to deal with ISIL. To incredulous laughter, he said using comedians like Amy Schumer and Sacha Baron Cohen to lampoon ISIS would work far better than airstrikes. “Don’t laugh” he said, “I think comedy should be deployed. I’m actually serious. If you laugh at them, when they’re goose-stepping down the street, it takes away their power. So, I’m quite seriously suggesting that the Senate send in Amy Schumer and Chris Rock, and Sacha Baron Cohen, thank you.”

The only disappointing feature of the Croke Park parody was the fact that the King of the leprechauns didn’t make an appearance and grant everyone in the audience three wishes.

Earlier in the day, Tyrone confirmed the feeling that they might just be the second best team in the country. I was listening on the radio, the only bearable way to watch a Tyrone game. With 10 minutes to go and Cavan six points down, Tommy Carr, who could give Bono a run for his money, said “This game could go either way.”

With five minutes to go, he said “I’m starting to get the feeling Cavan need a goal.” After the final whistle, he said “In fairness, Cavan were never really in this game.” I watched the game later that night. It confirmed my view that Tyrone are close to an All-Ireland.

They are very powerful, very quick, and very mean. They also have high quality skills and make very few mistakes. Most importantly, they have a chemistry that was missing for several years, until their run through the Qualifiers last summer.

Their system, with Colm Cavanagh as the gatekeeper, makes it virtually impossible to score a goal against them. As Peter Donnelly’s coaching has taken hold, they have finally found a good defence/attack balance. When I watched them against Derry in Omagh I thought to myself “nightmare.” There was nil chance of Derry winning that game. I thought exactly the same watching them against Cavan.

I say they are close to an All-Ireland because only one team can win that. In the big game, Kerry, a bitter, mean spirited team under Fitzmaurice, threw everything they had at the All Blues.

It was a must-win game for Kerry. This current Dublin team has banished the old Kerry condescension. The days when the League was something to let other teams win before Kerry came up in September and put manners on the rest are a relic of the pre Gavin era.

Kerry fought for this as though their lives depended on it, which in a way they did. Aidan O’Mahoney was thuggish as ever. Shane Enright the same. A couple of Dubs were very lucky not to have been seriously injured. As is customary under Fitzmaurice, Kerry dragged and pulled and fouled and blocked up the central column.

The All Blues weren’t in the slightest bit fazed. They just kept coming at high speed from all angles, until Kerry’s mean spirit was broken. Half the Kerry lads didn’t even stay out on the pitch for the cup presentation, which tells you all you need to know about their ethos.

Afterwards, Fitzmaurice whinged to the press corps that “ Kieran Donaghy was raped and pillaged and the ref did nothing.” Which was almost as funny as Bono’s contributions to the US senate. In the 2014 final, Kerry put a saddle on Michael Murphy and rode him round Croke Park. The difference was that Michael sucked it up. Afterwards, Jim McGuinness never mentioned it, even though the skulduggery practised on Murphy was what won Kerry the game.

Not that it’s relevant Eamonn, but you were beaten by 11 points. And if Dean Rock had gone for goal from the penalty it would have been 13.

As for the GAA, if we keep going the way we are, we will soon be as Oirish as Bono.
comment@gaeliclife.com