WHEN Hales popped the two points to go one up against Rockridge in the Division 2A Chicago state high school semi-final. 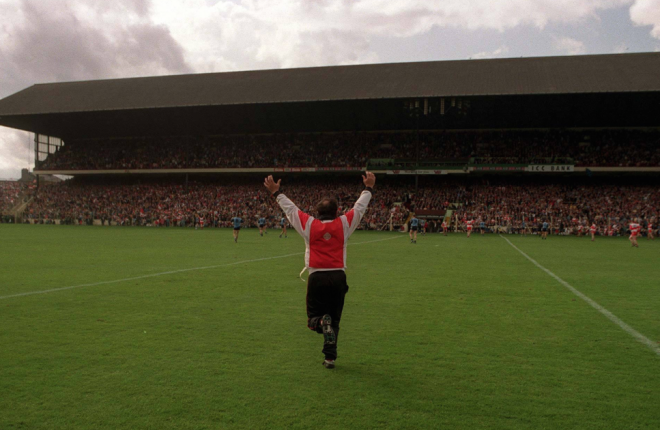 MAGIC MOMENTS…So few and far between in today’s game

WHEN Hales popped the two points to go one up against Rockridge in the Division 2A Chicago state high school semi-final, there was 5.01 seconds left on the clock.

“Both teams out of time outs” says the CSN commentator, “ This is it.” Rockridge threw in under their own basket to the point guard Whiteman, who picked the worst moment of his young life to slip. The clock was at 1.7 seconds when he threw it blindly over his shoulder as he fell to ground. To anyone, anywhere. It just happened to go to a Rockridge man, Carson Frakes, human bean-pole.

As it came into his hands, there was one second left and he was halfway inside his own half. “ Frakes to launch” said the commentator, as the ball left his hands a millisecond before the buzzer sounded and soared high into the air. Frakes stopped in his tracks and watched.

The crowd got to its feet and gawped. For that glorious half second, the arena was silent. Then down it hurtled, straight into the basket. The net danced. “It goes” roared the TV commentator. “ Oh my God, it goes.” There was a delayed reaction. The brain takes a while to absorb overwhelming events. Then looking as though he had been tazered, Frakes jumped and ran to God knows where before falling over. His team-mates leaped onto him and each other. The crowd was hysterical. Watch the video at Preps Talk CSN rockridge frakes hales. Above the madness, you can hear a woman squealing with something beyond excitement. She probably doesn’t even know she’s doing it. The moment has just taken her over.

This moment is why we are addicted to sport. When it happens, our system gets a hit of ecstasy and wonder. It’s impossible to describe it, but you know it when it happens. Listening to the woman screaming brought me back to Croke Park in August 1993 against Dublin.

When the referee knocked our changing room door that day and said “Time to go lads”, I could feel the shudder of noise and movement coming down through the old stadium. And I could feel something else. Something that is impossible to describe and can only be felt. The game was perhaps the greatest one ever played.

I remember at one stage going on a long solo run through the Dublin defence, just to show them I didn’t give a f*** about them. I started maybe 70 yards out. By the time I hit the 21 it was getting serious. “Goal” I thought to myself, as I was hauled down close to the 14. When I hit the ground it felt like it was moving. If the excitement was vast in that opening half, as the second period advanced towards its immortal conclusion, it was off the charts.

It was in that last quarter, as we reeled Dublin in, that I heard the screaming. A woman, above the throng, screaming and screaming. At that stage, some of the boys noticed the Dublin supporter on the Hill waving a blow up rubber doll. You can still see it on the video. Perhaps it was a last desperate attempt to inspire Charlie and the boys. Me, the only outside thing I was conscious of was the screaming.

When we went level in injury time, it was Frakes’s time. “This is it.” The Dublin kick out. I wheeled round and won the break. It was fever pitch. Fergal McCusker. To Henry Downey. To Dermot McNicholl. Johnny McGurk racing forward begging for the ball. Begging for it so he could win the game for us. Only Dermot fisted it way over his head and towards the sideline. So, Johnny had to turn and sprint after it. When he gathered it he was a few metres from the sideline. The Dublin defender didn’t come in to tackle. T

here was no need. All he had to do was shepherd him. He was going nowhere. But, as my old fellow said to McGurk afterwards “Cometh the hour..” When Johnny kicked that ball off his left foot the world stopped. I remember a feeling of dread coming over me as it went up. Maybe not dread, but something very heavy. Something beyond what we can understand. Then the black spot, the white flag. Johnny sinking to his knees at the final whistle and tossing the ball in the air. Something perfect. Something that can never be altered.

In Croke Park last weekend there was no magic. Just dull, workmanlike professionalism. County football has been losing its capacity to thrill us over the last five years.

We are reaching a stage where the magic has all but disappeared. Dublin walked all over Donegal in a terrible game. Kerry did the same to Roscommon, even if they made it look a little classier with their excellent skills.

It was a depressing day, right in the mouth of Championship, reminding us that there is no real Championship at all. We need a two tier championship urgently, yet it’s not even on the agenda.

The GPA says no because they asked the county players and they said no, which is like asking Carson Frakes if he’d like to play for the LA Lakers or Rockridge High School. We need to shorten the county
season drastically, yet Pauric Duffy couldn’t even persuade the county delegates to shorten it by a fortnight. While the authorities do nothing, the game is becoming a soulless, professional eye sore. Which is precisely what we had to suffer in Croker last Sunday, capped by Rory Gallagher telling us Donegal didn’t want to win anyway.
comment@gaeliclife.com