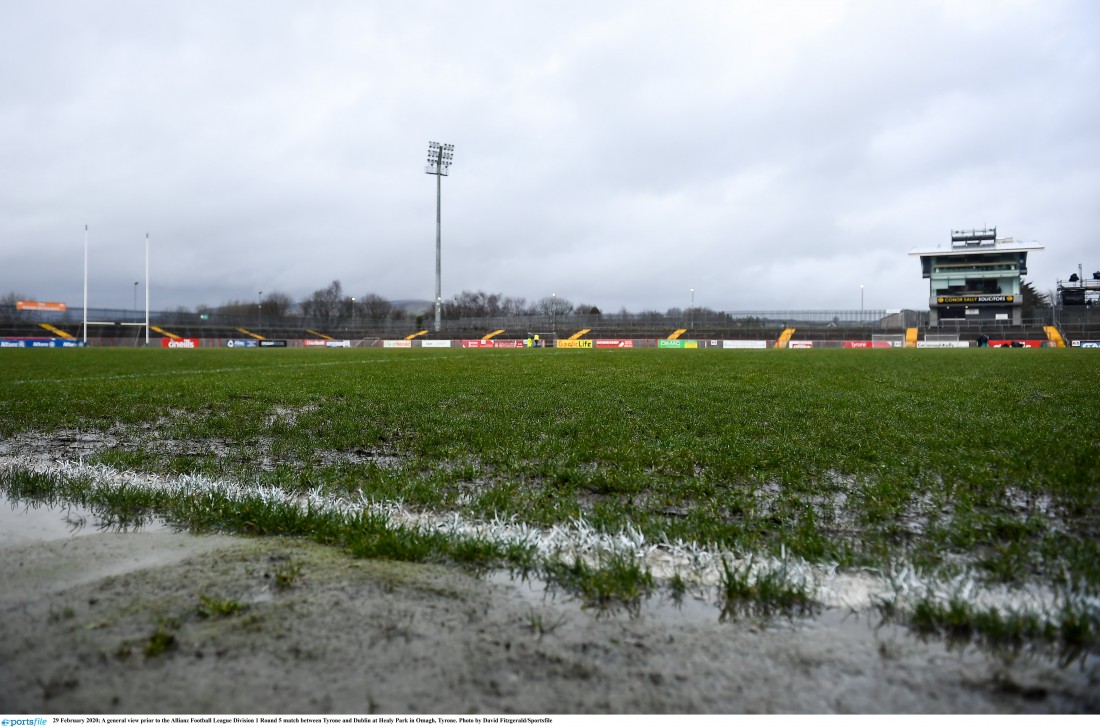 TO my knowledge, I was the first Gaelic footballer to wear tights. It was minus three in the Sperrins and we were due to play Kildare in the league that afternoon in Dean McGlinchey Park.

I asked my mother for a pair of her warm tights. “You’re joking” she said, even though she knew I wasn’t. “You’re wasting time. Tights please.” I pulled them on in the changing room to great laughter.

Ten minutes later when we hit the field they weren’t laughing. The pitch was rock hard. A bitter wind swept across it. Kildare’s Davy Dalton wore a woolly bobble hat. Anthony Rainbow, who was too finely set for football in the Sperrins, suffered hypothermia and was taken to hospital. The game shouldn’t have been played but in my day there was no such thing as a pitch inspection. Think Clones 1993 when we handbrake-turned round the submerged pitch sending up cascades of water.

Having said that, I cannot ever remember worse conditions than last Saturday night in Omagh. When I arrived into the TV truck before the game it was swaying in the gale, like a boat. I had walked the length of the pitch beforehand and it was clearly unplayable, the central column of the field from posts to posts covered in surface water.

Cormac Reilly arrived out for his inspection with an O’Neill’s ball. He kept lobbing it into the air and watching it drop dead in the water. Five times he did this. Five times he shook his head. Then, he held up his arms as if to say “This is pointless.” Eir had a man on the ground with his mic turned on so we could hear everything.

But somehow it went ahead and Mickey Harte appeared happy.

As he said later (he still speaks to some broadcasters), the pitch was “fine, apart from a few patches.” Dessie could be heard on the mics saying it should be postponed, but the decision had been made, and what followed could have been an episode of Total Wipeout, players slaloming around on the pitch, water splashing up as they ran, shots for points boomeranging around the place like novice golfers belting balls off the tee.

Mickey’s decision was a wise one. He knows that Tyrone’s blanket defence is perfectly suited to such horrendous conditions.

Normally, when they drop back inside the ‘45’ and defend zonally, Dublin cut them to pieces (think the 2017 semi-final).

But this requires delicately weighted hand-passing, quick change of direction, and the ability to move the ball quickly around and through the blanket.

In these conditions, such football was impossible. Dublin tried it, but got nowhere, and it was only a superb first-minute goal from Colm Basquel, from an extraordinary hand-pass from Howard when he was surrounded by five Tyrone defenders, that kept Dublin level by half time.

By that stage, our commentary box, 20 feet above ground, was flooded and the gale was threatening to blow it over. We felt like the little pigs in the children’s story.

Tyrone came out early for the second half and the Dubs left them on the field for a full seven minutes before joining them. I imagined the Dubs peeking out the windows wondering whether it was worth going out at all.

What is certain is that after a five-minute spell coinciding with Padraig Hampsey’s black card, Dublin played the remainder of the game without enthusiasm, their intricate passing game failed entirely and when Niall Morgan kicked three simply miraculous long-range frees through the storm, the upset was on.

With Scully off on a black card, Dublin maintained a pretence of calm and brought it back to 1-7 to 1-7 but when Rory Brennan hurtled through from centre back to blast a terrific goal, it was over, and Harte’s interventions were justified.

Of course this changes nothing. Tyrone won because their otherwise out-of-date blanket system was perfectly suited to the tempest, which reduced Dublin’s state of the art attacking method to rubble. Tyrone conceded the Dublin kick-outs from start to finish, allowing Evan Comerford to kick the ball to his full-backs with ease. However, this meant Dublin were starting to run the ball from their own full-back line, Tyrone having long since retreated behind their ‘45’.

In these conditions, the attacking team needed to be shooting from no more than 25 metres out, and it was impossible for Dublin to work their way through to this marker. Tyrone meanwhile were breaking in numbers when they turned the ball over, running hard at Dublin. Their defenders broke their markers, working like only an underdog can when he feels the upset vibe. Liam Rafferty in particular sickened Dean Rock, bursting his lungs with a series of 100-metre sprints, scoring from play and almost scoring a terrific first-half goal.

Tyrone are the most boring team in Gaelic football and they enhanced that reputation in a game that should never have been played. But they needed the points, Mickey knew the weather gave them their best chance and when it came to it, the Dubs didn’t fancy it and could not cope with Tyrone’s courage and drive, something that will not be a problem come the summer.

For Dublin, the only worry is the injury to Jack McCaffrey who was brought on at half-time. This was a stupendously bad decision by Dessie Farrell. Muscles have to work overtime in county football, but with this game being played on an ice rink, those muscles were being pushed to their limits. Beyond that, the game was meaningless for them.

Afterwards, Rory Brennan, the match-winning hero, was presented with the Man of the Match award, interviewed on telly and looked as though he had just been given very bad news.

Next up Dessie Farrell, who seemed even more forlorn. It was like a manic depressives convention. When we were playing we had tremendous fun on and off the field. Fergal McCusker, Johnny McGurk and me were discussing this in Boyle’s before the u-20 semi-final earlier in the day, and wondering what is the point of playing inter-county football now given how terribly dull the life is. Brennan should have been bouncing. Delighted. Happy to be alive. Yet, the best he could offer was, “We are the same Tyrone team beaten by Galway last week.”

Afterwards, we sat in the truck, as it swayed and groaned, and cheered ourselves up by watching iphone footage of the fight at half-time. I will not be co-operating with any Croke Park investigation. No Brolly has ever cracked under interrogation.