THE hysterical reaction from a few people to the discussion in the RTE studio on Sunday is a smokescreen. 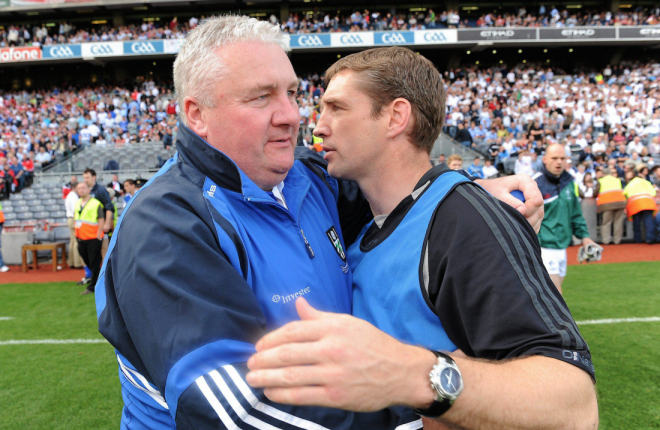 THE hysterical reaction from a few people to the discussion in the RTE studio on Sunday is a smokescreen. Kieran McGeeney’s managerial performance is a matter of public record. As is the serious ill health of the county game and the damage it is wreaking on the clubs.

“Poisonous and personal” said Paul Grimley, before accusing me of using my kidney donation and charity work as a defence against criticism. The man is an irony free zone. There was nothing either poisonous or personal about what I said. Now the Armagh Board has made a complaint to RTE. Spineless isn’t the word.

I have offered to debate these fundamental issues on live TV with a member of the Armagh Board. Let them come on TV and explain why the county players don’t play club football. Let them explain what the relationship is between manager and board. Let them detail their fund raising initiatives. Let them detail their expenditure. Let them set out their relationship with the clubs. Is the Armagh manager being paid and if so, by whom and how much? I have a lot of other questions as well. The real problem the Armagh board have is that what I said is true and everyone knows it’s true.

The massive positive reaction on social media from Armagh folk speaks for itself. My father says everyone has a role in life. He says that mine is to voice what everyone else is thinking but afraid to say. I don’t know about that but I know it’s high time a light was shone on what is going on with county boards and county teams. The main reason we have gotten into this state is precisely because of the conspiracy of silence.

It is an open secret that county senior football has been sick for a long time. I described county footballers as “Indentured slaves” two years ago and it caused a huge stir. But it was true. Now, very few people think differently. County football used to be great fun. It used to be sport. It represented the best of what we were. Now, it is an entirely cold, humourless, ruthless, professional enterprise, benefitting only the few. The players are tied to the wheel. The county game takes everything they have, giving more or less nothing in return. They can’t talk about the game, save in cliches vetted in advance (“Leitrim are a great team and we’ll have to be at our very best to beat them”). They can’t have a pint unless they wear a balaclava and sip it through a straw. They have no private lives.

Surgery is now part of their routine. The GPA’s latest surgery/injury stats are truly shocking. They have to eat and drink what they’re ordered to. I saw a weekly information sheet for one of the big counties last year and was flabbergasted and depressed. The players’ week was mapped out to the finest detail. One portion of the document read as follows: “Tuesday. Get up before 8am. Eat breakfast at home.” Eat breakfast at home? Jesus wept.

Gaels everywhere are starting to ask the question “ what is the point?” What is the point of Derry spending £250,000 a year on the county senior team? Of our lads being segregated away from the clubs? Of training seven days a week and going for training camps in expensive locations? Is it worth destroying the amateur ideals of the GAA for a few championship games a year? There are some counties that have a more balanced approach. Not to the uber professional training regimes, which are the same everywhere, but to the club/county balance.

Paraic Duffy, who sees precisely what the problems are and has laboured in vain to try to solve them, rang me on Monday morning to discuss what I’d been writing about and saying over the weekend.

His own county – like Kilkenny hurlers – has a simple approach. The county manager has no say over whether boys play for the clubs. In Monaghan, there are 18 league games. County players play 14 of them. The other four are starred, with everyone knowing in advance they will be played without the county men.

In Monaghan, they have already played seven league games. The county players have played every one of those. On Tuesday night past, they had their first starred game of the season. No one objects to the county men missing a club game four days before their Ulster Championship match this Sunday. The result is a healthy balance, where players can enjoy playing with their clubs. Which means they continue to give the club their first loyalty. It gives them variety and a break from the grind of county training. It keeps them fresh. It’s a bit like parole. By contrast, you look at Armagh and you see a depressed looking, dysfunctional group. Tetchy, indisciplined and mentally tired, which helps to explain why Cavan got so many easy scores on Sunday.

Our young men are exhaustively fitness and health tested. They cannot develop their lives outside of the game. Their only third level outlet is at a college where they can get a scholarship to do exactly the same thing that they’re doing with their counties. Namely walk around in tracksuits, train three times a day, don’t socialise and don’t say anything.

I bumped into Cillian O’Connor at the Crossmaglen Castlebar club semi-final in February past. Cillian is one of the few who has gone on record to say that things are dysfunctional. I asked him if things were easing up in light of the debate that has been ignited over the last two years. “ No Joe. It’s getting worse.”

As the game has become increasingly unhealthy and damaging to our young men, the GAA hierarchy has closed its eyes and adopted a hope for the best policy. They couldn’t even bring themselves to put back the All-Ireland finals by a fortnight to relieve the tiniest fraction of the pressure on players, which tells you all you need to know.

Paraic Duffy begged them to support his plans. He even watered them down because as he told me before congress “it’s the only chance of getting them through.” But no. Money was more important than principle. As the game has become a business, players have become pawns in systems. Every angle has to be covered in minute detail, down to where players stand in the blanket defence. Against Derry, it was clear that Tyrone, borrowing from Donegal, have developed a system of calls, like American football or professional rugby.

Alongside the footballing myxomatosis unleashed by Jim McGuinness, in every county, development squads have spread like the plague, turning players into robots from the age of 14. I have seven lads from my u-16 team in these squads and for 15 year olds, their physiques are frightening.

My own son has a body like Bruce Lee and trains daily. When I went to our club hierarchy last year and pleaded with them to withdraw all of our players from the development squads until minor level, they refused. Parents liked it. The boys got county kit. They were county footballers. I am seeing for myself how they are already being separated from their clubs. How their loyalty is being taken by the county. At the age of 14! Core work, weight training, blanket defending, nutrition. For Jesus sake what about letting them be kids? What about letting them play football for the sheer enjoyment without putting everything under the microscope and squeezing every last bit of joy out of it?

This professionalism promotes the individual over the team. I have noticed that it promotes self obsession. By the time they are 18 football is a job. They step onto the treadmill of Sigerson football, flower arranging at DCU (official partners of the GPA) or looking out the window of a lecture theatre in UUJ. Digs paid, fees paid. But at what price to the lads? They hit 30 and they’re no use to anyone anymore. What happens then?

Even the GPA, who have cheer-leaded this descent into professionalism, are beginning to see the extent of the problem. Last week, they released one of their mostly bumph press statements. But the finale wasn’t bumph.

“There are growing concerns regarding the future of county football and hurling vis a vis the demands being placed on players. There is now a strong appetite to examine the sustainability of the current county game model from the important perspectives of player welfare and the overall enjoyment of the playing experience (boy are these guys fluent in bullshit). This analysis should consist of various elements including a greater sense of hope or optimism for players in relation to fixture scheduling, the structure and competitiveness of competitions, the increased demands on players’ time, the physical and emotional consequences, the impact on life outside the game…”

The release goes on to quote Dessie Farrell (sponsored by Colgate, Nike, Irish Stairlifts and official partner of Colostomy Bags Ireland, Brylcreem and Tasty & Tempting Food at Supermacs) as saying:

“ More and more players find themselves under increasing pressure – physical, emotional and financial, due to the exceptional demands being placed on them. ( He neglects to mention that he and his colleagues have helped to drive those demands. Just six months ago, for example the GPA recommended a new championship structure that increased the number of games by forty.) We need to be conscious of the darker side of modern day sport… to ensure that players want to continue to play and enjoy the game. He then spoils it as usual by concluding that it is crucial that ‘ the games realise their true potential in terms of growth and prosperity.” (“in tandem with our partners at Audi, McDonalds, , and Portaloo Ireland Ltd.)

I have been saying all of the above for years. I have met the hierarchy on many occasions and set it out in stark terms. I have written about it regularly and discussed it on TV and radio. I put a set of proposals to the president and having considered them he said they were “too radical.” Better just to say that everything is great and we’re all brilliant and the games are great and the players love it.

For me, the GAA is intensely personal. In contrast to the growing number of managers and hangers on for whom it is strictly business. I await the Armagh chairman’s response to my invitation.