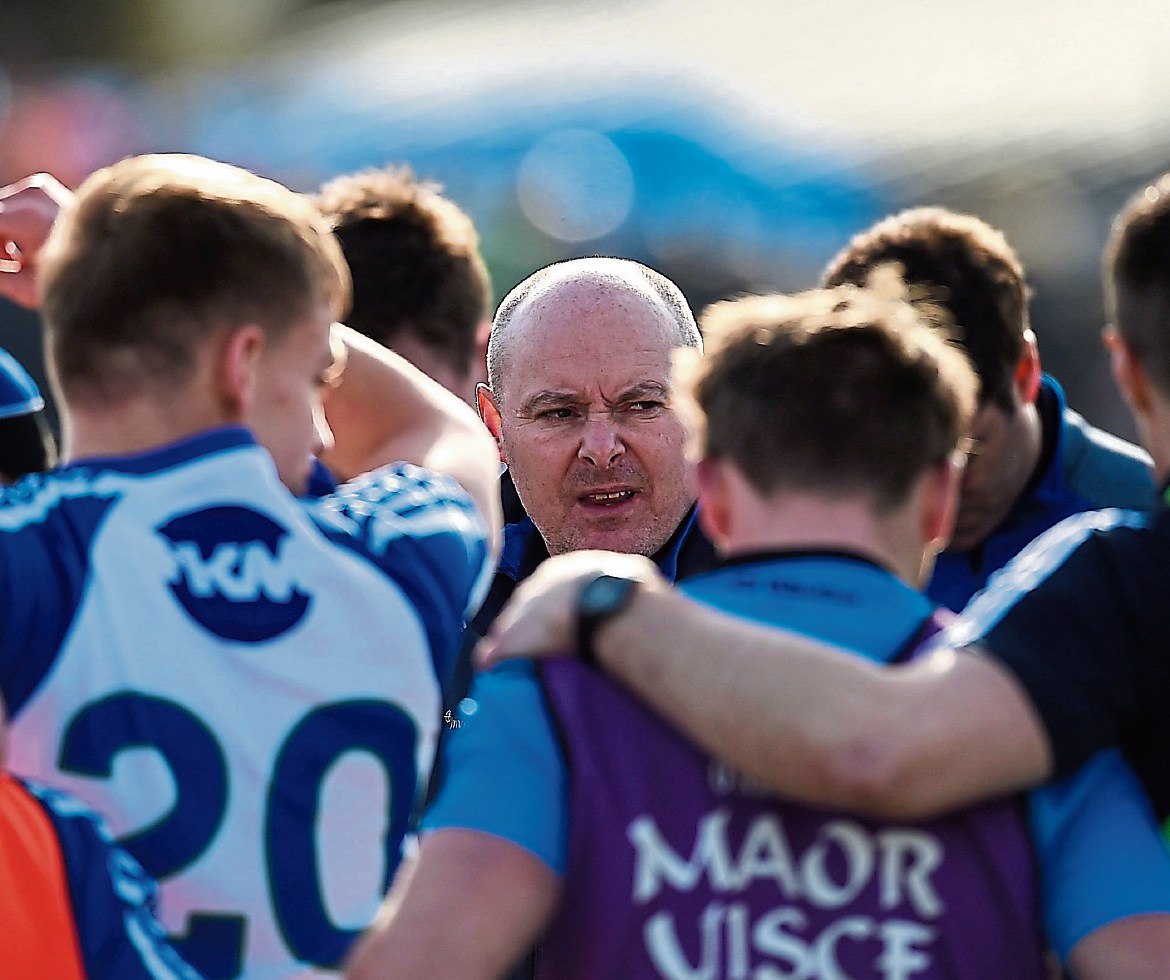 Malachy O'Rourke has led Glen to the Derry final

AFTER a record four Ulster minor championships in a row from 2011 to 2014, and doing nothing since, Glen Maghera are finally a serious senior team. Enda Gormley did the spadework for this group, teaching them the mysteries of the game. Time, space, long accurate kicking, adventurousness, and chemistry. They thrashed all comers for four consecutive years at minor level. In their swashbuckling Ulster minor club final performances from 2011 to 2014, they won by 18 points v Armagh Harps (2011), 9 points v Killeavy (2012), 5 points v Silverbridge (2013) and 5 points v Southern Gaels (2014). I was at those games, and they were sensational. “It is only a matter of time” we agreed, “before Glen win a senior championship.”

The Glen club has been a mystery. Huge talent. No senior championships. Ever. It was the same when I was playing. They were loaded with serious county players and Hogan Cup winners but if you got them in the draw, you didn’t give them a second thought. Now, things are different. Malachy O’Rourke is over them and Malachy doesn’t do hiding places. This Sunday, their character will be subjected to the Sleacht Néill test.

The last time they played in a county final, against Rossa a few years ago, they wimped out. A few star players underperformed, the group was headless, and it was embarrassing. I didn’t contact my friends from there for a month, not wanting to intrude on their grief. Under Malachy, the culture has been transformed. The bench is his best friend. Playing soccer? The bench. Not working hard for the group? The bench. Anything less than ferocious application? The bench.

It is something I have written about before. Pat Gilroy ripped the head off the Dublin football self-satisfaction monster. He banished Ciaran Whelan, Jayo, Diarmuid Connolly (for a full season), Mark Vaughan and left Bernard Brogan on the bench for five league games. By 2011 they were modest workaholics in a greater cause and by September, they were All-Ireland champions. With Malachy, even Derry senior players are under the micoscope. Last week, he left a Derry first 15 regular on the bench for the semi-final. The result of this is inevitable. A team of equals fighting for each other, uninterested in self promotion. In the semi-final they had 12 different scorers and no stars. I believe they will play with honour and humility this Sunday in the final. If they do, the result will take care of itself. As one Glen die-hard said to me last week, “Malachy is allergic to frauds.” Frauds are a destroyer of teams.

Speaking of frauds, I was in Ballina recently to see Belmullet against Breaffy in the Mayo quarter final. Before the throw in, I met Ryan O’Donoghue’s mother. Like many Down people, she lacks self confidence. “He gets his football from me” she said, puffing on her cigarette, daring me to contradict her. Funny, watching her son’s performance put me in mind of Wee James McCartan. Belmullet were far too tough for Breaffy, who ghosted around the periphery of the contest and seemed to be surprised by Belmullet’s ferocity.

Championship is hard to win. Very hard. It is first and foremost about character. The Belmullet men have no trouble in that department, but O’Donoghue is a different level altogether. He was injured after a few minutes and had to go off for treatment. When he came back out for the second half, he gave a masterclass in winning. He barely had the ball. Conditions were very difficult. Breaffy were all over him, dropping a second defender back to double mark him. It made no difference. The kid set up the first goal with a brilliant catch and diving handpass. Then, at the crunch, he expertly used his arse to outmanoeuvre the two defenders under a high ball and caught it over his shoulder. When he won possession, he was on the left hand side of the goals, about five metres out at an acute angle. Rob Hennelly advanced. Ryan lobbed him into the far corner with the instep of his left foot, and that was the end of that. It was an Eric Cantona moment. Rob turned to see the ball sitting inside the far post, a look of disbelief on his face. It was one of the best goals I have ever seen. The key moment in the game was when Aidan O’Sé briefly grabbed O’Donoghue by the throat. O’Donoghue (all 5’8’ of him) took the big man by the throat and jabbed him in the face three or four times, marching him hard towards the sideline. O’Sé pulled away and slunk offside as players from both teams crowded around. The Belmullet crowd roared in delight. After that, there was only one winner. The kid is proper. Serious. Hard. A winner. A man to build a team around. I congratulated his mother on the way out. “I told you he’s a Down man” she said. James Horan was standing close to me watching. He must be seeing something different.

The day before it was Knockmore v Ballintubber, a wonderful, crazy contest that had us gasping and laughing and holding our heads. Ballintubber, 3 points behind with time up, were awarded a penalty which wasn’t a penalty. The Knockmore players encroached on the free taker, but so did the Ballinubber players, so it ought to have been a throw up. I rang David Gough to check it. “Outrageous” he said, “A clear misapplication of the rule.” In fairness, asking David to analyse other referees is like asking Ronaldo to do the punditry for a pub tournament on Facebook. In any event, Ryan McDonnell, their 19 year old sub goalie who had only just come on to the field, made a heroic diving save and the stout hearted men of Knockmore had won. McDonnell was hugged and swamped by his team mates and family, as happy tears dripped down his face. A strong, humble, vibrant community. Like Sleacht Néill or Ballyhale.

My only real complaint about this time of year is the serial mangling of the anthem. The words “And now X, who was runner up in the Scor, will sing our national anthem” are enough to pass a chill over the stoutest heart. X rarely knows the words, generally uses a country and Irish accent, and sings the anthem so slowly I want to reach for the prozac. The anthem is a song to accompany men into battle and must therefore be sung with vigour and at a brisk tempo. Warriors need to be inspired, not sent to sleep.

During his time as the announcer at Celtic Park, Gerry Donnelly was not a fan of Scor runners up. After one young lady had strangled the anthem before a league game, he muttered over the loudspeaker, “Holy Mother of God.” Which got a big laugh. On another occasion, he was overheard to say, “that was borderline treason”. Gerry also used to do the Derry pen pics for the championship programs, and I am delighted to see he has been let loose on the pen pics again during the current Derry club championship.

Once, he listed Ronan Rocks as a “metallurgist”. Gerry told me that a few days after this appeared in a National League programme, Ronan rang him.

Ronan: Gerry, what’s that you’ve put me in the programme as?

Gerry: It’s an expert in metallurgy.

Ronan: Yes, but what is that?

Ronan: Would my mother be happy with me having that job?

Gerry: She’d be over the moon, son.

Jonathan Niblock from the Rossa club in Magherafelt was another one who got Gerry’s phrenic nerve going. For the Ulster quarter-final in 2001, Jonathan’s occupation was listed in the programme as “taxidermist”. We won the game and about a week later, Gerry got a phone call from Mrs Niblock to say people had been calling at the house asking if Jonathan could stuff their pet labradors and rabbits. One man had arrived with a pheasant. “Could you change it for the next day Gerry, it’s an awful nuisance?” “No problem Mrs Niblock.”

In the Derry championship so far, he has described various players as zoologist, bridal boutique owner, political analyst, karaoke singer, abattoir cleaner, Guide Dog walker, and séance host. A warning to all Scor runners up: Gerry has been invited to reprise his role as announcer at this year’s county final. In an effort to ensure you do not arouse his lethal wit, I have written down the words of the anthem phonetically.

Memorise them. And sing them as fast as you can.