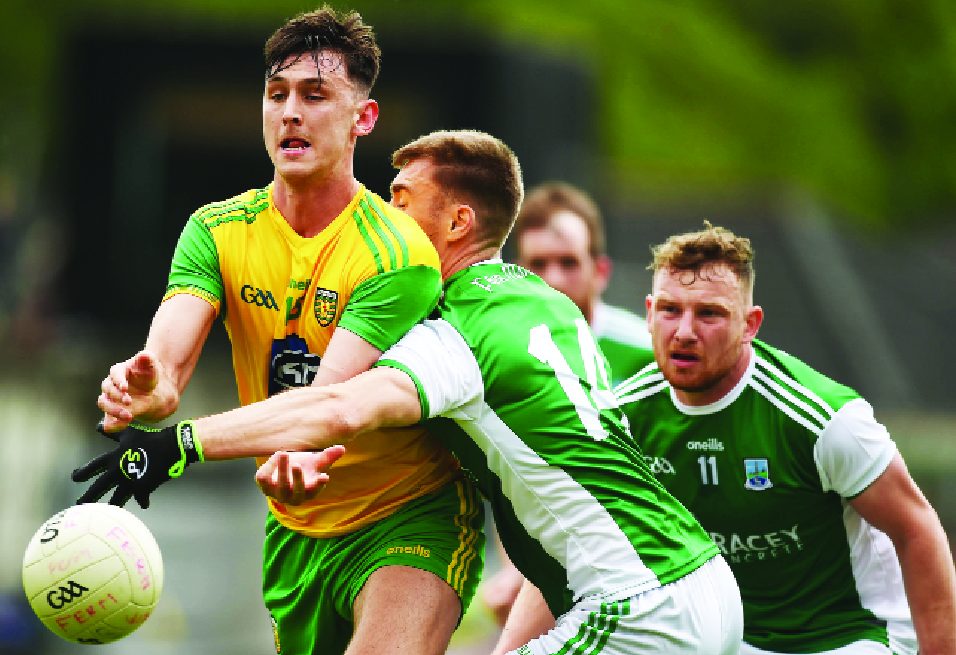 I’M starting to worry about Oisin McConville. At half-time in the Donegal game, if game isn’t putting it a bit strongly, he said that you had to admire the way Fermanagh were nullifying Donegal. He might have added “and nullifying all forms of human excitement, positive emotion and everything else that makes life worth living.” Oisin best be careful, or he will be run out of Crossmaglen.

Rory Gallagher’s point is that he is doing his best with the panel available, but if that is the culture that is established, you are doomed. The message is “we are not good enough to attempt to play football.” What happens then is that skilled footballers become superfluous and marginalised. Obedience to a micro-managed system takes the place of football and self expression. In the end, the game is reduced to a farce and the team becomes the subject of scorn and humiliation.

Carlow, Fermanagh, Tyrone (before this season), Galway, etc. Fermanagh kept the scores down, losing by six this time instead of 16, while the rest of us were losing the will to live.

The atmosphere at the game was something akin to what one experiences on the moon, with the only sound being Rory Gallagher bellowing “DON’T FOUL” when Donegal approached their ‘45’ (this was in stark contrast to the systematic fouling of Donegal players in the middle third to prevent them attacking before the robots were in their isolation zones) and “GET BACK.” If they were any further back they’d have been in the car park.

Let us take Crossmaglen. It is a small village surrounded by a host of strong clubs. Their philosophy is (and Oisin was at a day-long seminar in the club I was at several years ago where this was debated) that they would never succumb to this type of strategy since it was contrary to the basic ethos of the game.

As Tony McEntee put it that day, “We want young players to be excited about the prospect of playing football for Crossmaglen, and that means a culture of playing proper football. We have a duty to future generations. ”

The process of destroying football is well underway now in Fermanagh. If Rory is there for much longer it will take many, many years to reverse. Look what has happened in Derry. Look also at Galway, who have forwards that can match the Dubs but who spend most of their time labouring in the defence, pointing and shuffling around, keeping the scores down. Fermanagh is a small, intensely proud GAA county and what they are in danger of doing is losing their self-respect.

I remember an Ulster Club quarter-final against Newtownbutler in 1997. They had a small pick and were coming up against a very powerful Dungiven team. They got wired into us and to me in particular.

I had my ears warmed more than once and my man was sent off. We won, but we knew we were in a battle. They left nothing behind. Nor did St Michael’s, Enniskillen. Thrilling winners of this year’s Hogan Cup. Nor Enniskillen Gaels, who stormed to victory in the prestigious Ulster Minor Club CHampionship in 2017. Where were the flair players for Fermanagh on Sunday? Planning to travel to the US for the summer? At the pictures? Where?

The previous night, Mayo publicly self-destructed again. A lot of Mayo ones turned on me during the week for my analysis on TSG but what did I say? That the ’keeper made a terrible mistake? That he ought not to be there, with David Clarke sitting on the bench? That they panicked, lost their composure and had to be content again with failure? That there is a culture of hero worship and individualism around the squad that means they will never win an All-Ireland? The day after, Enda Varley, who used to be in the squad, tweeted

“Yes, Mayo deserved criticism but there has to be a balance to it. To single out individuals for personal attacks is cowardly from Joe Brolly. Learn how to analyse a game!”

This along with a lot of sentimental guff about this team being heroes and only not winning an All-Ireland because Dublin are such a great team, etc.

The reason that Pat Holmes and Noel Connelly were deposed by a players’ coup (Lee Keegan and David Clarke voted against) after they had narrowly lost the epic 2015 All-Ireland semi-final replay to the Dubs, was that they had tried to change this culture of entitlement. Holmes tells the story about dropping one player for the Connacht final in 2015 and getting the response “What the fuck do you think you’re doing? Do you know who I am? I always play when I’m fit.”

All that the two boys were doing was precisely what Pat Gilroy did when he took over the spectacularly self-absorbed colossal heroic losers that the Dublin footballers were in 2009.

In two years, they became a modest, respectful collective, where the individual was irrelevant and social responsibility was at the core of everything they did. The difference was that the Dublin board under John Costello backed him to the hilt. In Mayo, a weak board dumped two of their loyal servants without blinking.

James Horan said afterwards that their reign had brought dark days for the players. Cillian O’Connor said they would now have a better chance of winning the All-Ireland. How did that pan out Cillian?

Out went the celebrations and the big star behavior in Dublin. In came a serious football team with a serious winning culture. This is what Jim Gavin inherited in 2013 and we see the critical importance of this. Without that culture, Sam Maguires would not be possible. As Mayo have discovered.

While Dublin were quietly training for Louth, the Mayo team was paraded around New York for five days, where half a million was raised at one dinner for their fund. Imagine the Dubs doing that?

Mayo supporters can give out all they want and describe their team as heroes (Cillian O’Connor said that after the 2017 final) and all the rest. The bottom line is that unless they shed this culture of entitlement, they will always be heroic failures.