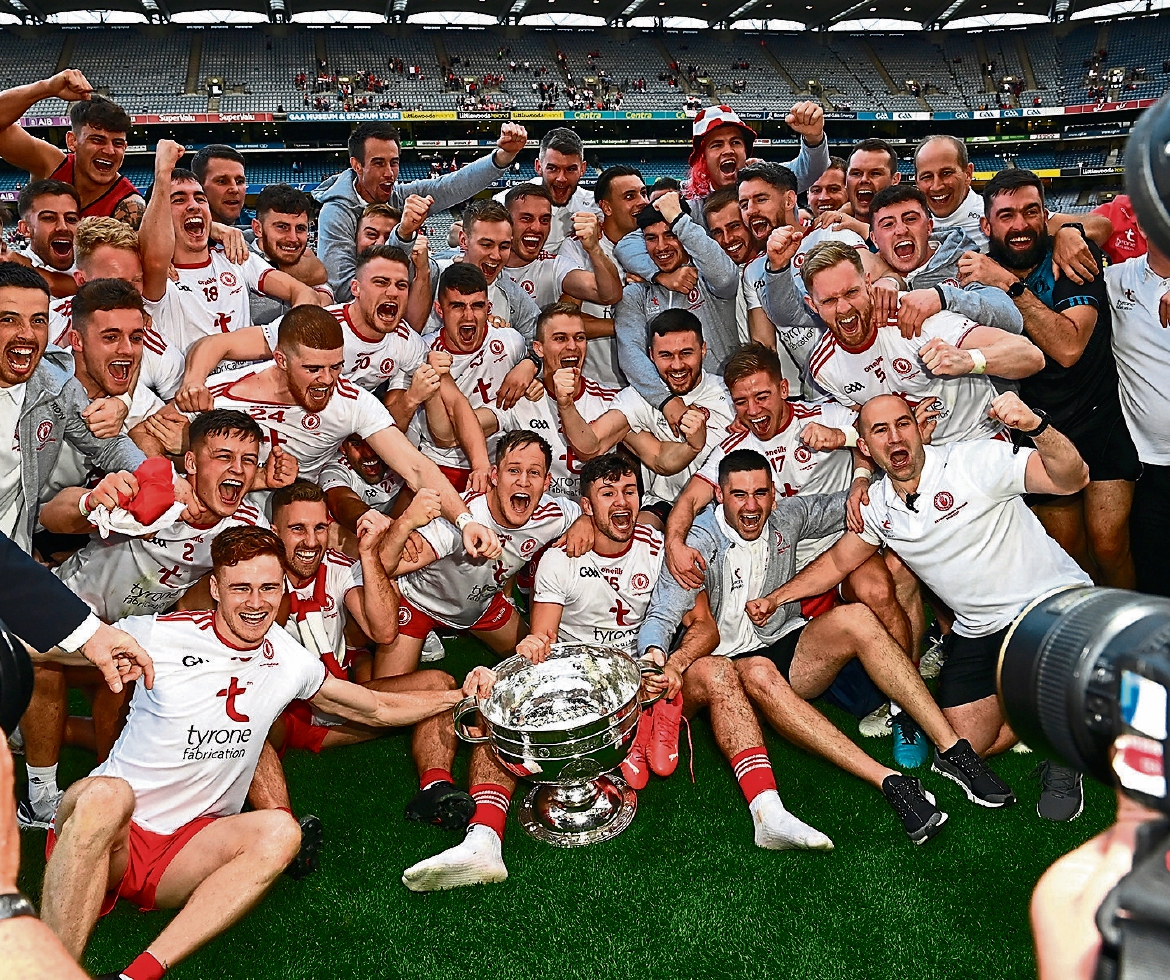 CHAMPIONS...The Tyrone team celebrate after winning the All Ireland final of 2021. MC 20

We marked the pitch:
four jackets for four goalposts,

That was all.
The corners and the squares

Under the bumpy ground, to be

When the time came.
And then we picked the teams

And crossed the line our called names drew between us.

Youngsters shouting
their heads off in a field

As the light died and they
kept on playing

Because by then they
were playing in their heads

And the actual kicked ball
came to them

Breathing in the dark
and skids on grass

It was quick and constant,
a game that never need

Be played out,
some limit had been passed,

There was fleetness,
furtherance, tiredness,

In time that was extra,
unforeseen and free.

WE may not have four Sam Maguires, but in Derry we have two Nobel prize winners and a poet who could (in Paddy Heaney’s memorable phrase) “poet the shite out of anyone from Tyrone”.

I have been reading Heaney again over the New Year. You need time for him. Time to let your imagination run. Reading Markings again, it reminded me that nobody really cares about winning medals. But out of a humdrum life, you can sacrifice yourself to a cause bigger than you. You can test your loyalty and courage and the depths of your character. You can thrive or falter. It is a cause. An obsession.

Ronan McNamee making his way across Croke Park to embrace his mother after the final whistle, as if there was no one else left in the world. Something, as the poet puts it, that is “extra, unforeseen and free.” Which is about as good a description you will get of why we spend a third of our lives chasing a leather bag of wind, then the final two thirds watching other boys chasing it.

I felt free when I played football. It was a dream to play for Dungiven, then Derry. I don’t mean a dream in the sense that a newly signed soccer player from Brazil will say “It’s always been my dream to play for Spurs.” I mean, as Heaney understood it to be, something not quite real. Almost a fantasy world. When I played, I expressed something deeper inside me. I felt it, rather than played it. So, when the Derry training became too samey and routined, I left. I was only 29, but the feeling of time that was “extra, unforeseen and free” was gone. I was no longer playing in my head, like effort in an another world.

As the Derry poet put it, as if “some limit had been passed.” Instead, the professionalisation of the game and its vain effort to guarantee winning, commodified and spoiled it. Two years later, Eamonn Coleman came back. He rang me and said “I want you back in the number 13 jersey Jody.” I turned him down. When I played football, I wanted it to be because I was excited by it and felt there were no limits. I didn’t want it to be a job. I already had one of those.

Last month, The Irish Independent did an online survey for Team of the Year. Tyrone got less than one per cent of the vote, only slightly less popular than Covid. If Mayo or Kerry had won the All-Ireland after such a swashbuckling and exciting campaign, they would probably have come out on top (Mayo definitely would have). Likewise, Tyrone came nowhere in RTE’s Team of the Year. Perhaps this tells us something about southern attitudes, highlighted in Pat Spillane’s bizarre, angry rant about the Northern team and the vacuum of information surrounding their Covid issue.

One thing is for sure. Tyrone were the team of the year, meeting every challenge with courage and adventure and a ferocious togetherness. The transformation from the dour, loveless, going-through-the-motions later years of Mickey Harte, into an exhilarating, game playing, risk taking, see what they’re made of philosophy would have pleased the poet.

Every game was a battle. Against Cavan (reigning Ulster champions), Donegal (a see-saw game) and then a mammoth contest with Monaghan. Our hearts were in our mouths that day (remember Rory Beggan getting intercepted as he soloed out, then recovering to save a certain goal?) and Tyrone squeaked home by a single point after Monaghan had looked likely to win it. A hundred unforeseen things happened in Croke Park, but at the end, it was Tyrone who were standing.

Then hot favourites Kerry, a momentous, thunderous, exhausting match where Tyrone shipped two (deserved) black cards but surprised us with their invention. Not to mention their refusal to buckle in the face of one of the greatest individual performances by any forward in any sport. David Clifford must wonder what he has to do to win a Celtic Cross. Like other Kerry greats before him, he is beginning to understand that a good Tyrone team is somehow stronger, more serious and more united than a good Kerry team.

Most fascinating was how they transformed into champions before our eyes that day. By the final whistle in the semi-final, Mayo were already done for. A few weeks later they played with glory and honour, in time that was unforeseen and free.

The Irish rugby team had a great win against New Zealand but it was a friendly, reminding me of Adrian McGuckin’s great line that he was “wary of boys with nice haircuts and fancy jeans that score 1-5 in friendlies”. Limerick hurlers were awesome, but they are so good that in the interests of giving the others a chance I have not even considered them. They remind me of the old days when great heavyweight boxers would tour the country as fairground attractions and offer audience members $5 for going a round with them, knocking the poor critters out one after the other. Tyrone exemplified everything that is good about the game, playing with the joy of youngsters shouting their heads off in a field.

The year ended with the Seamus Heaney GAA club in Moscow launching their new optforlife jerseys. A life changing message and something we should all think about. Heaney would have been delighted, even if he preferred the squat pen to the football boots.