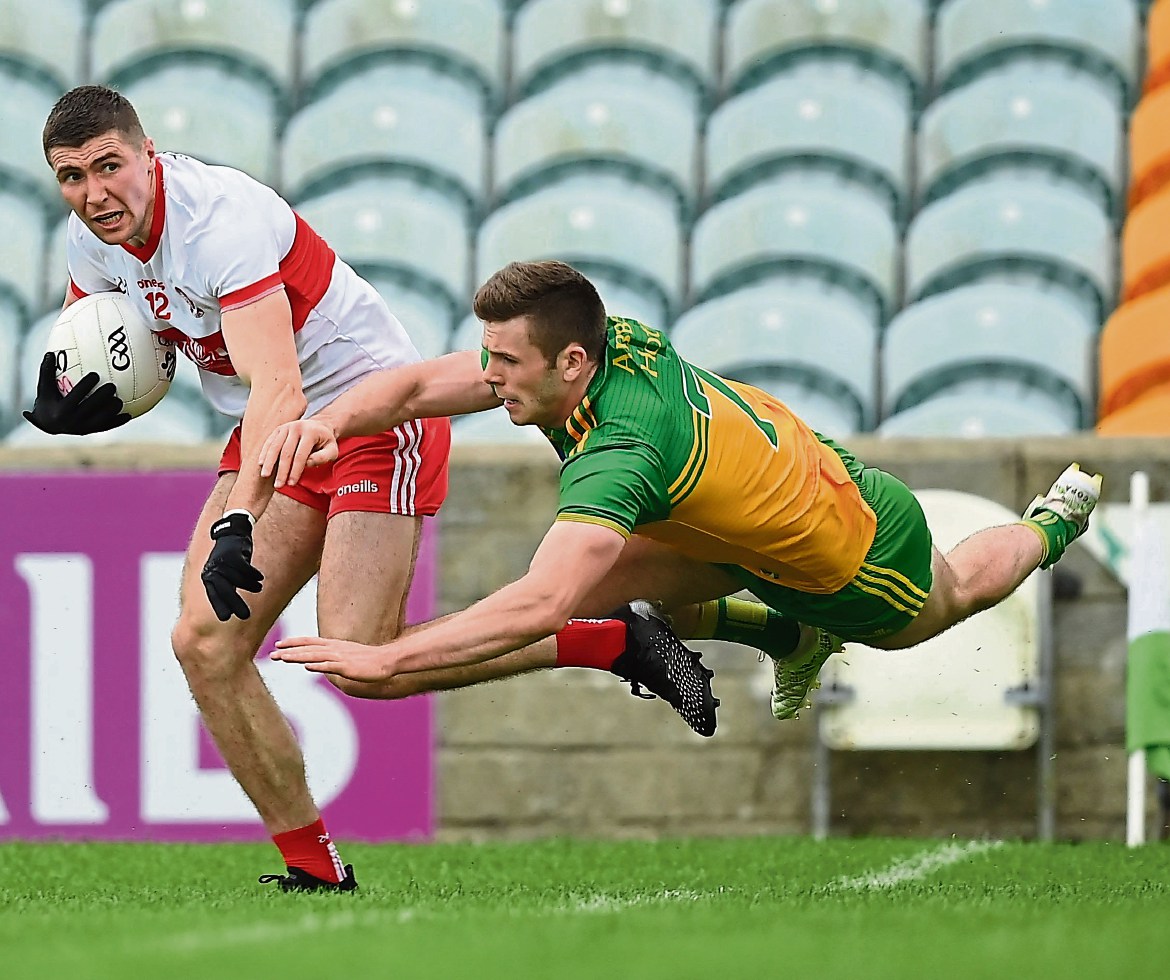 WARRIOR...Ciaran McFaul was exceptional throughout Glen’s run to a historic first ever Derry Senior Championship triumph

I got a phone call on Monday from some of my old Dungiven team mates wanting to know if I was getting the 212 from Belfast to Maghera for the Watty’s celebrations. It was just before noon, and they were already crossing the Glenshane. Later, I rang Fergal “Rooster” McCusker, who sounded as though he had just won Formula One and was on the podium spraying champagne over the camera men. “Court? Wise up Brolly. Tell the judge you’re going drinking with the Wattys.” Car loads of boys from clubs all over the county had already arrived at the club.

It is a mark of a great county that we can put aside vicious club rivalries when an opportunity for Monday drinking arises. They continued into Tuesday. By then, Dungiven men with guitars were leading the crowd in the classics: Take it Down from the Mast, Sean South, Wrap the Green Flag Round Me Boys and all the rest of it. The Monday Club is dodgy enough, but as Mickey Hegarty from Donegal said about The Tuesday club, “only a dog goes drinking on a Tuesday.” To be fair, after a 73 year wait for a first ever senior title, the Wattys have earned the extra day.

They formed the club in 1948, naming it after Walter (Watty) Graham, an elder in the presbyterian church who took part in the 1798 rebellion. He escaped after the United Irishmen were routed by the British (as Heaney put it “shaking scythes at cannon”) but was subsequently betrayed by the Church of Ireland rector in Tamlaght who owed him money. On the 19th of June 1798, Watty was hanged from a tree in the Church of Ireland rectory in Maghera. He was then decapitated, and his head was paraded around the town by the soldiers.

The new club had it all their own way in the area for six years, until Slaughtneil Robert Emmet’s formed in 1954. This caused great consternation in Glen, since up until then, the Wattys had the pick of the surrounding parishes.

A meeting was held between the anxious Glen board and the newly formed Slaughtneil committee. After several hours of wrangling, an agreement on population sharing was reached. The boundary line was to be “the bend above Killylach lough behind Andy McRory’s house”. Since Killylach lough is only the size of about twelve swimming pools, it was felt prudent to include Andy’s house in the agreement. This way, as Jim McGuigan God rest him put it, there could be no doubt about the matter. As Slaughtneil’s agressive policy of expansion annexed parish after parish (Glen’s Mick Lagan famously said, “Putin would be jealous”), an emergency joint meeting of the clubs was called, where an exasperated Mickey McKeefrey said to the Slaughneil contingent, “For fuck’s sake lads, we said Lough Killylach, not Lough Neagh.”

Until last weekend, Glen have been forced to grin and bear it as Slaughtneil became a juggernaut of Gaelic football, hurling, camogie, and Irish culture, annexing Ulster in all three grades and appearing in several senior club All-Ireland finals. In the last decade they have won three All-Ireland senior camogie titles (2017-2019), three Ulster club football titles (2014,2016,2017) and three Ulster senior club hurling titles (2016,2017,2019) in the process becoming the first Derry club ever to win Ulster.

Glen, until the weekend, had been an afterthought. After Sunday, this is changed forever. After watching them winning an incredible four Ulster minor titles in a row from 2011-2014, it has been been a long time coming. “It is only a matter of time” we agreed, “before Glen win a senior championship.” We waited. And waited. And waited. Like all Kerry’s minor titles that haven’t translated into a senior title (what happened the production line?), we started to think they didn’t have the stuff for senior success.

The game is first and foremost about character. A team lives or dies by its culture. Before this year, Glen did not fight hard enough for each other. They had stars. They were too easily disappointed when things went against them on the field. Winning a senior championship is very very difficult. I have three winners’ medals, 1987, 1991 and 1997, and they required nothing short of everything. On Sunday, as I suspected they would be, Glen were finally ready. A team of humble workaholics fighting for a greater cause, when the final whistle went, they looked up at the scoreboard to see they had won.

Conor Glass, like so many other young footballers dazzled by the fool’s gold of Aussie Rules, has come home to where the heart is. In the club on Tuesday, drinking pints in the company of his friends and family and community, he must have wondered why he had ever left. As Rooster said, “Lucky for us he was born on the right side of Lough Neagh.”