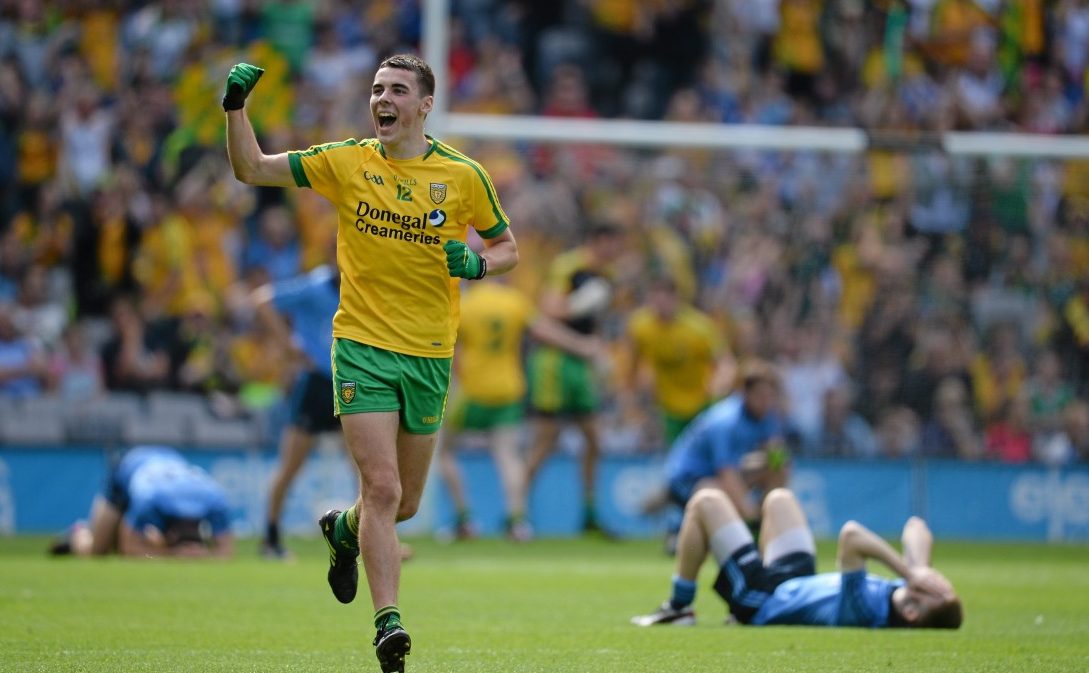 I PREDICTED in my column that Sunday morning that Donegal would beat them. No one else did. It was the ultimate test of Jimmy McGuinness’s mantra that “the best system wins” (or wons as they say in Donegal).

Dublin had been electrifying since Jim Gavin’s arrival, playing the most gorgeous, adventurous football the game had ever seen. Gavin’s philosophy was to express yourself, to play man-to-man, and to attack from everywhere. Jimmy’s was to flood the opposition’s scoring zone, soak them up, then counter-attack with precision, until eventually the opponent is demoralized and beaten. The 2014 All-Ireland semi-final turned out to be the pivotal sporting moment of the decade.

I had been writing during the early part of that 2014 season that Donegal were coming for the Dubs, winding it up a bit and saying that Dublin wouldn’t be real champions until they had beaten Donegal. The Donegal men had taken a year off in 2013 and were refreshed.

I met Bernard Brogan at an awards event earlier in the year and said “Donegal are coming for you.” “Bring it on,” he said, “bring it on.” “You’ll not get a kick,” I said to him. I kept the sparring going in my columns and on TV, raising the temperature.

From the throw-in, there was vast excitement, as Dublin set off at 100 miles an hour, galloping forward in droves against Donegal’s 13-man defence. They were going for the knockout and Donegal were clinging on grimly, getting a hand in at the last minute to prevent a certain goal (Neil McGee as Bernard Brogan looked set to palm in at the far post), four men diving to force a Connolly shot off target, causing us to jump off our seats, shout, gasp, hold our breaths and generally wonder how long Donegal could survive this shellacking.

By the 25th minute it was Dublin 0-9, Donegal 0-4, but something was happening. Thing was, it was mostly long range potshots from Paul Flynn that forged the Dublin lead, and long-range potshots do not win big championship games. Rather, the best system wins.

Any other team would have caved in, but these Donegal players had been utterly convinced by Jimmy’s messianic fervor and the fact that his system had worked so completely in 2012. They could see how the game would shape up if they held their ground. It was in their memory banks, and Jimmy, after all, had foretold it in training and in the changing room beforehand.

When the first goal duly came, that old familiar Hill 16 anxiety swept across the Dublin players like a poltergeist. By half-time the score was 1-8 to 0-10 and I was triumphant. It may have only been a one-point advantage, but it was clear the game was over. In the studio, I said “The nightmare is upon them”. And so it was.

Donegal filleted them. In the 46th minute, another counter-attack ended with Colm McFadden selling two delightful dummies before tipping the ball to the empty net. 3-10 to 0-12 and it was already a rout. It was magnificent entertainment, but it was also to have huge consequences for our beloved game.

Had the Dubs broken through and walloped them, it would have been an enormous, positive endorsement of traditional Gaelic football, would have encouraged coaches to coach skill based football, and would have helped to prevent the zonal defensive epidemic that has helped to ruin the game as a spectacle. But not even the Dubs can defy the laws of physics. As Kevin Cassidy said to me once, “It’s hard to score a goal Joe if there are 15 bodies inside the 14.”

The constant refrain afterwards was. “Jim was naïve. Why did he not play a sweeper?” the Dub’s legendary omerta was breached when word even filtered out afterwards that in the changing room at half-time, Philly McMahon offered to play the sweeper role but Jim would not countenance it. It was against his principles.

In the final a few weeks later, Kerry had no such qualms, ruthlessly setting their principles aside. They went into full-on blanket defensive counter-attack mode, both teams shuffled through the worst final ever seen and Kerry won with a Donaghy goal from a howler of a short kick-out. “What do you think of that Joe Brolly” Kieran Donaghy asked? Shite, was the obvious response.

That immortal game had a number of consequences. Firstly, it convinced many coaches that the zonal defensive system was the strongest possible foundation for a game plan. Secondly, it forced the Dubs to change tack and use a sweeper in front of the full-forward. With the game’s best, most adventurous team deploying a sweeper when the opposing team attacked, this quickly became the standard method for club and county.

It is this sweeper in front of the full-forward that has been so devastating for the beautiful game with the GAA refusing to take any steps to deal with it during the recent rules review, electing instead to turn our game into a hybrid version of Aussie Rules, the sweeper is here to stay.