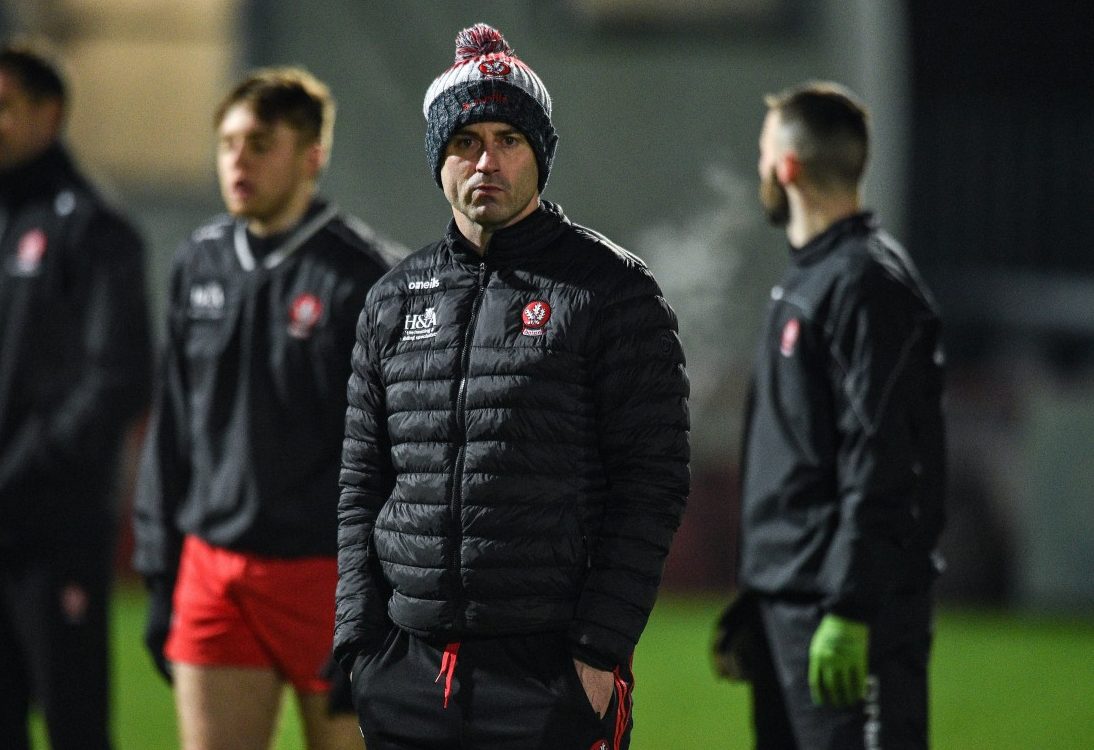 PADDY Heaney wrote yesterday that Rory Gallagher is doing a good job with Derry and spoke of his admiration for Rory’s footballing brain. The GAA community will be glad to know that I have arranged for Paddy to go to the Blackrock clinic for a full psychiatric assessment. It is the least I can do for my old friend.

If we had no manager and the Derry Board had sent texts to the squad on the Wednesday before the game saying “Congratulations, you have been selected to play against Leitrim this Saturday. Please be at the ground by 3.30pm. Bring boots and gloves, gear will be provided” and the boys were left to sort themselves out, we would beat Leitrim by ten points. As it is, we are heading for relegation to Division Four. Paddy’s definition of “doing a good job” is not the same as mine.

Meath are another team that are accelerating backwards into the past, operating a primitive early version of the blanket defensive system that is, like Rory’s system, doomed to failure, since it is grounded in failure.

The point of the game is to try to win, which requires a group that is motivated and stimulated. In turn this can only happen if they have a system which is based on trying to win the game. If the system is about keeping the scores down, based on formula and managerial micromanagement, then playing to win becomes impossible.

Meath, like Derry, are stuck in a dark nightmare, and it is only going to get worse. Against Donegal at the weekend, the county of O’Rourke and Flynn and Stafford and Lyons embarrassed themselves in front of a huge, optimistic home crowd, who sat there glum and silent as the nothingness unfolded in front of them. It was easy for Donegal, who picked them off with their attack minded, adventurous probing, even if the spectacle was horrific. Another 70 minutes I will never get back.

In Mayo, on Saturday night in round two, the fur coat was on again to face another freezing night of outdoors punditry. Andy Moran, who is struggling to adjust to life after Mayo, buying his own groceries, paying for his own petrol, even having to fork out for hotel rooms, joined us on the telly.

Mayo, who refuse to do the going-through-the-motions-blanket-defensive-thing started the game in a hurry, buoyed by their passionate supporters, but hurrying is not the same as winning and by half-time the game was gone from them.

In that first period, when they were dominant, they kicked five very bad wides and put two into the keeper’s hands. This sort of panicky shooting spreads panic and is the opposite of the composure required to succeed at this level.

Their defending had been very good, with Oisin Mullin (who Andy Moran told me is heading for Aussie Rules) and Padraig O’Hora (who I wasn’t surprised to hear is an MMA fighter) dominant in the full back line. Rob Hennelly’s kick outs were flawless in that first half and the midfield contest was even. None of this matters if chances are not taken and when Dublin drew level on the half time whistle at 0-5 to 0-5, we knew what was coming.

Barry Cassidy must have seen something that no one else did when he sent off Jordan Flynn in the 14th minute. The TV replays (five different angles) showed it was a high tackle (yellow) with his open hand brushing against John Small’s face.

John, who could get a job as a stuntman in a boxing movie, slumped to the ground holding his face but even so, the referee’s decision was rash and wrong.

The Tyrone ones will remember John doing exactly the same in the 2018 final, lying down holding his face trying to get Peter Harte sent off. Peter, who is a manly and courageous footballer, was rightly outraged and tried repeatedly to drag Small to his face, who resolutely refused to stand, instead holding his face with both hands to the bitter end. This only highlighted how embarrassing John’s conduct was. Who holds their face in their hands when they get hit in the face?

It was a very disappointing event and it spoiled the rest of the game. Dublin were now able to kick all their kick outs to the spare man and they expertly used the extra time and space they had for the remainder of the game.

The contrast between champions (who are always dead eyed killers) and Mayo was ruthlessly demonstrated by the Dubs in the third quarter. When Mayo had been on top in the first quarter they squandered their chances. When Dublin were on top in the third quarter they kicked 1-3 to Mayo’s 0-0, with no wides. They dismantled Rob Hennelly’s kick outs and by the 50th minute the score was 1-8 to 0-5 and it was only a matter of how much. In the 53rd minute, Hennelly rose to catch a straightforward high ball on his line, then had one of his malfunctions, dropping it on the line and almost scoring an own goal. He has the physical gifts but not the mental strength required to keel goal at this level and it is a mystery how he can be selected ahead of David Clarke.

Mayo managed only three points in the second half, two of those from close in frees. They were amateurish and panicky, for the second week in a row. Last week, they managed an outrageous draw with Donegal courtesy of a fluked goal in the first half and a deflected goal with the last kick of the game.

This week, Dublin beat them easily, very easily, the second half scoreline of 1-6 to 0-3 coming with the Dubs going through the motions. They had some beautiful moments. That 1-3 after half time was of the highest order, great scores coming from blindingly quick, intricate team moves. Dean Rock’s flicked goal was like a magical drop shot by Federer at the net but the high point was Brian Howard’s stunning catch against Aidan O’Shea.

Mayo lost, but because they play football and always play to win, their games are always interesting and enjoyable.

Dessie Farrell (Jim Gavin obviously bequeathed him his playbook of after-match clichés) said afterwards that “any day you come to Mayo and get two points is a good day” which is a bit rich given that it is eight years since Mayo last beat Dublin and they have not beaten the Dubs in their last sixteen games in league and championship. Dessie’s condescending remark reminded me of Vitas Gerailitis’ great line after he beat Jimmy Connors in the semi-final of the US Masters. Connors, then world number one, had beaten him in their previous sixteen meetings. At the press conference afterwards, Vitas said “Nobody, and I mean nobody, beats Vitas Guerilitis seventeen times in a row.