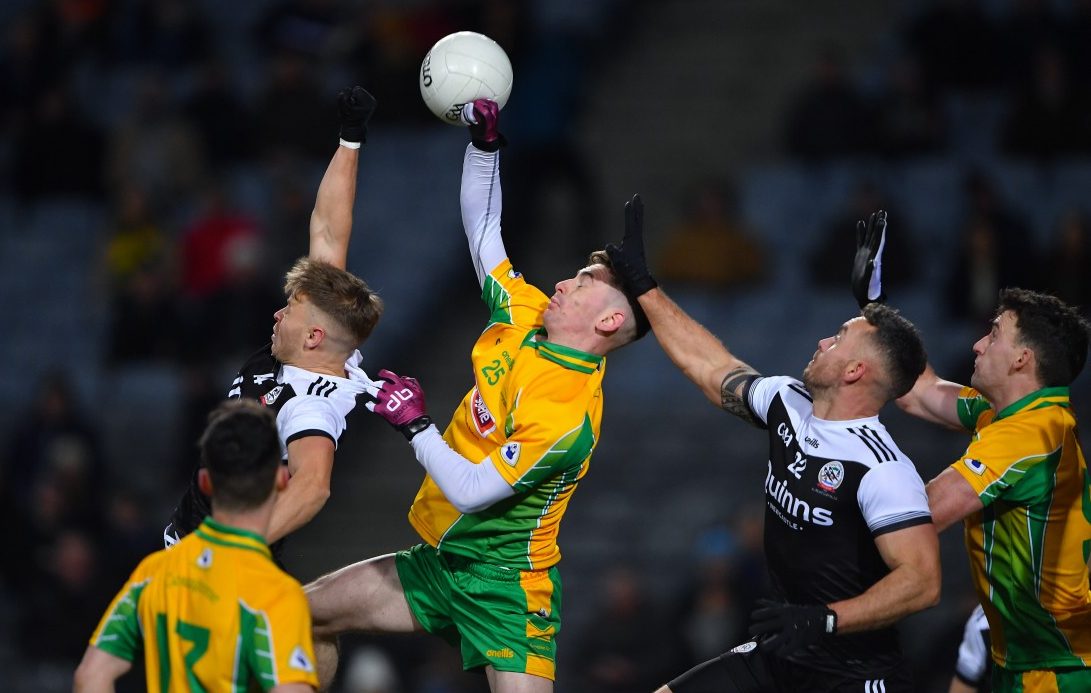 I WAS in Teconnaught club in the shadow of the Mournes on Saturday to open their state of the art pavilion. The new club hall was packed when I arrived and I found myself standing at the back with an elderly club member.

Looking towards the front row I spotted a chain of office around one person’s neck and what looked like politicians. You can always tell a politician since they always look depressed. I said to the old fellow “Are there any politicians from the other tradition I need to mention in my speech?” “Aye Joe,” he said, “there are a couple of ones from the SDLP here.”

Afterwards, Conor Laverty’s sister came over to me and said “Will we beat Corofin tomorrow?” “No comment” I said. Playing against Corofin is like playing against invisible opponents. You might not be doing very much wrong but you have no chance of winning. So it was with Kilcoo.

At the end of normal time, with the teams tied at 0-7 apiece, there was a Pamplona bull run on the way down the tunnel into the changing rooms, with a spectator vaulting 20 feet into the melee from the stand above, like the lead singer in a heavy metal band launching himself into the crowd.

This turned out to be the high point of Kilcoo’s day. Corofin gathered themselves during the break, and when the whistle went to start the extra-time, they went into invisible mode. Suddenly the ball was wafting over the bar and into the net and in no time at all the game was over. In that first period of extra time, they blasted in 1-4, which was as much as they had managed in the previous 70 minutes, and the three in-a-row was secured.

From the throw-in almost two hours earlier (and boy did we feel every dull second of that two hours) we wondered if Kilcoo would employ any new tactics or strategy to deal with the completely novel problems that Corofin bring.

Mickey Moran – since his spell with Slaughtneil – is sometimes described as a great manager, but this has not been my experience. Tactics and strategy are not his bag. Rather, he is a popular presence on the training field and is good on skills work.

Since he went to Kilcoo, they have continued to play precisely the way they used to, a heavy screen defence coupled with hard running and counter-attacking, which has worked very well in Down and in an increasingly attritional Ulster Club scene.

This was never going to work against Corofin, but in the absence of innovative thinking from the coach, it was their only option, with the amazing Conor Laverty leading the team, on and off the field of play.

So, from the start, Kilcoo went into their defensive zone, all 14 outfielders inside their own half when they lost possession, and hoped that Corofin would misfire.

Meanwhile, Corofin instantly began to probe. After one minute and 45 seconds, a bewildering, mesmerizing move put Lundy through on goal, with Sice waiting at the far post to palm the ball to the empty net. In the first sign of Corofin anxiety (which became the theme of ordinary time), Lundy did not however hand-pass it to Sice for the easy goal, instead panicking and shooting into the grateful block of the Kilcoo full-back.

Corofin created another, even better goal chance in the 26th minute. This time, Martin Farragher botched what would normally have been a simple finish for him. Either of those goals would have killed the game, as it would have launched Corofin into their normal flight path and forced Kilcoo to come out and play.

As it was, Kilcoo’s 14-man defensive zone held firm. By half time, it was 0-3 to 0-2 for the Down men and the big crowd would have been asleep had it not been so cold.

Kilcoo’s problems were that they had no attack plan other than to try somehow to work a score on the counter or win a free, and that their keeper could not get the ball kicked out to a Kilcoo man.

Kick-out strategy is the foundation stone of the modern game. It is the responsibility of the manager. If the correct work is done repetitively on the training field, then a team will win its own kick-outs, usually at around a rate of 70 percent plus.

Kilcoo’s kick-outs were predictable and Corofin demolished them. There was no variation. They were mainly kicked out long to the right half-forward position. This managerial malfunction – on a day when Corofin were far below their best – was the main reason Kilcoo lost.

At 0-4 apiece (33 minutes), their keeper had to start kicking the ball out and Corofin were in business. Three turnovers in a row put them 0-7 to 0-4 ahead, Kilcoo unable to get their defensive zone in place quickly enough from their own lost kick-outs.

Then, Corofin relapsed into anxiety, clearly put off their game by the thought of the first ever three in-a-row. They played incompetently for the remainder of the second half, eventually settling for an immensely cynical ‘don’t lose’ brand of football that did nothing for their reputation but that is permitted by the discredited playing rules of the GAA.

This cynicism succeeded only in emboldening a Kilcoo team that were otherwise out of their depth and surviving on a very primitive, entirely unimaginative defensive system. The sort of system we have seen Corofin picking apart with glee on countless occasions. With the clock ticking down, Kilcoo were thriving on Corofin’s fear and they deservedly forced the equalizer, Paul Devlin kicking a nerveless free after the thoroughly incompetent Conor Lane had brought the free forward a full 25 metres. Only in the GAA.

That first 70 minutes was the sort of travesty that is becoming the norm, where heavy defensive zones and the odd counter attack has taken the place of a once great game. The committee appointed by the GAA were out of their depth at the recent rules review (as they have been when it comes to the black card) and instead of dealing with the root cause of the problem (ie sweepers blocking the scoring area in front of the posts) instead chose to bring in a mark that alters the character of the game, makes us look like Aussie Rules, and does nothing whatsoever to deal with the root problem.

Kilcoo deserved to force the draw, but it merely delayed the inevitable. When the excellent Ronan Steed blasted another terrific long-range score in the first minute of extra time to put Corofin 0-8 to 0-7 up, the Kilcoo keeper had to start kicking the ball out again, and this time it was curtains.

Four Kilcoo kick-outs in a row were intercepted and this time, Corofin did not botch the opportunities, moving in a blink to 1-11 to 0-8. In this spell they were magical, shrugging off the previous 70 minutes of laborious and frankly embarrassing play, and reminding us suddenly of what they truly are.

For the remainder of the game, Kilcoo were playing against invisible men. To clarify, I mean invisible, not invincible, which reminds me of a story about Frank Bruno, the famous British heavyweight boxer. Before he fought Mike Tyson for the world title, he was interviewed by Harry Carpenter.

Harry: There are many people who think Mike Tyson is invincible.

Frank: Well I hope he isn’t Harry. If I can’t see him how will I hit him?

The only interesting thing that happened after that 1-4 blitz was when Ciaran Fitzgerald almost fis- passed the ball into his own net, Bernard Power having to launch himself backwards through the air to swipe the ball clear as it was about to cross the line.

Kilcoo didn’t score at all in extra time, leaving the final score 1-12 to 0-7. Corofin won this game by eight points having played for only 20 minutes. Strong, passionate, defensive, boring teams like Kilcoo come and go. Corofin are a team for the ages. Hopefully, they will continue bucking the trend. At least we will have something to watch while the GAA lets the game slide into the toilet.