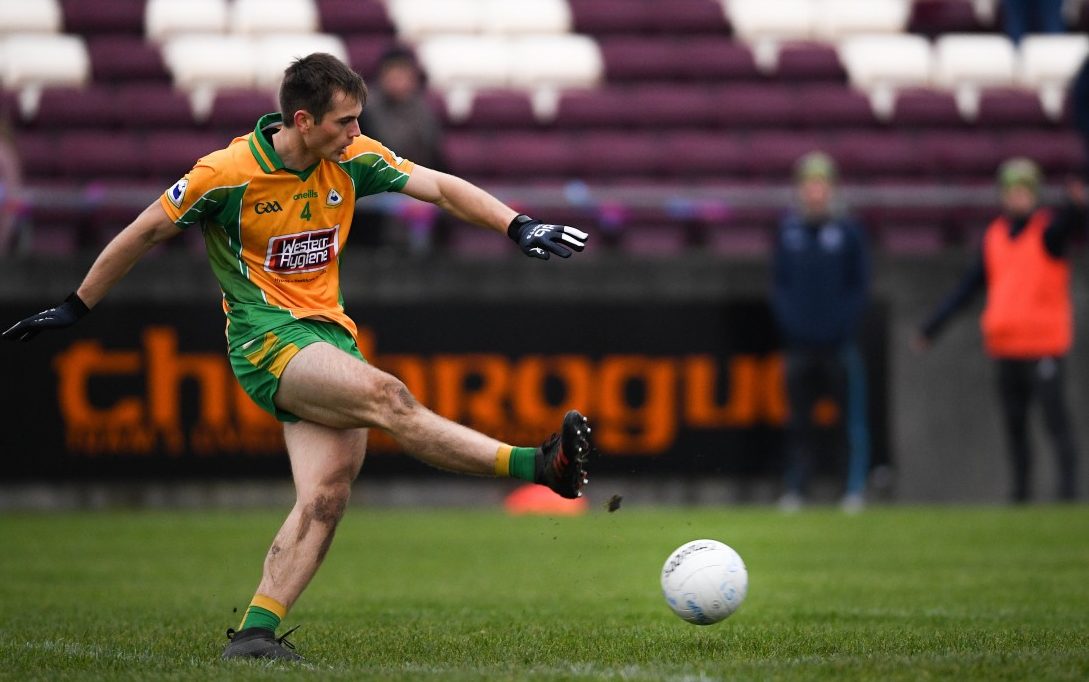 WATCHING Corofin’s opponents reminds me of Eric Cantona’s line about the current Manchester United team. “Watching United play now, it’s a bit like an old man making love. He tries as hard as he can, but at the end of the day, everyone is a bit disappointed.”

You can point to any number of extraordinary things they have done on a football field, but I am drawn to something they did in this year’s Connacht semi-final against Ballintubber. Ballintubber, fed up playing the white men to Corofin’s Globetrotters, went full-on blanket defensive against them that day, pulling
everyone back and staging a ferocious defensive effort starting on their defensive ‘45’.

For the entire first half, Corofin probed and teased and tried all sorts, but couldn’t get through for the goal they knew would end the game. For all Corofin’s bewildering interchanging, flicks, perfect kickpassing and timed runs, Ballintubber were proving extremely difficult to shift. At the half time whistle, Corofin were up by a single point, 0-5 to 0-4.

While Ballintubber jogged to their changing room with grim intent, and great roars of approval from their support, Gary Sice beckoned his teammates to the centre of the field. For the next two minutes they stood there chatting. As Sice pointed towards what was going to be Ballintubber’s defensive area in the second half, they nodded inagreement.

A plan had been made. Then, they turned and walked off the pitch. Something was up. Something was very obviously up and I wasn’t going to take my
eyes off the screen.

In the 32nd minute, Liam Silke, their number 4, soloed towards the right halfforward position. Michael Lundy, their number 15, had run diagonally across the
field to meet him. Lundy looped around him, Silke turned and hand-passed the ball to him. Now, Lundy began soloing across the ‘45’ towards the left halfforward area, weaving and committing the first line of defenders.

Then, something extraordinary happened. As Lundy worked his way across the field to the left half-forward spot, the entire Corofin forward line ran towards the exact same spot, dragging their men and sweepers with them. One quick hand-pass, then the ball was laid back to Farragher who was standing waiting at left half-forward.

The second he got the ball, he kicked a 30- metre pass over the top to Liam Silke, the number 4, who had waited until the blanket had been pulled away then snuck inside.

Silke took possession in 10 yards of space and calmly slotted the ball to the net. 1-5 to 0-4.

One would not have been surprised had Sice taken out a cigar, lit it, had a puff, and said “ I love it when a plan comes together.”

I sat there stunned at the sheer genius of it. My first thought? “Is there a drill I can create so my minors can do that?” There isn’t of course.

Rather, this is the accumulation of 30 years of creative thought, starting with the Corofin skills nursery, where each player is expected to be two-footed by the age of 14. Everything they do is more or less planned, but the gloss is provided by their outstanding skill set.

It is often said that the great players have more time. This is of course nonsense, since no human can defy the laws of physics. The reason Peter Canavan or Maurice Fitz or Diarmuid Connolly create this impression is because when they get the ball, because they are two-footed, they look up and scan left and right.

In turn, this causes the defender to hesitate, since he knows they can go either way.

Which explains why Corofin players appear to have more time. Their performance on Saturday quickly reduced the fertile young stallions of the Nemo warm-up to pensioners settling for a platonic relationship.

Eleven seconds it took for them to kill the game.

In that 11th second, they were awarded a sideline kick at the right half-back position.

One of their great tricks is for the half-forwards and half-backs to switch. As soon as the sideline was awarded, their right half-forward ran towards the right half-back area and past the kicker, dragging the wing-back way out of position. Kieran Molloy sprinted into the gap and Daithi Burke immediately kicked the ball over the top to him. Molloy won it, laid it off to Sice who was now in quarter back mode in the number 11 area.

The second part of the plan now commenced. The two man full-forward line of Lundy and Farragher sprinted beside each other towards the sideline at the right corner-forward area dragging the full-back and remaining corner-back with them, leaving the space in front of goals wide open. Sice fired a kick pass to Farragher, and as he did so, Lundy was already doubling back and sprinting towards goal.

Farragher, knowing he was doing this, took possession and immediately turned and kick passed the ball to him. Lundy was now through on goal. He rounded the ’keeper and put the ball in the empty net. Thirty five seconds gone. 1-0 to 0-0.

Corofin’s superb positioning and awareness on Nemo’s kick-outs quickly destroyed what was left of their morale. From the kick-out to the wing, the corner-forward turns and sprints towards the kick. The half-forward drops to attack the high ball.

One of the Corofin players automatically drops behind as two contest the ball. All the time, it is their awareness of where the ball is and where their team mates are that make this work.

Nemo were hemmed in as a result and by the second quarter they were 1-4 to 0-0 behind and the Nemo ’keeper, Michael Martin’s son, was considering a career in politics, which may be demoralising, but not as demoralising as this.

Corofin’s defensive work – as has been illustrated by James Robinson (@dontfoul) – is also the best in the country. Again, their positioning and awareness is key, something that has been worked on exhaustively.

Watch Nemo’s first four attacks. For the first, they are trying to work the ball down the left hand side. The Corofin defenders track their men carefully, keeping them on the sideline, waiting three to four metres inside them at the scoring line.

When the Nemo left corner-forward gets the ball, the Corofin defender does not let him onto his right foot. Eventually, he tries to solo past and at that point, the Corofin sweeper (this time it is Sice) blocks him off and turns him back. As Nemo try to work the ball across the middle, Corofin condense and block the middle, tackling ferociously.

Eventually a panicked hand-pass is intercepted and Corofin are on the attack.

In the 29th minute, Michael Lundy (number 15) dropped back and took a hand-pass from the ’keeper, Bernard Power. When Bernard steps up, I imagine the announcer at the World Darts Championship saying “Best of order ladies and gentlemen, Bernard to throw first.” He may not be a disciple of S&C, but what a footballer he is.

At one point in the second half, he gave an inch-perfect crossfield kickpass to Kieran Fitzgerald that no goalie would ever try, sending the ball sailing across his own ‘14’, narrowly out of the grasp of the Nemo full-forward.

Anyway, when Lundy took the hand-pass, he immediately looked up and gave a perfect 40-metre kick pass to Ian Burke, bouncing it gently into his chest as he
sprinted on to it.

Burke immediately turned inside onto his left and swept another 40-metre kick pass diagonally crossfield to Martin Farragher who was sprinting out to the left corner- forward position.

Farragher gathered, turned and kicked a 40-yard pass to Kieran Molloy who was thundering through the middle into space. Molloy gathered and hand-passed over the bar.

He must not have seen Liam Silke (number 4) who had got himself to the far post to palm the ball to the empty net. Tut tut tut. Three kick passes the length of the field.

No solo or bounce. Perfect movement on and off the ball.

This is football we have not seen before, football reducing apparently virile opponents to sudden infertility.

I can only suggest that Kilcoo add Viagra to the water bottles.