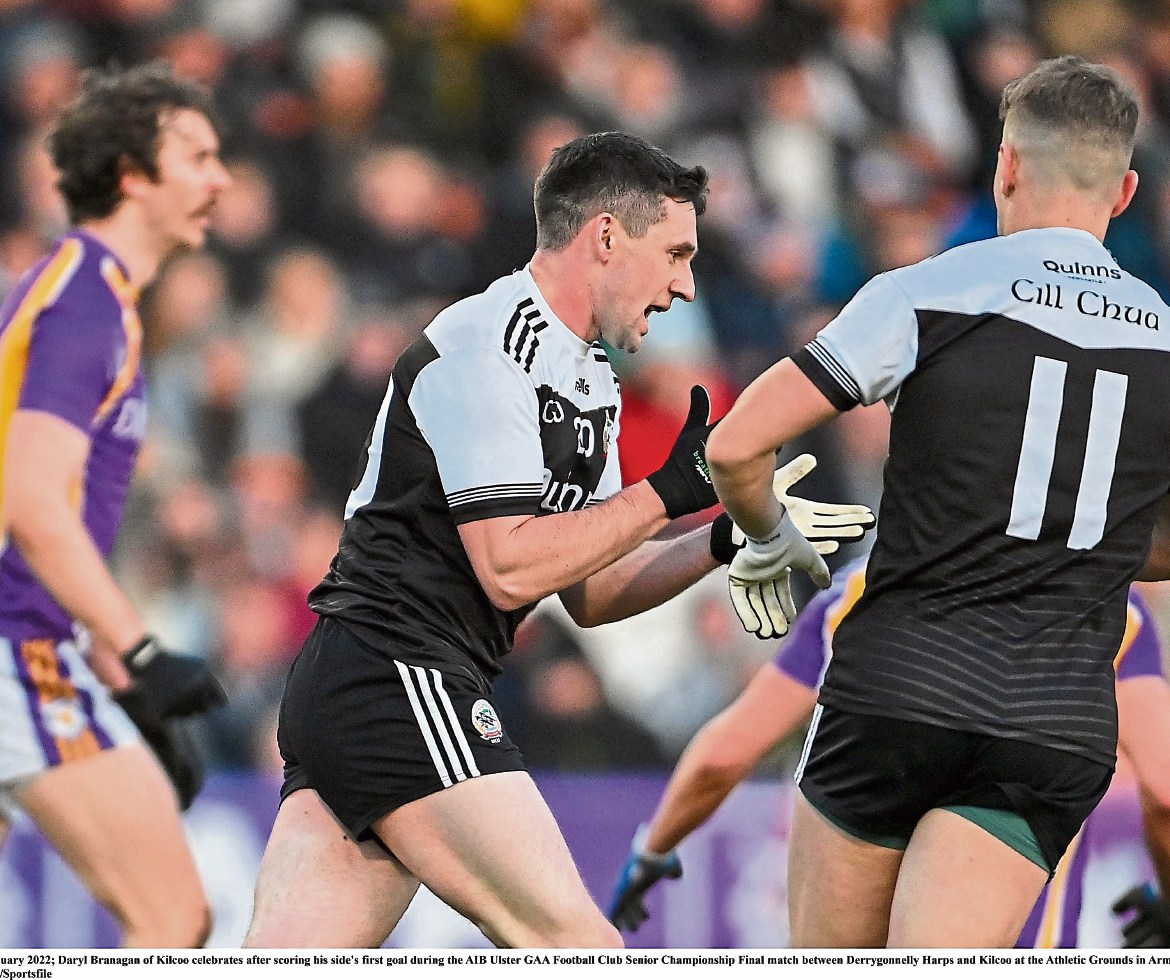 A SERIOUS TEAM...Daryl Branagan of Kilcoo celebrates after scoring his side's first goal against Derrygonnelly

CONGRATULATIONS to Kilcoo, your 2022 All-Ireland Club champions. At the final whistle against Derrygonnelly on Sunday, the Kilcoo players bore the expressions of plasterers who were stopping for the tea halfway through a long job. In his speech from the podium, joint captain Conor Laverty bore the pained expression of the Mother Superior in the middle of a particularly heavy period. He absentmindedly held the trophy, thanked the sponsors, and said, “See you all in two weeks.”

On TG4, Eugene Branagan was awarded Man of the Match. He said, “From the start of the year, our aim is to win the All-Ireland.” Eugene wears black tights at the games, hail or shine. Interestingly, Conor Laverty told me this is because he is a part time leg model and can’t allow his skin tone to be changed by the elements. His Man of the Match award will likely be used to drive cattle on the family farm.

Kilcoo’s reaction to a provincial final win tells us they are a serious team. Put another way, like all serious teams, they are uninterested in short-term reward. When Mayo beat Dublin in their epic All-Ireland semi-final in August last year, it was celebrated like the wedding of a Disney princess.

The players talked about what great men they were and gave emotionally charged interviews. RTE put on a full sentimental production the following night that would have put the BBC’s coverage of a royal wedding to shame. All heroic music and slow-mo shots of Mayo scores and celebrating Mayo players.

The only thing missing was the players dancing up and down together singing “We are the champions” and spraying champagne over one and other. Tyrone on the other hand, after a much more convincing (no freak events) win over Kerry, headed back home to prepare for the final and RTE concentrated on how on earth Kerry had lost. Which is why I predicted with great certainty that Tyrone would be champions.

Aidan Branagan was asked once about Kilcoo’s next opponents. He said, “I’m not really a football mad man. I’d watch a bit, but I wouldn’t know the ins and outs of it. With a farm to run and kids, I haven’t much time for football outside of playing it and a bit of underage coaching.”

This is the essence of the matter. The only thing that is important is Kilcoo and its well being. The outside world is neither here nor there. I have been up to watch Kilcoo training twice over the last three years. The training is tough. Very tough. Hard, repetitive work is the norm, with no shirking. Hard tackling in numbers, careful defensive positioning, lung-bursting counter-attacking runs the length of the field. Conor Laverty is the driving force.

The centre of the Kilcoo community (1,000 inhabitants) is the club. In the middle of the mountain, they have a simple clubhouse, state of the art pitches, a beautiful walkway for the people and a playpark for the kids. Savouring the atmosphere up there, the playpark and pitches full of kids, the elderly folk strolling, and looking down on the training pitch at the seniors driving themselves on, it feels like the seniors are the worker bees, protecting the community from all comers and meeting every challenge. Pride of place is the building block here.

Their style of play is horrific to play against and spoils the spectacle, but is germanic in its efficiency. Defensively, it resembles Jimmy McGuinness’ 2011 Donegal, with an almost impenetrable shell set up inside the halfway line and corner-forward Conor Laverty conducting them from the edge of the D.

Over the last decade, they have perfected this and stuck at it. No fouling in the scoring zone. Hard man-to-man marking from the front for the primary defenders. Expert positioning of the sweepers to anticipate every line of attack. It destroys the opposition’s normal attacking flow, but more importantly has a seriously demoralising impact on them.

In the semi-final against a much more talented Glen team, the impact of this constant psychological pressure was demonstrated. Glen were completely knocked out of their normal flow. Every inch was war. They survived to extra time. Then, went one point ahead for the first time in the game. Then, come the championship round, the ‘keeper dithered on a short kick-out, had a brain freeze, and miscued it. Kilcoo pounced, ruthlessly returned the error for a goal and the game was over.

This psychological pressure is their hallmark. Their defensive system thwarts the opponents’ normal expectations. The laws of physics after all, are immutable. Often, they reach half time and the score is 0-3 to 0-2, or 0-4 to 0-2. This does not bother them in the slightest, but they have already gotten under the opponents’ skin and they are thinking “What can we do? What can we do? Jesus we need to do something”.

Derrygonnelly scored only two points in the first half on Sunday. At 0-4 to 0-2 approaching half time, the game was already over. But then, Kilcoo scored one of the greatest team goals ever seen, reminiscent of Corofin’s spectacular against Nemo in the 2018 final. The goal demonstrated the other side to Kilcoo’s system: The fact that they do not defend in numbers simply for the sake of defending. Instead, it is harnessed to a lightning quick, hard running, adventurous attacking plan. Their team work up front, selflessness, awareness, composure in tiny spaces brought them three superb goals. Scary really.

I watched the Munster final and while it was exciting, the Cork city giant St Finbarr’s are not in the same space as Kilcoo. They are a solo running, hand-passing, happy go lucky sort of team that work hard but have all the flaws of Cork’s senior footballers.

They are not ready for Kilcoo’s ruthlessly disciplined and executed game-plan, nor are they ready for the intense concentration and composure of the men from this tiny community. But for Corofin, the most extraordinary club team we have ever seen, Kilcoo would already have an All-Ireland. This year, they will achieve their aim. Then and only then will Conor Laverty permit himself a smile. Maybe.