Caolán McCrossan was born on the 4th of June 2001 in Derry city. He died last year, after only 13 years. 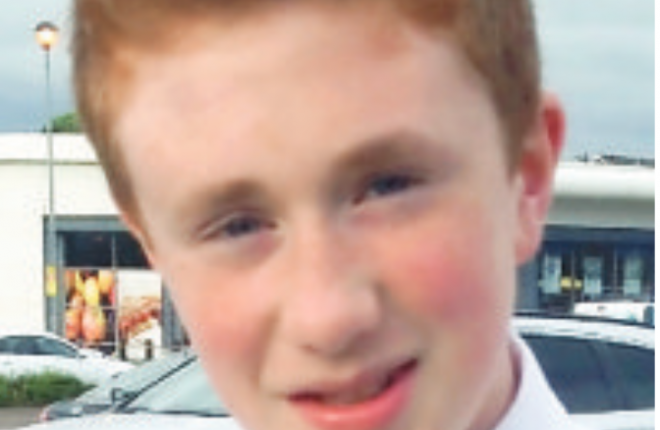 A DAY TO REMEMBER…Caolán’s presence was felt by all

Caolán McCrossan was born on the 4th of June 2001 in Derry city. He died last year, after only 13 years. His family rang me before he died and said the boy would like to see me. So I visited regularly, spending time with him in the few weeks before he died.

One evening, I brought him one of my Derry number 13 jerseys. The last one I had. I searched the cupboards, wading through the jerseys of vanquished number fours from Dublin, Mayo, Down, Donegal and Tyrone and was delighted when I finally found it. He smiled when he saw it. “Help me to put it on da” he whispered. Wincing with pain, he raised himself up, wriggled into it, then lay back on his bed exhausted. He reached out his hand to me and I held it. “Is there anything I can do for you kiddo?” I said. He beckoned me closer. I leaned right in and he whispered through clenched teeth. “Could I see your All-Ireland medal?”

I got it off my mother, who keeps it in the bank in Dungiven. A reasonable precaution you may feel, unlike in Kerry where the girlfriends of All-Ireland winners wear them on their gold chains. When I went up to the Royal with it, Caolán was still wearing the Derry jersey. “ He won’t take it off” said Kim, his heartbroken ma. I handed him the medal in its box. He opened it and I swear, whatever way the light hit it, it glowed. I will not forget that hour, where he sat with that medal, clutching it to his chest, as though it might cure his cancer and bring him long life.

Doire Colmcille have never won anything. Many of you will never even have heard of them. But like clubs all over Ireland, they are the hub of the community. On Saturday morning, in beautiful sunshine, u-14 teams from all over the North arrived at the magnificent new Pairc Colmchille for the inaugural Caolán McCrossan Sevens.

It was so hot at the top of the hill that Caolán’s da, in a wide brimmed sun hat, was going around with a hand held fertiliser sprayer, spraying cool water on the boys between matches. All day long, doing the rounds, refilling the tank, then round again.

I told the St Brigid’s lads why they were there. Caolán’s brother Eoin stood with them and chatted. Then his father Sean and mother Kim. What a day it was! Pure enjoyment and something more. We played thrillingly and made it through to the semi-final where we played Newtownstewart from Tyrone. After some fist fights, some brilliant football and 20 minutes where the 14 players on the field poured their lives into it, St Brigid’s were ahead, though the scoreline scarcely mattered. What a game of football!

Afterwards, everyone shook hands and made up. The final of the cup was another classic. “I hope your boys aren’t going to rough up our lads” said a woman to me before the throw in. “I can’t make any promises” I said.

As the cup final was being played, so the shield and plate finals were going ahead. The sidelines were packed around each pitch. The spectators shouted and applauded. The boys gave it everything. And when the McCrossan family gave out the trophies afterwards, no one cared one damn whether they were getting a cup or a shield or a plate.

“You’ll have to volunteer to be pelted with wet sponges Joe” Eoin said to me. “You’re the champions so you’ve no choice.” So, I stood there with my head through a hole in a board as a hundred kids pelted me. I didn’t mind that so much. It was the glee with which the adults joined in. And I forgot to take my glasses off. As I was leaving, Kim McCrossan hugged me and gave me a beautiful memorial card for Caolán. I will treasure it. It is hard to explain, but he is somewhere inside me.

Tournaments like this show us everything that the GAA can and should be. The principle of competition according to ability is built in. This is nothing more than a reflection of reality. Not one of the adults or kids there would think “ Oh, we’re too good to play in the shield.” In fact, if there was no shield and plate, we’d be saying “ What the hell is going on here?” Yet Leitrim and Longford are lumped in with the Dubs and Tyrone for the senior championship and we say “Oh, we could never change this.”

Our lads are training and playing matches three times a week. None of the coaches are outsiders. No one suggest that they should be paid. So at the sevens on Saturday you could see and feel the vast pride and loyalty the coaches had for their boys and vice versa. Human beings naturally play to win. But we also know when something is badly wrong. So, in spite of the fact that two of our games were hot and heavy, there wasn’t a single dive or drag down. Everyone went flat out, expressed themselves, showed adventure and it was just brilliant.

Man to man contests all over the field showed us the best of the lads and the best of the great game that we play. Yet 24 hours later, we had the travesty of Down v Monaghan. One team playing crap football that was highly inefficient. The other playing crap football that was highly efficient. Not a single man to man contest. Just boring boring defensive counter attacking muck. It used to be one of the great treats of the year, being in Munster with RTE to watch a great hurling contest. But uber professionalism is doing for the hurling as well.

So, Clare v Waterford was puke hurling. Full time sweepers. Forwards left to forage on scraps. Goals impossible ( the one goal scored was a freak caused by the goalie and three defenders getting on top of each other and allowing Maurice Shanahan to poke the goal home), forwards outnumbered. Short pucks to the corner back. Handpassing up and down the field. Two sets of brilliant hurlers reduced to playing crap, highly efficient hurling.

I walked across the pitch beforehand where the Clare men were warming up, drilling the ball at each other with bewildering speed and accuracy. One sliothar went loose and I grabbed it. “Here Joe” said the Clare hurler behind the mask. “No” I said, “Finders keepers.” “Ah for f*** sake” he said. I went to the VIP area where I spied Brian Cody. He signed the ball for my son Rory. “ You’re dead right in what you’re saying Joe” he said. “ Its madness. In Kilkenny, our lads play all their club games. We’re only borrowing them. It’s the whole point of the GAA. Club and community first. It’s what drives us on. Keeps us rooted and fresh.”

He told me that Kilkenny don’t do training weekends or warm weather camps. They don’t even stay overnight in Dublin before the biggest games. John Fogarty went to interview Cody once before an All-Ireland. The training was well over and the boys had all gone. There was still no sign of Cody emerging. So the journalist went to the door of the changing room to see the great man mopping it out. Cody doesn’t take a penny from the GAA. Like Jim Gavin.

I was sitting beside Jarlath Burns in the VIP section. I turned to him and said “ You know, GAA grounds are the only VIP section you’ll ever be in where there are no VIPs. Just ordinary GAA folk. There’s still hope for us Jarlath.”

As I drove away from Derry city on Saturday night, with a carload of delighted, exhausted boys, I had a vivid memory of Caolán’s mother Kim holding a cup of water tenderly to her dying son’s parched lips. On one of my visits, she had gone to Harry Corry’s. She came back bearing furry blankets to swaddle her dying son. His big frame, all 6′ 1” of it, was frail now and his body was painful to the touch. Kim wrapped his pillows and his mattress and his body, soothing him. I wept in the car park afterwards. Even thinking of it now causes my breath to catch.
We have already been invited back to the second Caolán McCrossan Memorial u14 tournament, to be played next summer at Pairc Colmchille. I look forward to it. It is impossible not to be there and feel the presence of the flame haired boy, dashing upfield to take the winning score.