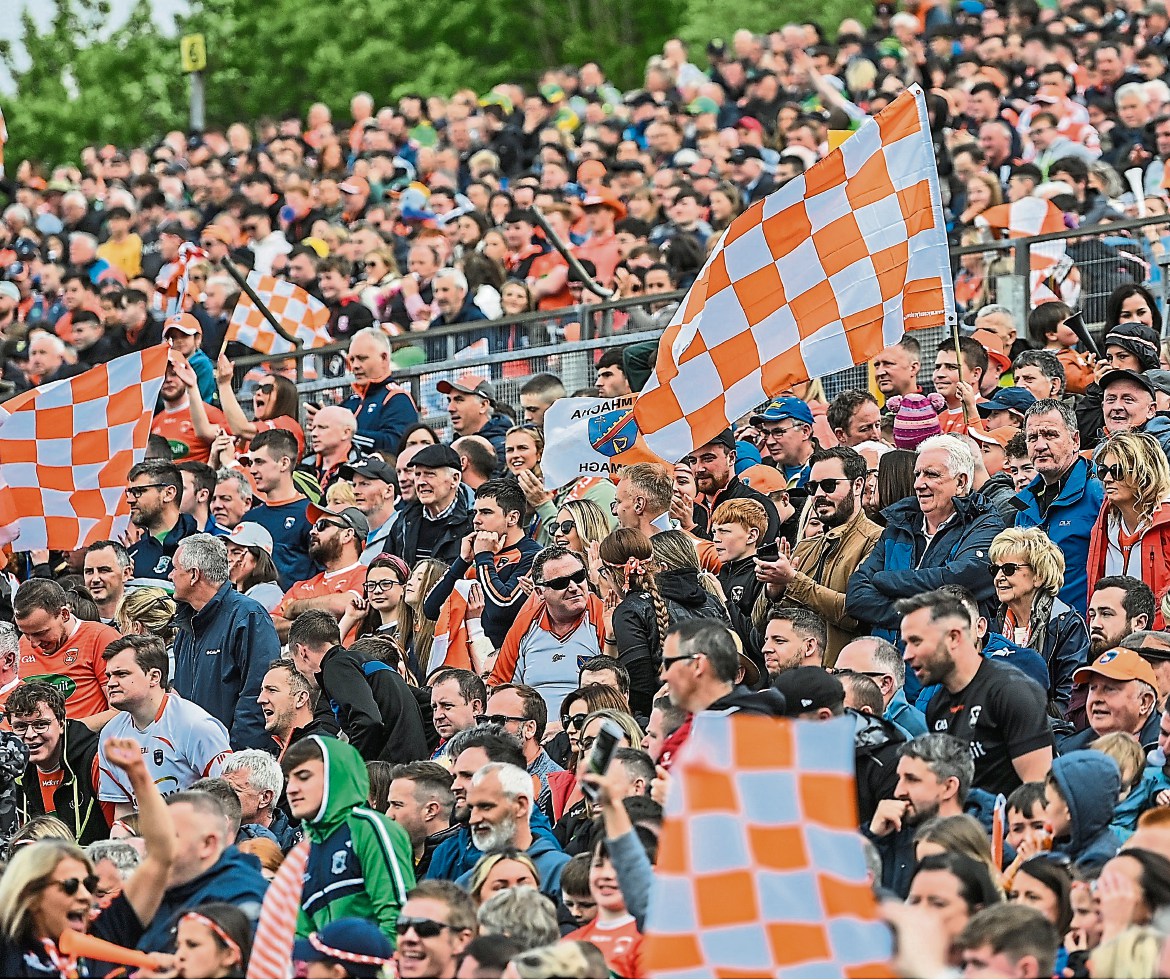 OUT IN NUMBERS...Huge crowds from Derry and Armagh are set to travel to Croke Park this weekend

LIVERPOOL til I die Mo Salah has been in the news for the past month. He is earning a mere £10.4 million a year. Mo loves the people of Liverpool so much he is prepared to stay on for a mere £20.8 million a year. Liverpool are offering £14.3 million, which is heartbreaking for Mo. So heartbreaking that he is going to leave next year on a free transfer. When he is unveiled at the Man City or Barcelona press conference as their new striker, he will beam with pride and tell the world it has always been his boyhood dream to play for (insert name of new team). Professional sport is not personal. It is merely business.

Meanwhile, in Derry and Armagh, and all over Ireland it is intensely personal. There is huge excitement about the upcoming All-Ireland series. We can’t talk or think about anything else. Our young people are queuing for autographs and making flags and posters. Our players are mixing gladly with their people. These are true bonds of loyalty and togetherness. None of the players have to say it was their boyhood dream to play for their county in Croke Park. We know it was.

They will go back to their jobs on Monday morning come what may, teaching our young people, working as doctors and builders and plumbers. And a week later they will turn out for their clubs again and in due course they will take teams and mark out pitches and become chairmen and secretaries and umpires. They will be real role models.

For Derry and Armagh, this is a time to savour. The last eight of the All-Ireland series has been for Dublin, Kerry, Tyrone and Mayo. Not for us. Armagh’s last Ulster title was in 2008. Before this year, ours was 1998, courtesy of a beautifully taken last-minute goal.

Being out of the reckoning for so long deprives us of the self respect and brotherhood that the GAA is there to ensure. For far too long, the big days have been reserved for the big counties. The obvious delight of the people of the counties of the Tailteann Cup semi-finalists at the weekend shows us the importance of having an opportunity to belong. To feel equal. Not lesser.

Armagh have been extremely inconsistent for several years. Thunderous, adventurous and magnificent for 15 minutes, then horrific for the next 15. A scintillating burst of football that gives them a goal or two and five or six points, followed by a spell of dumb fouling and stupid shooting and a general breakdown in confidence that loses them the game. We saw this with the Monaghan match in last year’s Ulster Championship. And again against Donegal in the Ulster Championship a few months ago when they lost by seven points on a scoreline of 1-16 to 0-12.

Since then, they finished off what was left of a sad Tyrone. Then, having looked like they were going to cruise to another heavy defeat against Donegal (a seven-point turnaround by Donegal eased them into a four-point lead by the 25th minute), the Donegal ‘keeper imploded, Armagh settled, and they went on to beat a Donegal team that has no ambition.

The thing about Armagh is that when they have these brilliant spells we say, “These boys can beat anybody”. Then, 20 minutes later, we say, “These boys can beat nobody.” As Gaelic Life’s Niall McCoy once said, you get all four divisions in one Armagh performance. There is no doubt that they have the potential to beat Galway, who have a soft underbelly. Championship football after all, is war without the guns, and Armagh have shown that (in spells) they can apply the correct level of ferocity and discipline.

Up until now, their problem has been a lack of confidence. When things go against them they collapse. Even given the frailties of Tyrone (a ghost team this year) and Donegal (no ambition), they finally have a run of form, an antidote to the self doubt that has crippled them. This self doubt shows itself in a lack of composure. Silly shooting. Terrible passing. Panicky fouling when there is no need for it.

Galway are vulnerable. Paul Conroy is a brilliant player but Walsh, for all his extravagant gifts, has not proven himself as a championship animal. In Connacht last year, the ferocious but limited Pádraig O’Hora never gave him a kick. In the rematch this year, Galway were so worried about a repeat that Walsh played at wing half-back. Comer I discount. He is a head down solo runner and solo agent. A media creation. They are a very big very strong team. They absolutely demolished Derry in the League. But I suspect that is what they are: a League team.

Armagh will lose if they do not keep iron discipline and composure throughout. But if they do retain it, they will win, and who (apart from Dublin) will want to play them?

I am staying for both days. It is a festival of football that our two great counties have been deprived of for far too long. Now, we are taking our place alongside the aristocrats. Watching our boys playing for something far more important than money.

As my late father used to say, “Without the GAA, we’d be savages like the English.”