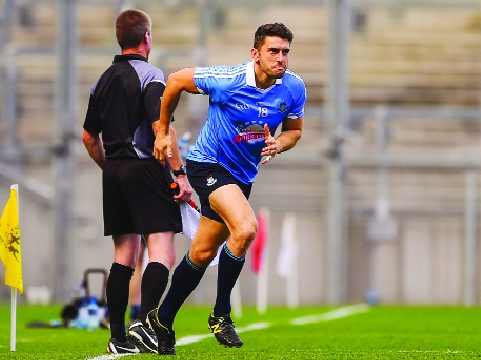 ONE of the most used lines in GAA nowadays is that ‘sure we all know it’s a 21-man game and that why it’s so important that everyone is on board’ or something to that effect.

Increasingly with each year that passes, and even with each week of championship football unfolding, this can be seen to be very true. Managers often talk about bringing on boys to finish the job or some managers even have a belief of finishing a game with a ‘stronger’ team than what they started with.

For years many observers would have maybe looked on and thought this was just a manager’s way of keeping subs interested, but all the evidence points to something different.

That’s why it was refreshing to hear Bernard Brogan talking last week about his current reduced role within the Dublin set up.

For years he was Dublin’s go-to guy, their marquee man up front whom the rest would put their faith in to pull something out of the bag and more often than not he delivered.

He was one of the guys who might have been having a poor game but would very rarely have been substituted given his potential to produce a game-defining moment. I agree with this, not that some players are too good to be replaced, but that some players have proven over the years their ability to deliver and they maybe do get that bit more leeway.

Now he’s talking about challenging to get on the matchday squad and he knows that if he does get game-time it will be limited to three or four chances. With that in mind, he is working hard and concentrating on getting everything right just for that chance.

It’s not until you are in this position yourself that you realise the respect for those guys who maybe don’t get as much game-time as the rest but who are still the ones who train every bit as hard and sacrifice just as much.

For 90 percent of my career I was like this. I was fortunate enough to start on all the teams I played for and was probably given a little bit more grace when it come to being substituted for playing poorly.

It wasn’t until my last season with Derry when I struggled with injuries and the hands of time were catching up on me that I found myself not starting for a team for the first time.

The psychological adjustment was the hardest part. I had to think about other ways to affect the game. This was maybe using my experience to chat to other players or set the tone in a warm-up just to try to have a positive impact on the result.

Then when the ball was thrown in there was very little else I could do but to sit and watch and maybe study the game in the chance I was called upon.

It’s not until you are in this position that you realise how tough it can be to be mentally prepared for a game as you maybe switch off a little. You are on the bench thinking about how you would have scored that chance or made that tackle or not have misplaced that pass. All this can be deemed a little bit selfish so to hear Bernard talk in the manner he did was quite refreshing.

It got me thinking then to the last few weeks of football and about how true all of this is.

Look at the games in the championship so far and the impact that the subs have made to some of the teams. Against Derry, the Tyrone subs scored 1-4 and they won the game by six points.

Take Roscommon against Mayo. All six replacements for Roscommon started the Connacht final last year and they all contributed heavily on the scoreboard as well as being involved in game-defining moments.

The Armagh bench contributed 2-4 in their one-point win over Down while they were on the other side of the coin against Cavan last week as Cian Mackey came on and saved the Breffni county.

On a more local level, it’s often noted that the backbone of any success at club level in seniors is a strong panel of 30-plus men and you often find that when a senior team is going well there is a strong reserve side to back this up.

My own club is a testament to this but like most other clubs nowadays it does get harder to get that many men to commit.

So before you go lamenting about the strength of a squad or indeed telling players who are not on the starting 15 they are wasting their time, think about how mentally tough it can be for these players themselves before they have to be dealing with all the negative vibes they might get from someone else.

Having experienced both sides, it is can be difficult enough for players not starting but they are just as important to the squad as the marquee forward.

If everyone who was a sub decided that on the Tuesday after a championship defeat they would not bother turning up then you would see the real value of having a strong squad, not just physically but also mentally.

As has been often pointed out over the last five years, it’s the strength of Dublin’s bench that sets them apart from other teams when the game might be in a melting pot.

Don’t be surprised to see games being decided not by those who start a match but by those who finish the game. They can make the difference, one Brogan is hoping to make himself.