Advertisement
HomeColumnistsGerard O'KaneGerard O’Kane – The Real GAA for all
Advertisement 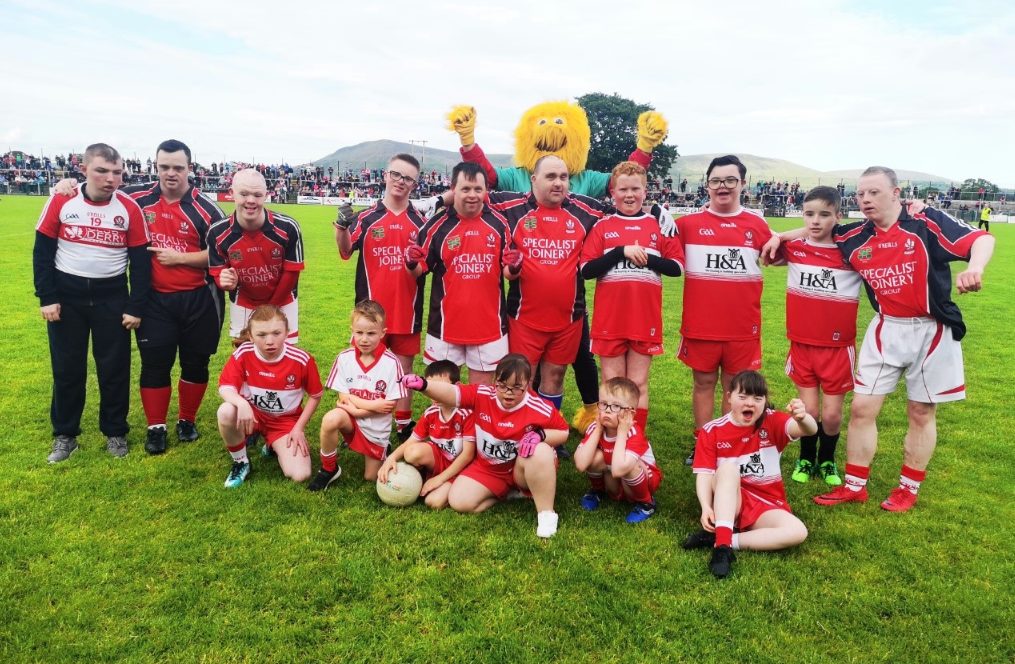 IF I was to use the term ‘GAA for All’, especially at this time of the year, people might think I was talking about the club footballer who in many counties is bereft of action at present due to the ongoing summer plans for a county team or the ‘Super 8s’, which are in full swing at the minute. This, however, could not be further away from what I’m talking about.

A few weeks ago when Derry played Laois, I was privileged enough to witness the joy that the GAA brings in the most simplest and purest form.

At half-time in the match instead of the stand at Owenbeg emptying, everyone remained in their seats and were delighted to witness a short-sided game from the ‘Derry GAA for All’ group.

This is a group that caters for people of all ages who suffer from any sort of learning difficulties or special needs. If you ask anyone who was there that afternoon at half-time and who witnessed the game, I’m sure they will all tell you that for that 10-minute match the result of the Qualifier game for Derry paled into insignificance.

The whole crowd were on their feet for the duration of the match and it was so uplifting to see the joy that the 10-minute period brought to those involved. I’ve seen some of the work that goes on with this GAA programme and the organisers and Derry GAA itself must be commended to the highest for providing the outlet for both these individuals and their families.

In today’s fast paced society, it’s all too easy to focus on ourselves and just push on through each day but if you ever get a chance to take in something like this it will make you think about what is important in life.

Sometimes those who are deemed vulnerable in society don’t get the same chances in life as others so to see the joy that emanated from this was something special.

The pitch was perfectly placed right in front of the stand. My sister, my father and I stood for the 10 minutes watching with the rest of the crowd as every kick, tackle, solo run and score was greeted with the loudest cheers of the day.

The fans around us from Laois remarked how great it was to see the players get so much joy from this and said it was one of the best initiatives they have seen for a long time.

I would know a Derry referee well, Anthony Campbell, and his son Anton was taking part. Anton is sports mad and a programme like this gives Anton the chance to take part in the sports that he follows with his father.

At one point in the game, Anton came through soloing the ball and put it into the roof of the net. He then wheeled away towards the stand saluting the crowd like something you would see in the Premier League on a Saturday afternoon. This was greeted with clapping and cheering from the crowd which was to the delight of Anton and the fellow players on the pitch.

As the final whistle blew, the crowd then got the chance to collectively salute the players in a round of applause that lasted over a minute. The players themselves lapped it up to the point where some of them wanted to remain on the field.

This may only have been a 10-minute match in which the score did not matter one bit but I’d imagine most people came away with a sense of perspective about what the GAA community can provide for everyone and that it’s not just the elite or even the club player who is to be catered for.

When we came home from the match that night and my mother was asking about how the evening went, the first point that we referenced was the ‘GAA for All’ half-time game before going on to dissect the Derry match itself.

I remember about 10 years ago when this scheme was getting off the ground there was an indoor training session in Glenullin and I was asked to come along just because I was a Derry player in close proximity.

Having done these sorts of things before I was planning on helping out with drills, giving a bit of a talk about what it’s like to represent my county, etc.

The reality of it was very different. Those involved didn’t care that I represented Derry – they were just there to have fun. No one wanted to be listening to me bleat on about the hard work that it takes and it was as basic as spending time, taking the seriousness out of it and having fun which was important.

Continuing to play for Derry meant that I never saw much of the work come to fruition at half-time because I would have been in the changing rooms. Those involved would maybe have given us a guard of honour coming onto the pitch at half-time and I would have missed the action out on the pitch but seeing it first hand was something else.

In an era where the GAA narrative and newsfeeds are dominated by fixtures, two tiers, elitism and much more that often brings conflicting views with self-interest to the forefront, everyone would do well to go onto the Derry GAA Twitter newsfeed (@Derrygaa) and look at the media section.

A video that was posted on Monday of young Sorcha Moran from Magherafelt taking a solo and a bounce and kicking a point, which had 30,000 views after just 24 hours, shows the delight that the GAA can bring to everyone, not just those who are kicking points in Croke Park on a Sunday.

James McClean had a similar impact on the Derry Down Syndrome team, the Oxford Bulls. They were formed in 2015 but were finding it hard to get a friendly organised. James went along to a training session, which in itself generated media interest, and we all got to see the impact initiatives like this make to the lives of those don’t get the same chances to participate in sport like the rest of us.

I know Seamus Coleman has done similar work with the Special Olympics Ireland team and for superstars like this to be giving their time to promote such worthy causes it should be something that all of us should bear in mind. Simply put, the giving of your time and effort can make a difference for other people.

In short, Derry GAA should be widely applauded and those within Derry who run the scheme are a credit to the GAA.

This is volunteerism in its purest form with people making a positive difference in the lives of others, not for their own self-gratification but simply just to see that something so small and so simple can make a massive difference to others and give people the freedom to enjoy a sport that can be enjoyed by all.