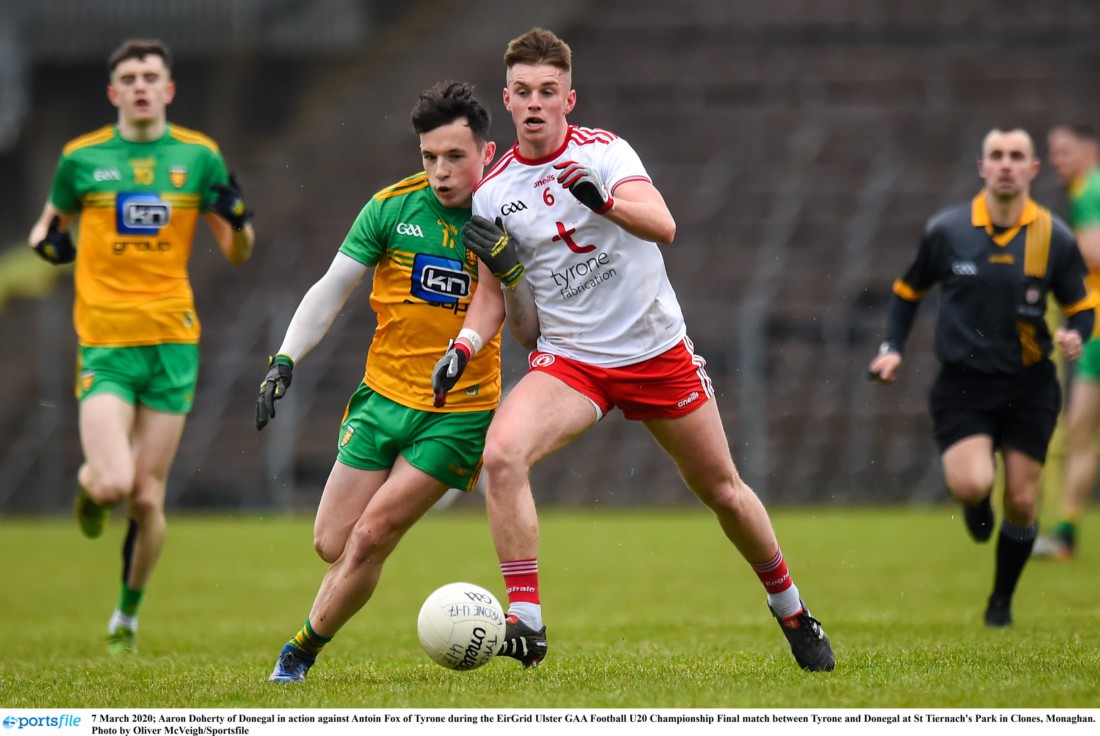 7 March 2020; Aaron Doherty of Donegal in action against Antoin Fox of Tyrone during the EirGrid Ulster GAA Football U20 Championship Final match between Tyrone and Donegal at St Tiernach's Park in Clones, Monaghan. Photo by Oliver McVeigh/Sportsfile

I AM usually quite a positive person by nature but I am also a realist and in the era we are currently living in, this realism is serving me well.

It gives me a balance. I am not a Covid doom and gloom merchant but I don’t live in a world where expectations are not based on anything concrete.

Trying to plan a wedding in the midst of all this has helped me. The initial stages of, ‘sure it will be okay in September, it is only early March’ soon moved to, ‘we might need to make a decision soon here because any prospect of using alternative dates is fast decreasing’. The tearing off of the plaster and actually moving the date to 2021 puts it at the back of your mind again in the sense that ‘aw look sure it’s next May – it will all be okay by then’.

Now as we move into the first week of January 2021 the news in the last 10 days has maybe made me rethink all that again.

I was always thinking about the practical terms of it all and as we approach the new GAA season my view is still the same. This, coupled with the news on Tuesday morning that the date for inter-county teams to resume training has been pushed back until the end of January at the earliest, makes me think it could be more of the same for the GAA in the coming season.

Given all of this we have to ask ourselves what a successful GAA season would look like. With the new split-season coming into effect and the county season due to be played off before the club season commences, we have to temper our expectations in what realistically the season will look like.

Last year county boards had their own autonomy on how to run their affairs. Tyrone went for a league with seven games and knockout championship, meaning every team got at least eight games with the eventual finalists getting 11. Derry went for a round-robin championship then a knockout with every team guaranteed four games and the winners guaranteed seven.

Both systems have their own merits but looking back at games is where it is at for players. My own personal situation – I went off injured at half time in the first championship game and as we only got the four games, my season was over there and then.

I never sufficiently recovered enough to play another minute given the short timescales we were working with. I had done all the training and was working away in rehab but time and mileage takes its toll on the body and a hamstring injury at 35 is a four- to six-week injury. That’s just my own personal situation so I for one am being realistic about the year ahead.

A normal club season – starting the leagues in late March, early April and playing around 14 league games before running into a championship beginning in August – is more than likely not going to hapen..

It’s going to be a case of a second season facing interruptions due to Covid. Where possible I would urge each county board, working within the parameters of safety obviously, to give as many games as possible in whatever fashion it is.

Players need games to keep them engaged, that carrot at the end of a training block. Last season taught us that a four- or six-week pre-season might be sufficient for players doing their own individual stuff at the minute, but be careful of the burn-out if the prospect of games just gets pushed further and further away.

It’s advisable to keep ticking over for your own health and well-being but don’t be thinking of training like something out of a Rocky film as a New Year’s resolution because by mid-February you might just sicken yourself. Pace yourself – it’s like that story of the old bull and the young bull heading down the field to the cows. I’m sure most of you know how that one ends.

As I enter my twilight years I am just glad to be able to be playing football so hopefully with some resemblance of society returning to normal by the second half of the year a somewhat fractured club season can take place at some level, but I am also realistic.

It is a case of living day-to-day on the issue and trying to plan anything is a nightmare. Plans can be put in place okay, but a Plan B and Plan C are probably needed too instead of making it up on the hoof. The GAA are better than that.

I’m lucky enough we have a home gym set up so as I ease my way back into some training and gym work, the idea of a club season in the summer is at the forefront of my thinking. But also making sure that the 2020 wedding outfit is still slim-fit in 2021 is the challenge in the early part of the year.