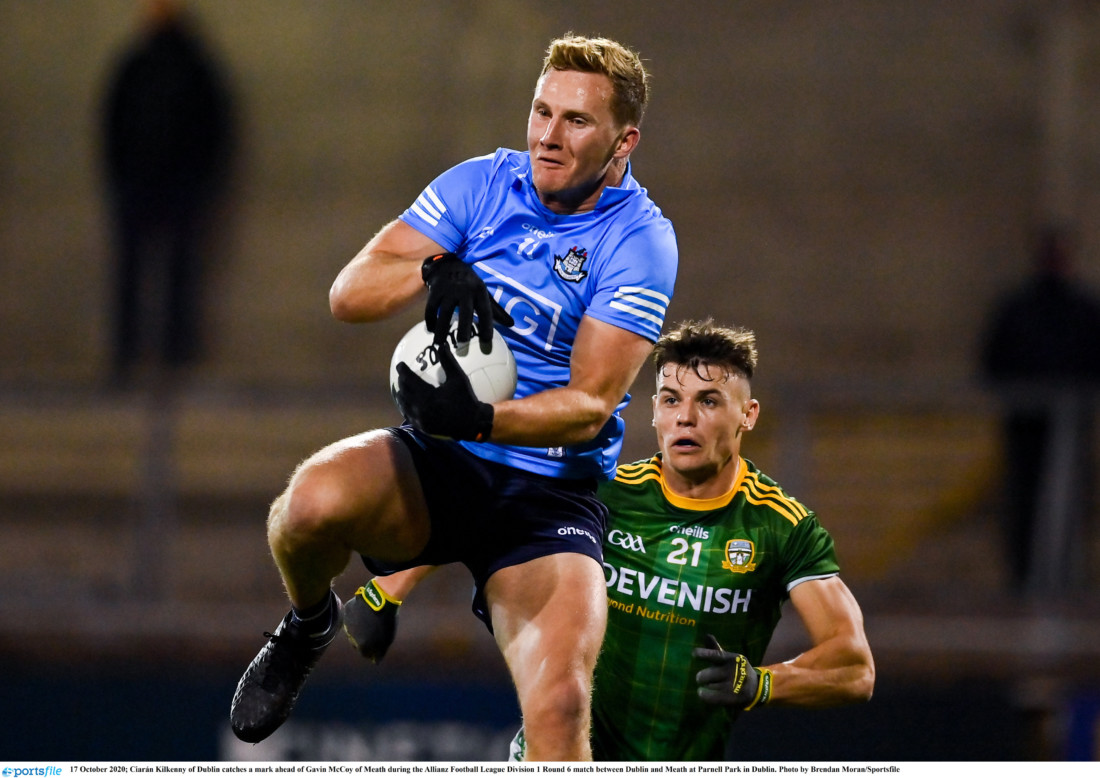 17 October 2020; Ciarán Kilkenny of Dublin catches a mark ahead of Gavin McCoy of Meath during the Allianz Football League Division 1 Round 6 match between Dublin and Meath at Parnell Park in Dublin. Photo by Brendan Moran/Sportsfile

A QUICK glance on Twitter on Sunday night and it’s all negative and doom and gloom – and that’s just the GAA.

Around three months ago I went on and muted 15-plus words such as Covid, lockdown, pandemic etc. It was the first time I had ever muted anything on Twitter and I have got into the habit of doing it over the last while.

It’s for this reason I was close to muting The Sunday Game on my Twitter the other night as after watching it live I didn’t feel I needed to be seeing it repeated over and over on my timeline.

I do fully get that a 10-minute segment is nowhere near long enough to even begin to scratch the surface of the opening paragraph of a debate around the dominance of the Dublin in the GAA and neither is a 1000-word piece on paper – both will probably leave more questions than give actual answers.

I don’t know Pat Gilroy, I’ve never met him and any reports I have heard about him have always been massively positive. He has cemented his place in the history of Dublin GAA and is a very successful business man in his own right, so far be it from me to question his wisdom.

However, I felt the longer he went on Sunday night the more he was going off the topic and making suggestions which nearly sounded as if they were not prepared and were made up on the spot. It all depends on what side of the argument you are coming from. Is it ‘what can be done to rein Dublin back in to make it a level playing field’ or ‘what can be done to bring other counties up to the standard of Dublin and have them competing?’

The answer probably lies in the middle. Pat Gilroy obviously has a good grasp on the idea of the funding and structures of localised county boards etc, and how these might be managed better by the GAA to deliver more value for money and bring the standard in every county up to a level so that they are ticking all the right boxes off the pitch.

While these do not put the ball over the bar, they certainly help the overall structures. But then to start to talk about amalgamations of counties – surely the very essence of the inter-county championship would be done away with if that was the case as it would no longer be counties playing against each other.

There is definitely something to be done around a blank canvas of fixtures etc, and maybe who Dublin play in the championship on a regular basis and to separate the provincial from the All-Ireland series, but amalgamations at county level just wouldn’t work.

I saw it mooted that  to spite our lovely neighbours over the Sperrins, we should join and be called Londontyrone.  I spent my childhood at games in Clones listening to the chant, “there is no London in Tyrone.”

The other idea that one of the reasons Dublin are so far ahead is down to the good, honest volunteers they have in all their club set-ups right through to their county set up is somewhat patronising. Show me a county that does not have similar volunteers, it’s how clubs and counties survive.

I could look around Derry and within a 10-mile radius of the mid-belly of the county name any number of clubs who have volunteers every bit as good at coaching as those volunteer coaches in Dublin, and this is the same all over Ireland.

What these clubs don’t have is the extra help in centrally funded GDOs, people who are experienced in their area of work.That is what was left out of the volunteer argument.

This is partly the reason I don’t buy the argument of a lot of Dublin people of why nothing was done when Kilkenny were chasing five in-a-row or when Kerry where dominating in the ‘80s, because this was a generational thing.

These teams did come to an end – Kerry enduring a 12-year barren spell to 1997 and by next season Kilkenny will be in their sixth season without winning the All-Ireland. These teams were not initially centrally funded by Croke Park to get the ball rolling and the continuation of this funding has just widened the gap.

While this might sound patronising coming from myself it’s certainly not meant to be, but I don’t think people involved in Dublin GAA realise the problems faced by most of the other 31 counties in Ireland.

There is no excuse for the people on committees at Croke Park as they are all drawn from all over Ireland so their own awareness of issues should be at the forefront of their thinking. That’s not to say those involved at club level in Dublin have no issues of their own, of course they do.

There are stories of club sides having four or five teams at one level and that proving to be a logistical nightmare. Getting a patch of grass for a lot of Dublin clubs to train can be a nightmare and often it cannot be facilitated. This is mainly a Dublin problem.

Outside of Dublin, most GAA clubs, especially in rural settings, have two or three pitches to choose from. These other 31 counties (even Cork as Cork city does not host a mass of clubs like Dublin) have similar rural issues. They are all the same in that regard whether it is a lack of footfall, proposed amalgamations out of necessity and over time we have seen a few clubs locally opt out of a season at both underage and senior level due to reason like this.

I realise someone reading this might say I have not provided any reasonable solutions to the issues but a bit like the time constraints on The Sunday Game, I am held back by how much I can write.

I would point you to my own county Derry’s recent launch of their coaching and development strategy from 2021-2026 as a means of trying something and being progressive. It may take a few years before the fruit of that labour is witnessed, but if the same thing is continually done over and over then the same results will be produced.

There are far more experienced men than me who are more radical in their thinking. Getting these men together and getting them all to leave their own agendas at the door would be a good start in getting the ball rolling. But I do know one thing, in 2030 I will not be going to Casement to be shouting for Londontyrone!