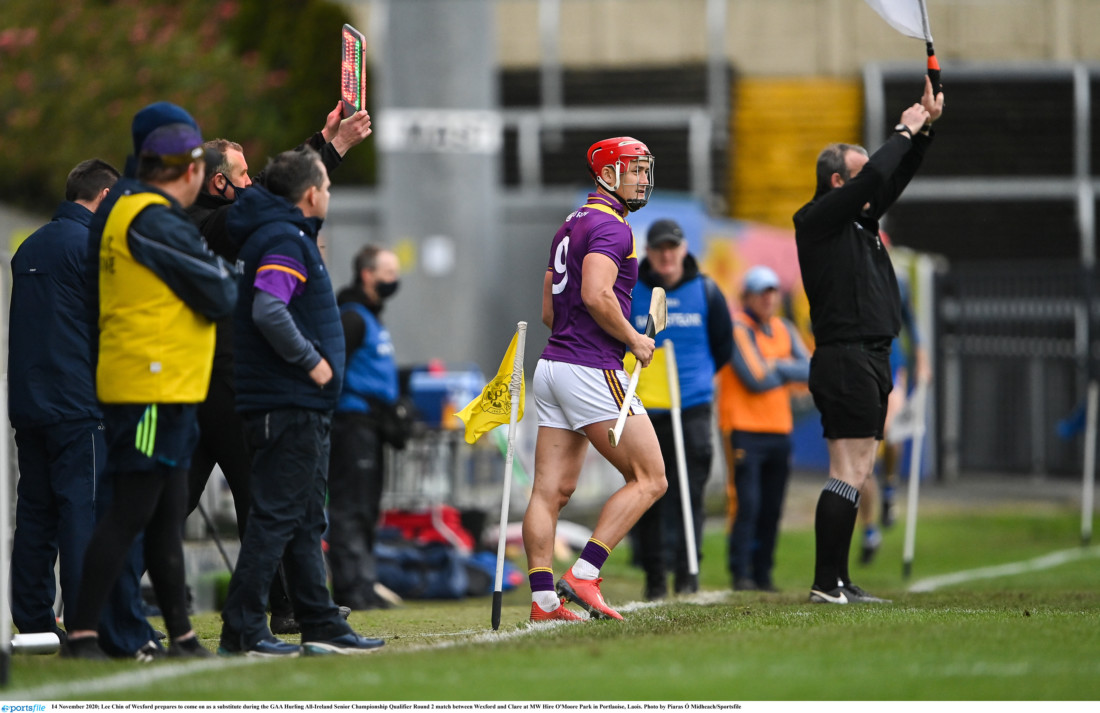 14 November 2020; Lee Chin of Wexford prepares to come on as a substitute during the GAA Hurling All-Ireland Senior Championship Qualifier Round 2 match between Wexford and Clare at MW Hire O'Moore Park in Portlaoise, Laois. Photo by Piaras Ó Mídheach/Sportsfile

A FEW evenings ago, I spoke with a client on a zoom call. He is the manager of a men’s senior Gaelic team, and participates on my mental performance program (@backboneprogram).

After the scheduled hour, we stopped talking about the topic for that session (the ego) and fell upon lighter things – he wanted to know my opinion on how to create full team buy-in.

We spoke about many things, including the importance of individual roles within a team environment, but my ultimate conclusion was that in order to have everyone’s attention in a group environment -and therefore their participation – they must all feel like they can have the opportunity to contribute at any stage, in any conversation. They must all feel valued and comfortable enough to be able to raise their voice. It’s not rocket science -and I’m not the first to state it.

In the majority of our club changing rooms, this isn’t the case.

On the intercounty scene, there is certainly a drive to create culture, more and more is being done to make the atmosphere inclusive, but, as my client asked, how do we get those least verbal to speak their truths?

In stead of answering how, I proceeded to ask myself something else. What exactly would change if communication became a simple thing? If we could openly, and honestly say what we felt -inside the changing room -what would improve for us and for our team?

I thought about my own footballing past; what were the things I most wanted to say, but felt like I couldn’t? How did those silences impact my team? If I had spoken, would my team have benefitted?

The thing that started to seep through was the amount of times I knew I wasn’t on my game, but never thought I could ask to come off. We frown at people who ask to be substituted. But let’s face it, there are days we don’t want it; we throw our gear in our bags, drive to the game, get changed, line out, the ball goes up, and our head is still back home in our bedroom, thinking about the complications of real life. There are bills to pay, there is that assignment overdue which could lead to failing the academic year, there is that partner ready to leave us, or one ready to join. And to slog it out on a football field just doesn’t take precedence.

There are days when we’ve already worked too hard somewhere else, and no longer have the resources to expend. And yet, to admit that you aren’t right or are not on form feels like the last thing you can do. Why? Surely having someone take your place who will perform better, is of greater benefit to the team?

Substitutions are an extremely strange thing. While everything else in the game is changing, being nibbled at or spliced open to see if we can find an advantage in it, substitutions are still mostly done in that archaic way. They are still – more or less -in the hands of the manager. And rightly so, says you. Well, not necessarily.

Of course, if I say that the players themselves should be calling their substitutions, then you’ll say that no-one will take themselves off. But here-in lies the problem; knowing that you aren’t at it, and continuing to stay on goes against the fundamental pillar of team sport – the health of the team comes first. It would be more beneficial to the team if someone else took your place. Only you really know where you are, and only you can really call that.

So how does that look in practice?

In an ideal world, admitting that you aren’t at the races would be normal, and you could hold your hand up at any stage of the game – without prompt or outside influence -and come off.

Failing that, in an ideal world, your manager would see that things aren’t going well for you and give you indication, “hey, what way are you? Are you not feeling it?” Perhaps that might be the spark that snaps you out of your lull, and you manage to pick it up. But even then, it’s your call, the responsibility and decision lies with you. ‘All is good, I’ll get myself into this,’ or ‘You’re right, I’m not at it today’. It’s your choice. The days of an early 10-minute substitution should be banished to the same place the French banished the guillotine –  for it has the same effect.

Managers, if you want to destroy a career, just follow your ego and take someone off early. Consciously, a player can come back from that – eventually -but subconsciously you’ve created such emotional trauma, that the survival mind will manifest all sorts of anxieties, panic and resistance before it allows that player to step back on a field again. You’ve sent the horse to the glue factory.

You can’t say it’s for the benefit of the team because the message that you’ve just put out is that it could happen to any of them. A team playing with fear of embarrassment, handed out by what is supposed to be their biggest protector, won’t play well at all.

Again, five minutes later, the manager puts out the feelers, ‘what way are you? It doesn’t seem to be happening for you today,’ and again, it’s up to the player to take responsibility for that decision. In an ideal world, the idea of team will be at the forefront of his/her mind and they’ll know what the right call will be.

Perhaps, your team puts a system in place, three check-ins from a manager, then it’s their decision. If, after three check-ins, your performance hasn’t improved, then your very presence out on the field is an indication that you are only thinking about yourself and not the bigger picture – it’s a good framework to show that your values don’t quite match up with that of your team, and you then merit being taken off.

Who knows? Perhaps it’s an unrealistic approach, but it’s worth a try, no?

Speaking your truth, feeling valued, these are keys to high performance, but we can’t just implement them in certain areas, and not others – they have to come in across the board.