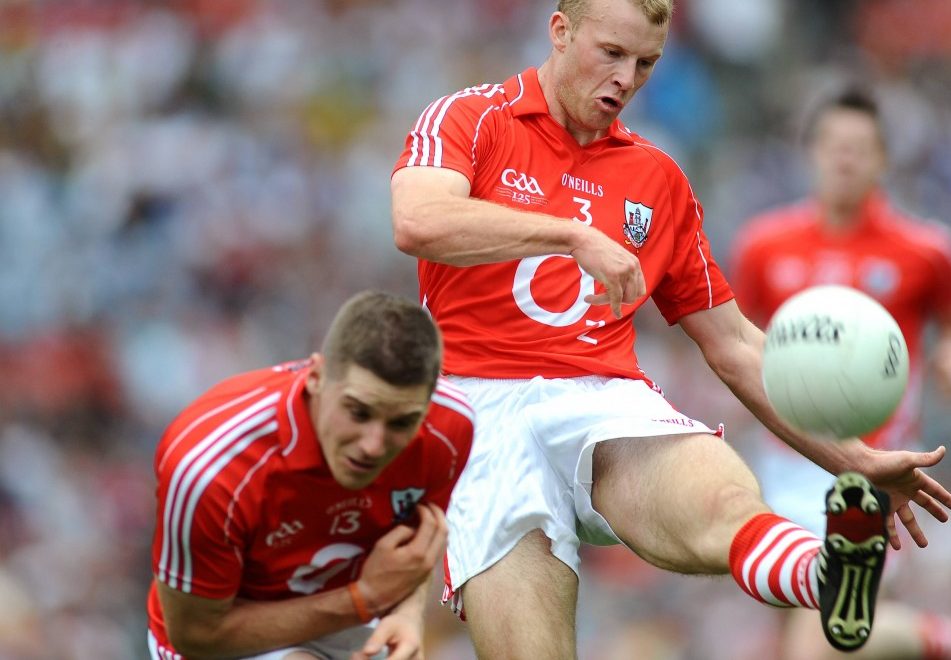 “I was being protected from a danger from behind – but for the sideline watcher
I was ‘yella’.”

My own footballing career was underwhelming. Playing both Gaelic and soccer, yet preferring the latter for the majority of my playing days, I found it difficult to transfer both my abilities and enjoyment into our national sport. Like most kids, I had either training or a match every day. Unbeknownst to me, I was accumulating quite a number of physical and mental traumas that would later come to the fore in surprising and debilitating ways.

Broken fingers, broken toes, torn muscles, ruptured ligaments, dislocated joints, concussions – a catalogue of common physical injuries before the age of 15 – one physical setback after another. And to each physical injury assigned its own emotional trauma: embarrassment, fear, pain, anxiety, vulnerability.

When I was fifteen, I took a game that I should never have taken for a senior soccer team that my brother was involved with. I was good at soccer, so played extremely well, and succumbing to his frustration at being outplayed by someone years younger, the physically robust centre forward head-butted me on the back of my head, knocking me unconscious and causing the abandonment of the game.

A year later my GAA club (Maghery Sean McDermott’s) were to have a senior reserve game against a team for whom the perpetrator of the head-butt played.

The message was quickly passed to me that I would have my chance to get my own back. The fear, and memory of that head-butt caused me to panic, and I declined the game, feigning injury – what was I really supposed to do to a grown man at 16? My absence was noted by my teammates.

This was not my first experience of a painful injury caused by a tackle from behind – I had already accumulated a few. At under 12 level I played in a friendly against Armagh Harps.

Within 15 minutes, I was left lying on my stomach. I was then stretchered off and brought by ambulance to Craigavon Area Hospital A&E. I suffered almost an hour of fear and embarrassment as two sets of adults – parents and coaching staff from both teams – stood over me, while I lay freezing cold, supine on the stretcher on the changing room floor, waiting for the ambulance to come. There was even more embarrassment as the diagnosis stated that I had only been ‘winded’.

Finally, at 17, I made my debut for my club senior team. I had put in an intensive training camp for my school’s (St Patrick’s Academy) MacRory Cup campaign.

I was a bit-part player, but the experience of high level training 3 times a week allowed me to hone my skills (to focus for the first time solely on GAA and not soccer) and I was learning the ‘dark arts’ of Gaelic football from those players on Armagh and Tyrone county minor squads.

I went into that breakthrough year physically and technically at my best, and made my senior club debut in midfield producing an extremely positive and promising performance.

The following game against Ballinderry, I strutted out of the changing rooms to the warm-ups, did my stretches and nonchalantly kicked over some practice 45s.

I felt like I was finally going to fill my promise in GAA, to shed that image of a soccer player which had always stuck to me, and to silence the doubters and negative voices within the team set-up itself. Within 10 minutes of the throw-in, I was on my back, completely confused, with a badly broken wrist. I had gone to collect a pass, and somehow, having been challenged from behind, was left on the grass.

Little did I understand that my survival mind, my subconscious mind had been keeping tabs. Our subconscious mind has one important job – to keep us safe on this planet – and without knowing it, mine was downloading the belief that pain and danger were coming from behind any time I went to collect the ball.

Consciously, these incidents can be forgotten faster than it takes for a broken bone to heal, but unless a subconscious belief is intentionally challenged, it will always remain.

After a few months recovery, I excitedly took to the field in my comeback game – a reserve (B-league) match against local rivals Tír na nÓg (Portadown). After five minutes, I was given a ten metre pass.

Consciously, I was already imagining what I was going to do next, throw my bodyweight right, then move back to my left and drive the ball in to our corner forward, who would no doubt already be in front of his man.

I knew exactly what I was to do, I had successfully executed this movement hundreds of times before, it was my favourite thing to do.

What happened was something else – my subconscious mind felt the presence at my back, I let go of the ball and my body violently shirked to the side. I was being protected from a danger from behind – but for the sideline watcher I was ‘yella’.

My career was over, I was immediately punished by my manager by being demoted to goalkeeper. Filled with embarrassment from his swift and negative response, I never played again.

To all who had been present, I had committed the cardinal sin, I had avoided a physical challenge. To me, I had involuntarily let go of the ball, I had uncontrollably done something that I hadn’t intended – or wanted – and which certainly wasn’t beneficial to my performance. To each of my previous physical pains, I had attached huge emotional pain – embarrassment, vulnerability, fear – and my subconscious mind had downloaded a survival belief that it was now executing.

This was my first experience of Repetitive Sports Performance Problems (RSPPs). They are a byproduct of the gradual accumulation within an athlete’s brain and body of physical and emotional injuries over the course of an athlete’s life and career. And they produce uncontrollable reactions, yips, unexplained performance slumps, choking, freezing and other peak performance inhibiting issues.

Coaches, teammates, fans, the media – all offer their opinions on what is ‘really’ wrong. But by saying things like “he’s weak”, “she doesn’t want it”, “he’s a quitter”, they only add to the tremendous misunderstanding surrounding the issue.

The cause is something much deeper. Playing sports – like daily life – exposes us to both physical and emotional traumas, making us vulnerable to frequent negative experiences and if they are not treated and released, they will remain and affect the athlete throughout their sporting career and longer.

In my next article I will explain how I, and many like me, was able to overcome my RSPPs with the help of subconscious reprogramming and hypnosis. I belief is only a belief until you challenge it – performance ‘slumps’ and ‘choking’ are becoming terms of the past.

PART TWO OF THIS THREE PART SERIES WILL APPEAR NEXT WEEK