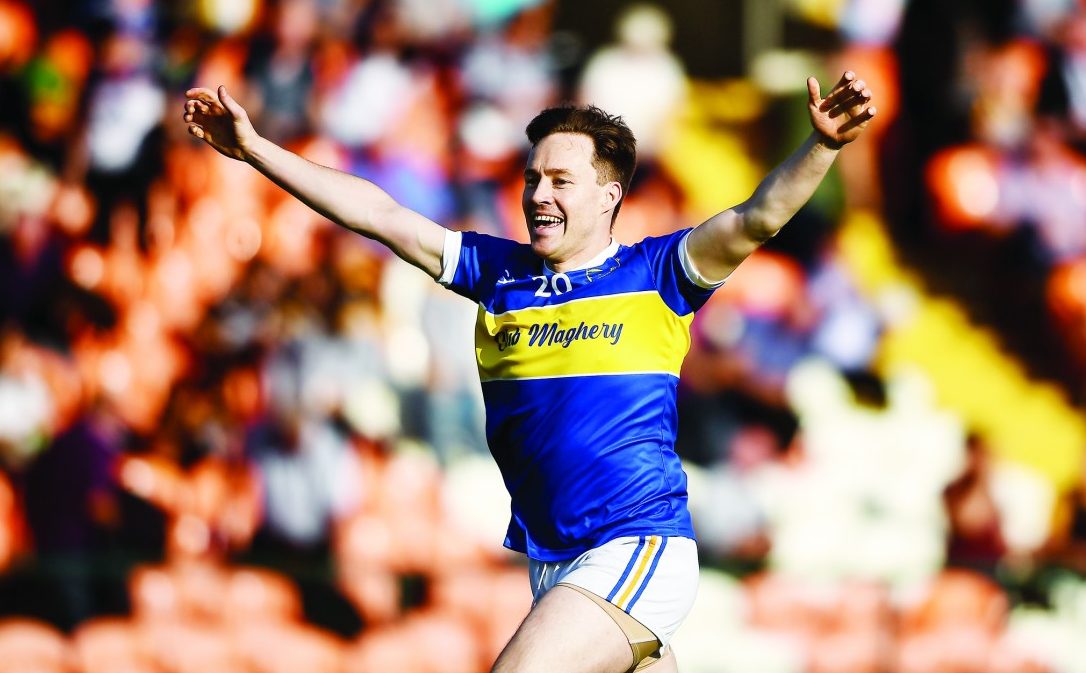 A cliché is a phrase or opinion that is overused and betrays a lack of original thought.

Of late, I’ve been paying close attention to clichés, for in them I believe we find providence. And there is one in particular that is worth its weight in gold.

I wasn’t able to go to the Athletic Grounds in Armagh to watch the Senior Championship final last weekend. Having just returned from France – and so under a 14-day mandatory quarantine – I watched the game on Armagh TV. I had a vested interest; yes I’m from Maghery, but I had also been working with some of the players throughout the year, and was excited to see how they would perform.

Joe Brolly described the game on his Twitter account as “another thrilling, war-like Armagh championship final,” and it was. From the neutral to the fanatic, everyone was entralled. Gaelic football at its dramatic, sublime best. The streaming coverage was as shaky and inconsistent as the refereeing – and all crescendo-ing incredibly with a Maghery win. To quote the UFC’s Nate Diaz after he unexpectedly submitted Conor McGregor, “I’m not surprised mother *******.” And truth be told, I wasn’t. But why?

Given their histories, given their forms going into the game, Cross were favourites. They are notoriously difficult to defeat in finals – you only have to look at Aaron Kernan’s trophy cabinets to see just how dominant they have been.

Maghery, on the contrary, had only won one previous title in their history, in 2016. And in 2017 they had seemingly lost all momentum after a crushing defeat by Armagh Harps in the final, which turned the volume up on certain doubters within the county who didn’t believe they would ever win another.

But I believed Maghery would win … because they believed they would win. It is as simple as that.

As I said, I had been working with some of the players throughout the year. Communicating through email, working via Zoom, focusing on the individual, but all the time sharing and swapping ideas on what environment is needed to create a winning team. And the resounding notion from the players was that there was something brewing ‘over the bridge’ – no one was sure what, but they could feel it. I remember distinctly asking a senior member of the squad about the manager Finnian Moriarty, how he was getting on with the players. He replied, “he’s very open and approachable. The players buy in to what he’s selling.”

And therein hides the key to Sunday’s win; the cliché which prophesises victory.

Crossmaglen tried to rally multiple times, but each time they did, Maghery stepped away. That is a sign of a team no-longer afraid of losing, a time with full belief they are going to win. A team fully accepting of the bigger picture. It takes an incredibly inclusive team environment to be brave enough to take on a goal opportunity, especially in a championship final, and especially against Cross. Maghery scored four. They were ruthless. Those are not the scores of a team caught up in self-doubt. Those were the expressions of players allowed to play.

I’ve watched Maghery’s progression through the championship this year, as a fan, first and foremost, but also now as a performance therapist. The signs were evident. Listen to the players interviewed after any game: Stephen Cusack, Stefan and Aidan Forker, James Lavery –one thing was clear in all interviews, the focus was on winning. In his pre-match mandatory interview before the final, captain David Lavery was extremely direct when asked about the team’s form. ‘Our form means nothing to us,’ he said, Maghery will find a way to win. And they did, because they believed they would.

I’ve talked a lot in this column about ‘belief’, as I’m sure I will continue to do in the future, because I understand its importance. Nothing is gained without it. Nothing moves forward if it’s not there. A team must all buy into what the manager is selling, together. And whatever Finnian Moriarty was selling, his team have bought into it.

Belief is how you slay the dragon, and Cross were slain because Maghery believed they could.