Fionnuala Carr explains what it is like to be from a family which is so dedicated to Down GAA. 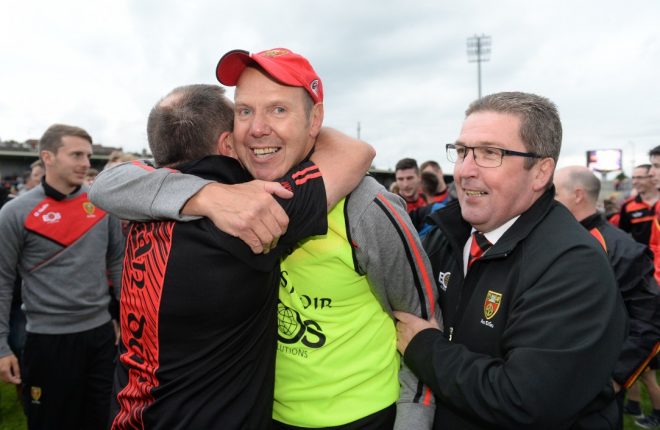 A Down fan congratulates Eamonn Burns following their win over Monaghan

There is nothing like the summer months in the GAA to get the blood flowing and the excitement levels rising.

This year might be a bit different for Down folk though with an unexpected Ulster Final appearance beckoning.

What a great place it is to be in, no one can say that the Championship despite its current format gives added value to all the teams in it.

For as long as I can remember we have always had a personal interest whenever Down were playing we were on the road following.

This can be said for a lot of families involved in the GAA and that’s what makes it special.

This summer has been no different to others when you start out you are filled with the familiar feeling of excitement, hope, expectation, the dread of preseason and the resulting pain.

Wondering are you half mad running around in the muck and gutters in the pitch dark but every time you train it is with the emphasis of improving yourself so that you and your team are in the best possible condition for the summer months.

Not every year will end in a success and we have had more disappointments than we have had successes but each year the familiar feelings return and each year you go again.

Being in a house like ours there is very little getting in the way of the GAA, most of the conversations are built around trainings that night or matches at the weekend.

When we were younger we always followed Down because my Dad played for a good few years, this is definitely something that inspired us to want to play ourselves.

Aidan and I both got to see the two Down All Ireland wins in the ’90s and the celebrations on the pitch and the banquets after are something that we will never forget. If Down where to win anything now I do think the celebrations would be a lot different for us now that they were back then!

When we were younger the mornings of matches were filled with nervous excitement and tension, these days it’s no different at all.

When you have family members and close friends involved then there is always an added stress or tension.

The life of a spectator is much harder when a match is being played than it is for a player. When you’re a player you feel in control or a small bit removed from what’s going on around you, as a spectator you are sitting helpless wishing the best for the players on the field.

When I got back to work on the Monday after the Monaghan game, someone asked me “well did you enjoy the match on Saturday” not one bit I answered.

Firstly you want them playing, then you want them to play well, hoping against hope for the win and then by the time all that worry is done you then have to worry about the result!

I genuinely do not know how my mum has coped with a husband and five children all playing for Down in championship games at one stage or another.

The last time Down where in an Ulster Final they played a Donegal team who were close to their best, this time they will face a similar scenario when they face a Tyrone team who harbour ambitions of challenging for the Sam Maguire.

I simply love a Championship Sunday the bigger the match the better and the harder the challenge the better, imaging that winning feeling of sheer relief and ecstasy, this is a feeling I only hope that Aidan and the rest of the Down players get to feel next week.

Best of luck to the Down camogs who play Galway in Pairc Elser today, a victory here will set them up in good stead for the final two games.