Fionnuala Carr is worried about the long term effect of our games. 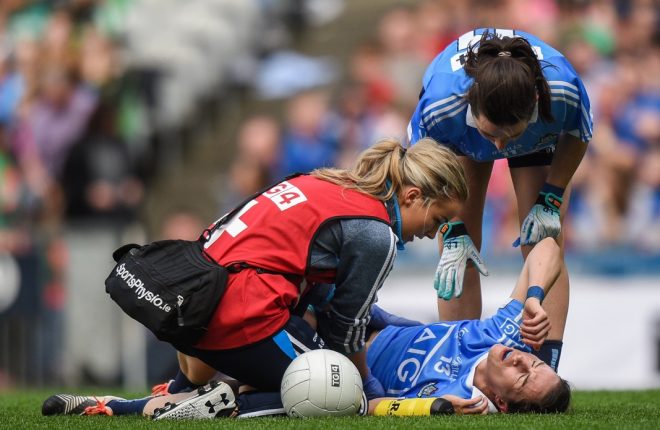 The demands of football is putting players health in jeopardy

I read an interview recently which has made me wonder about the physical demands being put on GAA players now.

At just the age of 27, Darach Honan has retired from playing hurling. The main reason being is the physical toll that is being put on his body and the stark reality that he would have needed a hip operation before the age of 30.

Unfortunately Darach isn’t the only one and it makes me wonder about the impacts of modern day training on GAA players in 20 to 30 years time.

The players that play GAA now are athletes in every sense of the word. The time spent in gyms and on the pitch is as close to a professional athlete as you are likely to get.

Players enjoy it, enjoy training, enjoy being part of it and do it because they love it, most are doing if from an early childhood.

I sometimes wonder can something be done at a younger age to prevent the constant niggly injuries at an older age.

I would like to just say that I am in no way a medical expert and these are just thoughts I have had after a recent injury and reading the aforementioned article.

My medical experience is the magic spray and pouring water on any type of knock!

The physicality of our games especially hurling and camogie is increasing year on year, it seems the harder the hit the better and equally the reaction of the crowd but these collisions have also been described as similar to a high speed car collision, so the physical contact and impact has to have some sort of negative impact on players’ bodies.

I seriously injured my ankle during the summer and after giving it all the time and rehab prescribed there are still days when I have a constant ache in my ankle, I’m 33 and still playing.

If I had any sense I should follow the example of Darach, but I simply love playing.

When I was younger everything was geared towards first touch and hand eye coordination which is the most important part of being a camog or a hurler but I am still doing that type of training 30 years later, I wonder if there was some sort of other training that could be incorporated into underage GAA would it help prevent the common overuse injuries that players are experiencing now?

There are many coaching courses available now through the Camogie Association, LGFA and the GAA, could coaches now be shown how to incorporate stretching or strengthening into every session?

Obviously people and coaches would have to be shown by a qualified expert and the benefits explained.

Most adult teams now have a strength and conditioning coach or some sort of qualified instructor among their management team now but if this was available as part of the coaching course it could have long-term benefits for all involved.

Also best wishes to our neighbours Rostrevor in their Ulster Final tomorrow. Super achievement for the club after a tough couple of years.