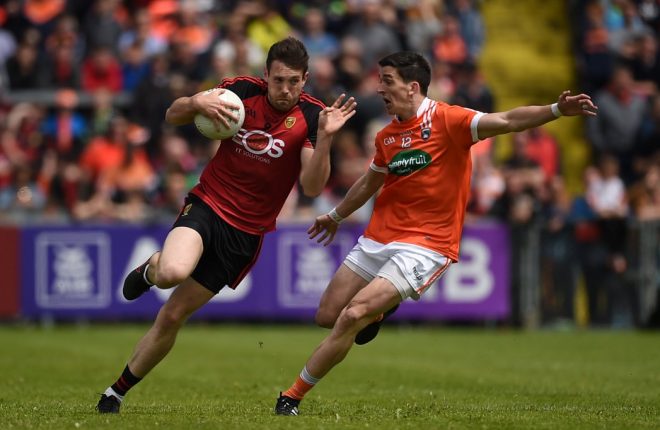 Fionnuala Carr says Niall Donnelly was one of the biggest finds for Down this year.

From their opening two league defeats to Fermanagh and Clare few would have predicted a Ulster Final appearance.

While I am never one to congratulate someone on a defeat whether they performed well or not, Eamonn Burns and his players deserve huge credit in turning their season around from where it was to where it ended.

This year will have told Eamonn a lot about his players and the way they responded to criticism when the chips were down will have filled him with a sense of pride.

The impact of getting that draw in Cork was of paramount importance for two reason;

1) the physical aspect of playing against better teams next year to keep improving development, and

2) The psychological lift it gave the players heading into the championship. Getting relegated is a very hard thing to put a positive spin on and had it not have been for that draw I do wonder about the mental strength and attitude of the players approaching the Armagh game. Thankfully this is not something we had to worry about.

They are probably not that far away in terms of ability but the amount of times they lose possession or slow the ball down by running into blind alleyways will have to be addressed if they are to improve further and push on again next year.

The starting Down team for the Championship is very young and one which we hope can only improve.

The find of the year for Down has to be Niall Donnelly, the big midfielder set the tone for victory over Armagh with a towering display, the half back line of Caolan Mooney, Conail McGovern and Daragh O’Hanlon were very solid and this could be a line which continues to dominate for the next few years.

Another huge positive for me was the form of Connaire Harrison, the big full forward delivered on his undoubted potential.

While he was quiet against Tyrone I would expect most full forward lines to be suffocated when playing Tyrone and the Down team in general didn’t reach the same heights as they had done in the previous two games.

Kevin McKernan, Aidan Carr and Mark Poland provided the leadership and experience required in order to get them over the line and the impact of the latter two along with David McKibbin was crucial in getting over the line against Armagh and Monaghan first time round.

Darren O’Hagan and Gerard McGovern were solid in the full back line and I would expect that this year there could be four to five Ulster All Stars coming to Down. Darren, Darragh O’Hanlon, Ryan Johnston, Kevin McKernan and Michael Cunningham are sure to be odds on for awards this year.

For now the year is over for Down senior footballers but it has given people a lot of hope that we aren’t as far down in the doldrums as a lot of people stated, the problem is now that there will be a renewed hope and a certain level of expectation among Down supporters.

The commitment required to be an intercounty these days is almost like having a second job and it can take its toll on people. The players will need to make more sacrifices, push themselves harder, be willing to learn from mistakes and change in order to improve and be successful.

It’s not that long ago many people were calling for Mickey Harte to step aside and that Tyrone were no longer the force that they once were.

Fast forward a few years and Tyrone are now the team that people are tipping to beat Dublin.

This Down team have shown this year that they have the ability required to compete, the mental strength that is needed when their backs are against the wall, it is this same mentality that will be required next year.

Just this week we have heard the news that final approval is going to the Ministry of Defence for the building of a Centre of Excellence in Ballykinlar, this was something people in Down were crying out for and 12 months ago this too seemed impossible but a lot of hard work from a lot of people has come to the fore.

Another step in the right direction and something that Down people will look forward to in the future.