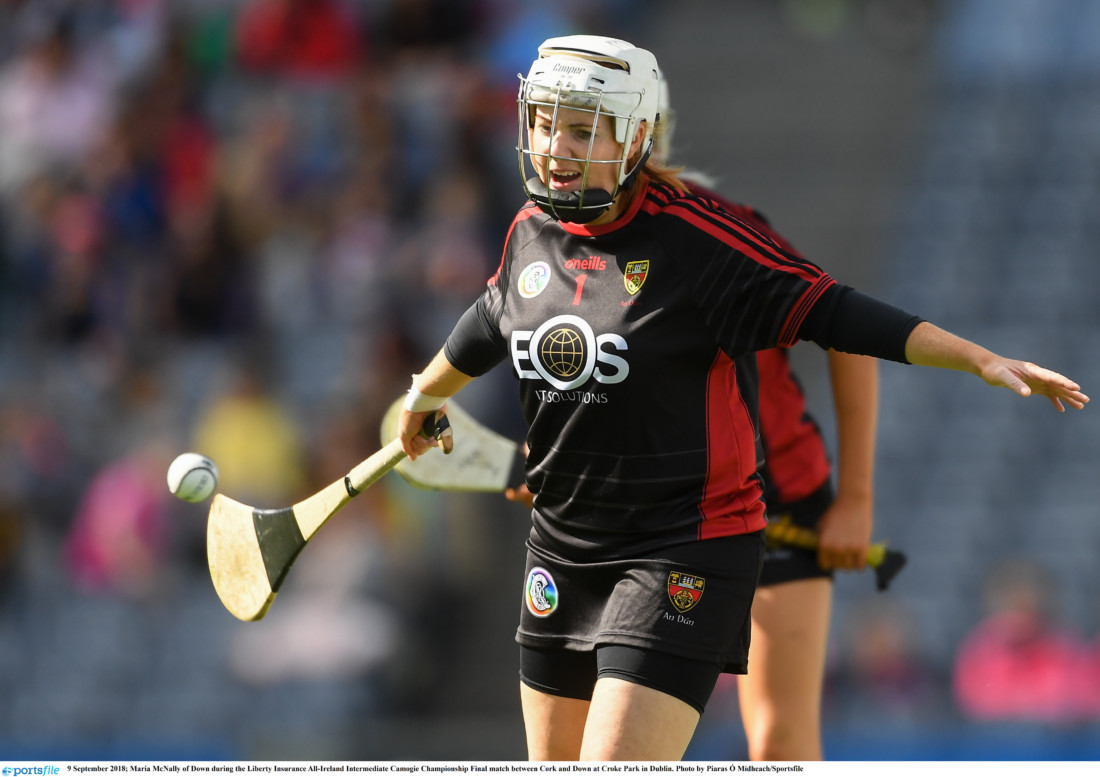 9 September 2018; Maria McNally of Down during the Liberty Insurance All-Ireland Intermediate Camogie Championship Final match between Cork and Down at Croke Park in Dublin. Photo by Piaras Ó Mídheach/Sportsfile

I WAS pleasantly surprised to hear that the Down camogs would play in the Senior Championship this season.

I wasn’t entirely sure that the Camogie Association would agree to it. I know a lot of work went on in the background with different people trying to get Down up to that level. I was delighted for the girls and delighted for Down and for Ulster Camogie in general.

Sometimes you feel like you are forgotten when it comes to hurling and camogie in the North. There is not the same level of interest, nor is there the same amount of work put into it as there would be in the South.

So it is great for so many reasons. I was delighted for the girls themselves, after the work they put in. They really deserved it. They are all delighted.

A lot of them are playing because they have the chance to represent Down. There are a lot of girls in there who are in their mid-twenties. So there is a lot of potential there.

It is great for Catherine McGourty, Sara-Louise (Graffin), Paula (Gribben) and Maria (McNally) who are a bit older, that they get their chance to represent their county.

I am fairly content with my decision to retire. I am a bit sad that I am not playing, but I am grateful that I was able to go out on the top, winning an All-Ireland.

The issue they face now is that elite status has been changed and there won’t be any camogie for a while. When I heard that I think I felt the same as every other player in the country in that I felt disappointment and frustration.

This lockdown has been so much more difficult than last year. Last year you were coming into the summer and you had something to look forward to. Then you got through the summer, and then when the lockdown came you had your training and you had your games. People were even able to watch club championships on TV. There was so much exposure to club championships. Then we had the intercounty season and we were going right up until December. So the All-Ireland finals were a week before Christmas so you had something to look forward to.

This time around you have nothing. We don’t know when the games are going to start, and if they are going to start. You can’t plan anything. I think people in society general are fed up, and they needed to do something.

I am not saying the decision are wrong. They are obviously done for medical reasons. But it is a very disheartening and disappointing situation for people.

But you could look at the positives. They made the decision early. It means now we know there is going to be a pause. Players should use that to their advantage. Last year I used the lockdown to put work into my strength and conditioning.

That’s something that players could be doing.

The Down camogs are going to be playing at the top level this year so this lockdown is not ideal. It is not ideal because the training last year was so good. They were playing well last year, and they were in excellent condition. It would have been easier for them this year if they had been able to continue that work into this year.

The other side is that, is that if they really want to play well and compete at senior level, they have something to focus on. There is a good chance that there will be games this year so their attitude should be that they have eight weeks now they can go and train pretty much as professional athletes. I hope that they take that time and do it.

I think if Down have more exposure at the top level will certainly help Ulster Camogie. When we saw Derry working at senior level in the past it had an add-on benefit for us because it made us want to achieve the same.

There is work that needs to be done at a grassroots level, but that work has to come from a national level. They have to give players more support and help them get to senior level. If Down get to senior level and can compete, and can compete against the tier one teams, then it will encourage those at the national level to support them. Then you have the knock-on effect in my own county of county players training and playing at a higher level than they ever have before. They will go back to their clubs and that will bring the club players on with them. The juveniles will be able to see those senior players and they will be inspired by them.

This all means that standards will all be raised. However, it shouldn’t be left for a county to do it all on its own. It takes everyone to do it. We all talk about Dublin, they are one county in 32, yet they were given their own development plan, and they were given their own finances to resource it. That is not just work that is done  in five years. That was done 15 years ago and wow they are going for seven All-Ireland titles in-a-row.

Those things that had to be put in place were put in at national level. The same approach should be made towards hurling and camogie. It is a popular sport but you don’t have the same amount of people playing it. So they need those resources.