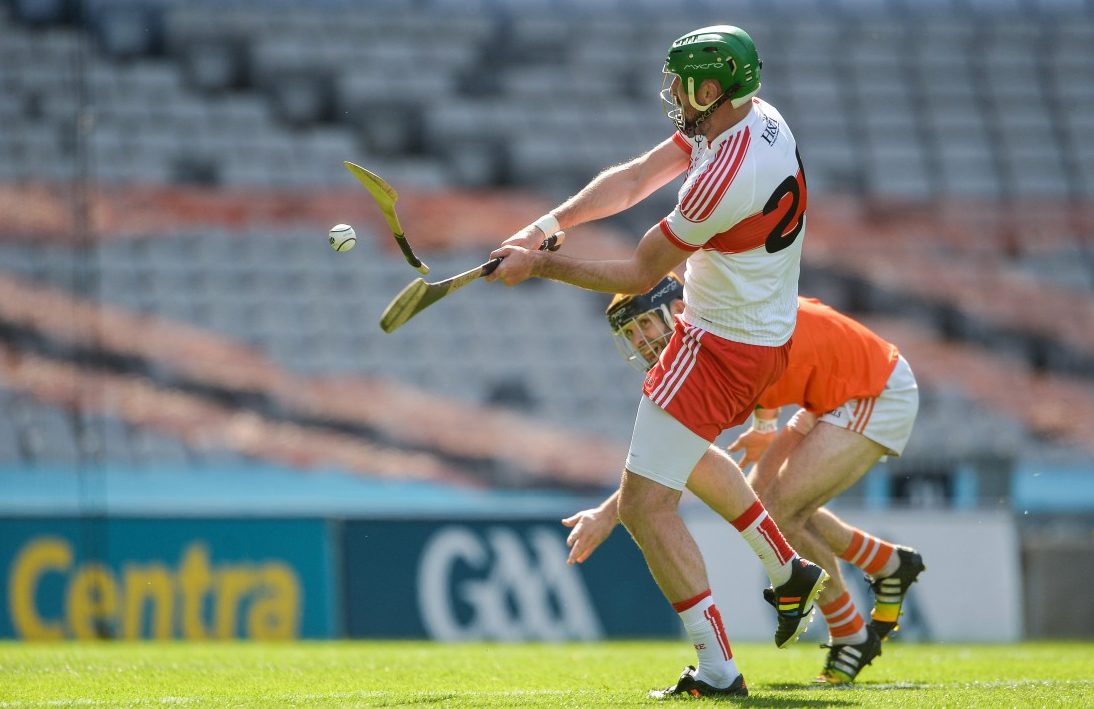 SIR Elton John gave a recent interview to GQ magazine in which he discussed his life from humble beginnings in Pinner, to pop superstardom and hanging out with presidents. In the interview he was asked if he had ever tried social media. He responded by saying, “Oh, my word. Thank God I don’t run my Twitter account. My career would have been over years ago.”

I, on the other hand, do run my own Twitter account, and two weeks ago, during the opening round of the hurling league, I was following the Armagh vs Donegal game when a notification popped up on my screen: “Ard Mhacha: 0-4 (4) Dun na n Gall: 0-1 (1) Ruairi Convery free.” I had to do a double take. Sorry, what? Ruairi Convery, the Derry hurler?! Surely this was a typo as there was no way that Convery had taken off the bainisteoir bib and come on to the field to hit a free?

I had heard rumours that at the start of the year that Convery, who for many years had no love for Armagh hurling, was now lining out for my native county. The same Convery who in an Irish News interview last year spoke about, “the great potential in the county.” I didn’t quite believe it at first but the match-day tweet brought home the reality.

Only in the GAA, could a man who played for Derry for a decade and a half, who lives in Dublin, who coaches the Trinity hurling team, and whose only connection to Armagh is through his recent nuptials and a membership registration with Whitecross, at 36 years of age line out for a team he was brought in to coach. Practically, how does it work at training? Does he set up a drill, do half the drill and then move on to set up the next drill? It is beyond parody. The issue I have is not about Ruairi as a person, but the fact that his position on the team, which he probably looked at the year before and thought, “I can do better than this bunch,” is pushing out one of the younger generation of Armagh hurlers who is sitting on the bench, all in the aid of what appears to be a vanity project.

But don’t take my word for it; Convery himself bemoaned the GAA transfer system and how it is being manipulated in lower tier hurling. In July 2015, in this very paper, he was quoted as saying:

“I don’t see the benefit in putting all this time, effort and money into development squads and developing hurling in the so-called ‘weaker counties’, when once it comes to senior level, if a man isn’t making his own county team, he can pledge allegiance to another county team. Is this really promoting hurling? Is this success?”

You tell me, Ruairi. You honestly could not make this stuff up! At least with Trinity College Dublin they have the good sense to keep him on the side-line.

Having seen the tweet from Armagh GAA, I proceeded to type the following reply: “The fact that this man: who retired from Derry GAA a number of years ago, has absolutely no affiliation with Armagh GAA & lives in Dublin is lining out for the County is an absolute disgrace! Shameful! What message does this send out? Management should be ashamed of themselves.”

The only thing I regret about this tweet was the unnecessary use of a colon.

Later that night, after posting the tweet, current members of the panel – as well as true hurling men within Armagh – messaged me to express their solidarity. In each message, the same point resonated: what message is having a retired Derry hurler playing for Armagh sending out to young Armagh hurlers who want to pull on the county jersey?

Dean Gaffney, my own club-mate, was told before the Donegal game not to take frees, that Convery was on them for the year. Dean is the future of the Armagh team, one of five brothers who have worn the county colours with great distinction. My old Armagh manager, Mattie Lennon, used to remind me that the County team has to be the flagship for the game; last week, it was flying at half-mast.

Armagh management, far from being ashamed of themselves, went on the offensive on Sunday night by taking the extraordinary and completely unnecessary step (without consulting with the team captain or any of the players) of cutting ties with this publication, which has for years championed the plight of hurling in Ulster and Armagh.

I don’t agree with this knee-jerk reaction, and to be honest it doesn’t surprise me that it came from a management team led by Padraig O’Connor.

During my time as a player I have been annoyed by some of O’Connor’s actions, which I felt weren’t for the good of Armagh hurling.

That is why, when I was asked at the start of the season to come out of retirement and join up with the team, I politely declined, stating, “With all good conscience, I could never play for Armagh under the current management.”

In terms of the Middletown players who did decide to return this year, I am sure they have their own reasons for doing so but given the personal breach of trust, it was not something I could agree to.

In the second round of the National Hurling League, the Armagh team, without Convery in the starting line-up or on the side-line, put on an exhibition of hurling, crushing Monaghan in the process, and I hope they continue this good form in the season ahead.

Sir Elton John may not have trusted himself on social media but on this occasion, I think my tweet shone a light on the practice of transfers in lower-tier hurling, and that far from promoting the game, it is doing serious harm to the long-term development of hurling in lower-tier counties. The GAA should forget about sin bins, and steps should be taken to urgently address the situation.

As for Armagh hurling management, they should lead by example and come out and apologise for this ill-advised dalliance in to the transfer system, and go back to promoting the game within the County by giving the young players a chance. Unfortunately, though, I won’t be holding my breath on this one, because it remains the case that, as Elton John famously sang back in 1976, sorry seems to be the hardest word.