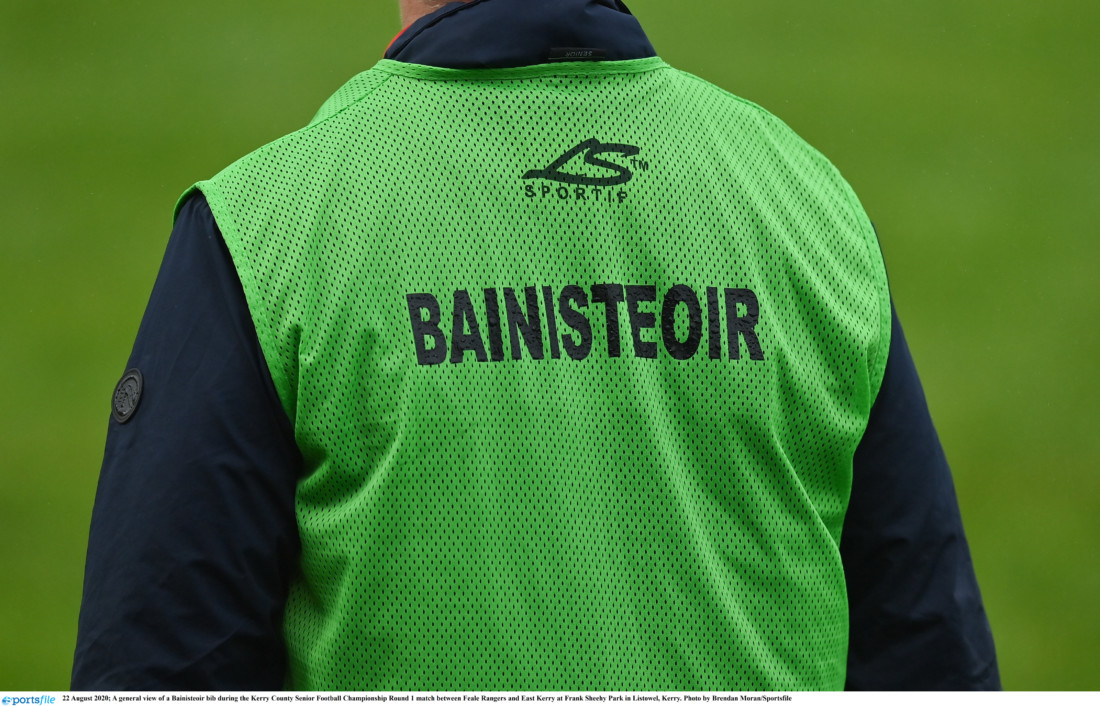 22 August 2020; A general view of a Bainisteoir bib during the Kerry County Senior Football Championship Round 1 match between Feale Rangers and East Kerry at Frank Sheehy Park in Listowel, Kerry. Photo by Brendan Moran/Sportsfile

THIS past month, during the annual managerial merry-go-round, I was reminded of the fictional cross examination of a 20-tonne elephant by a beanpole prosecutor in the famous 2012 Dan Piraro cartoon.

The prosecution lawyer is in the thrust of his cross examination as the 20-tonne elephant sits glumly in the witness box. The prosecutor poses the question to the huge elephant precariously positioned on a small chair in the dock: “If you were in the middle of the room the whole time, why can we not find a single witness to corroborate your testimony?”

The elephant sits there looking slightly worse for wear as the fictional Judge looks on in dismay.

As I followed the news breaking around a number of high profile GAA inter-county appointments, I read the press releases intently seeking clarification on the level of remuneration such high profile GAA managers would command in this most competitive of ‘vocations’. The only mention of consideration came from the GAA platform Joe.ie who had a picture of a well-known GAA manager accompanied by the caption, “for the love of the game.”

Within the various press releases and GAA column inches that have been printed over the last few weeks, the 20-tonne elephant remains in the room. However, no one seems to see the large mammal, certainly no one who would be willing to give evidence under oath to corroborate its existence. The elephant does not just locate itself within inter-county committee rooms, it is also very much present in GAA clubhouses up and down the country.

Now you will all tell me that it is a vocation and your own club manager doesn’t take a penny. He or she is a dye in the wool GAA person and wouldn’t dream of taking anything from the club. We all know, however, that this is more divorced from reality than a QAnon’s conspiracy theory.

I myself have no issue with managers and coaches getting paid for their time and expertise but is it not about time we brought this brown envelope brigade out into the open so they can simply own up to what is already public knowledge? Future inter-county appointment press releases should read as follows:

“We are delighted to appoint Mr X to the position of manager of the County Y football/hurling team for the 2021 season. We have agreed a payment package of £50,000 a year plus expenses and Mr X will be employed on a consultancy basis under a consultancy agreement for an initial 12-month period with the option for another 12 months extension by written agreement between the parties.”

Counties and clubs would simply be owning up and becoming more accountable to those that pay the gate receipts or put sponsorship money in to the club or county coffers. If I was a county sponsor I would certainly want to know how much the senior team manager is being paid a year; that way you can hold him or her to account in a more transparent manner. You could even ask the question, am I getting value for money here?

This ongoing cottage industry and brown envelopes under the table, the wink and a nod being all the same to a blind man, might have been okay 30 years ago but with county managers commanding upwards of £80,000 per year, this circus has to end.

Back in 2012 John O’Mahoney, former Leitrim, Galway and Mayo manager and then Fine Gael TD, said that: “The motivation of nearly all managers is the desire to win and be successful – not to make money. Why not legitimise payments to managers and bring transparency to it?”

I would agree with these sentiments but eight years on no official steps have been taken to even recognise the elephant in the room, never mind try and deal with the issue. Unbelievably the issue of employment law and employee rights has been brought up as a reason not to legitimise payments currently being made to managers. This is a fallacy that can be easily debunked on the basis that putting in place a consultancy arrangement would address the issue.

Andy Kettle a former Dublin County Board chairman said that “I wouldn’t be in favour of it [paying managers] because of a fear of it eroding the voluntary ethos of the Association.” For a county who have a club sponsored by the controversial Global technology firm Huawei and where almost each member of the county team has access to a sponsored car, this is a statement that takes some digesting.

Padraic Duffy in his 2018 Annual Report stated that “The GAA cannot continue to turn a blind eye to the culture of illegal payments to team mangers at club and county level.” Two years on the issue is becoming more prevalent and nothing is being done about it.

Some of the positives to come out of the pandemic-disrupted 2020 season is that the GAA has had to become more agile and innovative in terms of how it does business in order to remain viable.

In 2021 it is hoped that this new found sense of dynamism will continue and the GAA will finally remove the blind fold and recognise the 20-tonne elephant in the room before it is too late and the GAA itself, just like the elephant in the Dan Piraro’s cartoon, also has to take its seat in the dock.