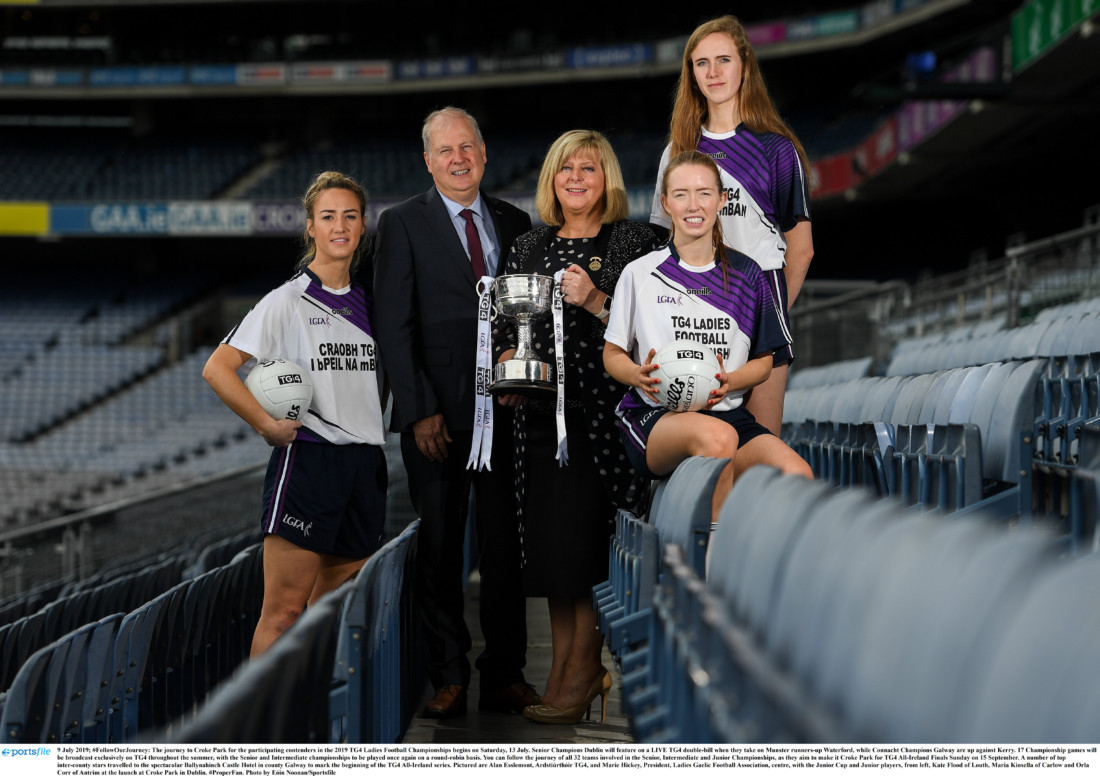 9 July 2019; #FollowOurJourney: The journey to Croke Park for the participating contenders in the 2019 TG4 Ladies Football Championships begins on Saturday, 13 July. Senior Champions Dublin will feature on a LIVE TG4 double-bill when they take on Munster runners-up Waterford, while Connacht Champions Galway are up against Kerry. 17 Championship games will be broadcast exclusively on TG4 throughout the summer, with the Senior and Intermediate championships to be played once again on a round-robin basis. You can follow the journey of all 32 teams involved in the Senior, Intermediate and Junior Championships, as they aim to make it Croke Park for TG4 All-Ireland Finals Sunday on 15 September. A number of top inter-county stars travelled to the spectacular Ballynahinch Castle Hotel in county Galway to mark the beginning of the TG4 All-Ireland series. Pictured are Alan Esslemont, Ardstiúrthóir TG4, and Marie Hickey, President, Ladies Gaelic Football Association, centre, with the Junior Cup and Junior players, from left, Kate Flood of Louth, Maria Kinsella of Carlow and Orla Corr of Antrim at the launch at Croke Park in Dublin. #ProperFan. Photo by Eóin Noonan/Sportsfile

“When you’re a star they let you do it. You can do anything”

This was a quote from the then soon-to-be President of the United States Donald J Trump as he laughed and joked back in 2005 about sexually assaulting woman.

The infamous Access Hollywood tape came out in the run up to the 2016 election. Watching the breaking news live at the time I thought Trump’s hopes of winning the White House that November were shot.

Accusations and litigation regarding his behaviour towards women had circled the then Republican candidate for months leading up election night but I felt the lewd comments captured on a ‘hot mic’ would be the final straw.

The Teflon Don however, inextricably still managed to win the election. America reaffirmed the fact that how the “Leader of the Free World’ treats women is not a subject that in any way turns the needle in the mind of the electorate.

In fact, within many key swing states in 2016, women inexplicably came out in greater numbers to vote for Trump than his Democratic rival Hillary Clinton. So much for breaking glass ceilings.

In Ireland we continue to cast a despairing eye across the water, especially this week when now President Trump, a man with 26 sexual assault cases currently pending against him, looks to be on his way to a second term.

In the #MeToo era and following the death of the legendary Supreme Court Judge, Ruth Beta Ginsburg, who famously quoted, “Women belong in all places where decisions are being made. It shouldn’t be that women are the exception.”

Glass ceilings continue to be broken in most western democracies and there are opportunities abound for women in the workplace and in positions of leadership.

The continuing call for equality in most democratic and right-minded places in the world continues to be embraced.

So as we cast aspersions about how stupid the Americans are for voting in their millions for a habitual liar who paid $130,000 to a porn-star ahead the 2016 election, it might also be a good time to look closer to home about how we, and how our sporting organisations in Ireland treat women.

We should also look at the level of respect that is afforded to those players who sacrifice some much in their lives to play our ancient games.

The recent “Levelling the Field” report which looked into the demands placed on female intercounty footballers and camogie players, revealed an appalling disparity between the financial strains experienced by male and female players of both codes.

In a world where the likes of Aidan O’Shea and TJ Reid are driving to training in their sponsored cars, 93% of female players receive no travel expenses at all! Even inter-county hurlers in Ulster get something!

Even those that are asked to take part in marketing and commercial activities, which involves a cost to them personally in terms of travel, time etc., receive no compensation.

This in a world where a sports agent, writing in the Irish Independent estimated that 2010 Footballer of the Year Bernard Brogan could command a salary of €100,000 through sponsorship alone! Eoin Conroy of Titan Marketing, commented about Brogan, “He’s very well-known nationwide, not just in GAA circles, he’s highly articulate and very presentable and he’s got a strong social media presence.”

He did, however, leave out the most important attribute that our Bernard possess when it comes to marketability in GAA circles, he is of course male.

In response to the report Maria Kinsella, Chairwoman of the Woman’s Gaelic Players Association (“WPGA”) will seek an increase in funding from government, noting that at present the WGPA get less than a quarter of the funding received by their male counterparts.

The latest available figures from 2019 put the disparity at over €2.3 million. The WGPA will also seek an introduction of an expense system, a step which in my opinion is long overdue, with the average round trip for female players attending training sessions being reported at 80km, three times a week. The figures by the end of a season are frightening, and all for the love of the jersey.

One solution suggested is a closer alignment with the GPA, the intention being that the GPA will assist in “strengthening the voice” of the WPGA by speaking as one.

Ahead of any such alignment, if I were Maria Kinsella, I’d also be asking the GPA to cut their executive team’s ‘fat cat’ salaries (which are regularly reported as being in excess of €100,000 per person) and put some of that omoney in to the new schemes – action not mindless talk is what is required for real change in the area.

I suspect Paul Flynn, the Chief Executive of the GPA, response to such a suggestion would be concise and would possible involve a number of expletives.

What was most concerning from the report was that 74 per cent of respondents stated that they were so tired from the mental stresses of their sport that they struggle with their work or studies.

Now you may say that woman’s Gaelic football and camogie doesn’t generate sufficient revenue to warrant expenses payment of medical bills being covered.

The famous former UFC fighter Rhonda Rousey made some, at the time, controversial comments on a similar point, stating that “‘I think how much you get paid should have something to do with how much money you bring in.”

She went on to say that, “I’m the highest paid fighter not because [UFC founders] Dana [White] and Lorenzo [Fertitta] want to do something nice for the ladies.”

The stark findings within the “Levelling the Field” report sets out in unambiguous terms that the level of equality and the level of respect afforded to female athletes within the GAA has been clearly absent to date.

Progressive steps within women’s sport and Gaelic football and camogie generally has already begun this year through the innovative “20×20 If She Can’t See it, She Can’t be It” campaign which seeks to create a cultural shift within how girls and women in sort are perceived and this has been a creative and welcome step forward.

However, unless systemic and radical steps are taken by the GAA, the Ladies Gaelic Football Association and the Camogie Association working in unison, things won’t change.

We can continue to cast a despairing eye across at Trump and American voters when it comes to their views on women, but perhaps it is also time that we as GAA members turned that critical eye closer to home and took steps to encourage and reward our female athletes who give so much of themselves in the advancement of club and county.

Perhaps in 2021 as a GAA organisation, we should seek to adopt the mantra of Making Equality Great Again. 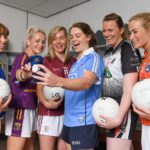 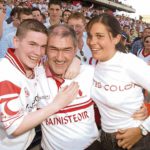 CAHAL CARVILL: A time for change