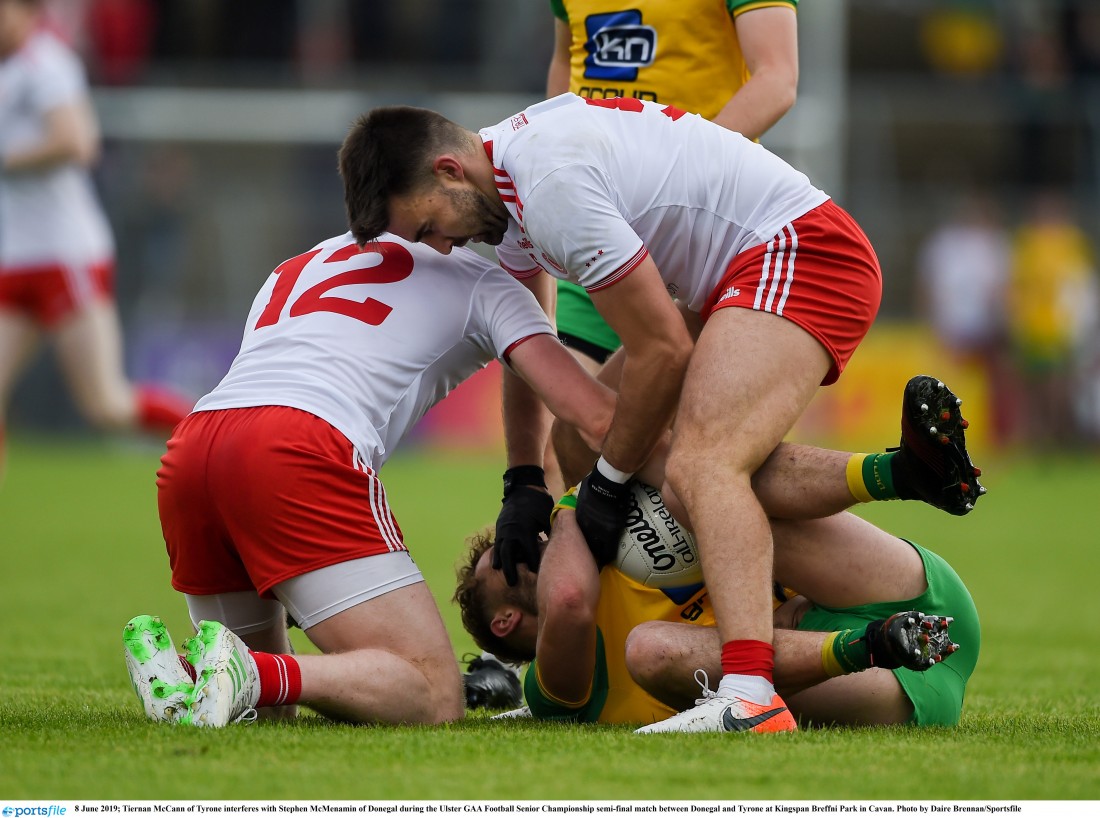 IN chapter eight of the Gospel of Saint John, Jesus, who had recently come down from Galilee, was presented with a scorned woman who was caught committing adultery. In Jewish law at the time, the woman was to be stoned to death and the Pharisees, in an attempt to trap Jesus, asked what was to befall the woman. Knowing he was being edged into the trap, Jesus deftly replied, “Let he who is without sin cast the first stone.”

Standing outside the Nisi Prius Courtroom in the High Court in Belfast this week, a barrister friend brought up the Tiernan McCann incident from the weekend, commenting that even the Lord Chief Justice himself couldn’t defend the lad.

Checking social media thereafter, sure enough the masses had exiled McCann; he had been lambasted by his own and shunned from humanity. The proclamation had been read and he had been hung, drawn and quartered by the Court of social media, with McCann sentenced to never set foot on another GAA field again. Based on what was being posted, the man was now a social pariah walking in our midst.

This week the GAA community certainly had the scent of blood in its nostrils and only the persecution and exiling of Tiernan McCann for the next millennium would quench the thirst for retribution and justice.

When it comes to McCann, it is true that even Darren Hughes’s dog can withstand a graze more robustly than Killyclogher’s answer to Danny Zuko, but the question remained with me during the week: who will stand up for the indefensible? Who will speak for Tyrone’s metaphorical John Coffey (like the drink but spelt different)? Who will save McCann from the GAA’s version of the green mile?

Given no one else has put their head above the parapet, I thought I might step into the breach and put my proverbial finger in the metaphorical damn.

Forgetting social media for a second, the actual real life charge lead against McCann by the GAA is categorised as a category three offence – behaviour that is considered dangerous to an opponent. The penalty applied is a one-match ban. However, in the Court of social media and GAA punditry, the charge against Tyrone’s number seven is much more serious; the charge levelled is unmanly behaviour.

Even on my best day at the bar I know there is no getting McCann off the GAA’s charge – I know a busted flush when I see one – but on the other charge there is significant precedent that I would wish to call upon by way of retort.

At this point, can I advise the reader to read on before running to the hay shed in hysterics to reach for the nearest pitchfork?

Yes, McCann was totally wrong in what he did, but for Karl Lacey to say after the game that McMenamin’s sight was gone for a short period is very questionable. Try as he might, McCann never actually got near the Donegal man’s eye.

The dark arts are a consistent presence in our games, and in this day and age, their frequency and increasingly twisted and incendiary nature is becoming a worry. That being said, throwing McCann on the GAA scrapheap because his actions were picked up in the RTE studio, turns attention away from the other off-the-ball stuff going on up and down the country.

Those who castigate McCann were mainly silent when it came to Armagh’s Mark Shields and his disturbing attempt at what can only be described as hooking Dara McVeety from behind. There is footage online of the incident from the drawn game in Clones and even so I don’t remember anyone calling for Shields’s head on a spike.

Back in 2003 when Philip Jordan went down like he had been picked off by an IDF missile while grazing Diarmuid Marsden, he was eulogised by Tyrone as his unmanly actions went a considerably way to winning Tyrone their first All-Ireland. God himself, Peter Canavan, came out this week and said, “It didn’t look good,” for McCann however he himself was a master of the dark arts, whether it came to buying the cheap free or constantly using his low trajectory to hoodwink officials.

Such dark arts are never brought before the CCCC but lauded and put up on a pedestal as gamesmanship and how you get that extra percentage to be successful. This begs the question if McCann’s actions had led in some way to Tyrone turning the tide and winning the game on Saturday, would he too be lauded and held up as someone who does whatever it takes to succeed?

Look at Dublin in the All-Ireland final two years ago against Mayo – once Dean Rock scored the decisive free at the end, David Clarke’s next kick-out was met with the whole Dublin front-line starting a riot with their Mayo counterparts, slowing the game down and ensuring no Mayo player was left standing in order to catch the ball.

Not a minute earlier, Lee Keegan, the powerhouse half-back for Mayo who went on to win an All Star that year, took his tracker pack out of his jersey and threw it at the placed ball as Rock went to strike the decisive free. If Keegan’s aim had been better, who knows, Mayo people might have erected a life size statue of the player outside of Castlebar. All is fair in love and war, isn’t that how the saying goes?

I have no doubt that those reading this will have heard or indeed uttered the words in clubhouses up and down the country, “He may be a scumbag, but he’s our scumbag.”

Shithousery, a bit of devilment, gamesmanship, getting an edge, whatever you want to call it or however you what to categorise it to make yourself sleep better at night, the win-at-all-cost mentality of today’s games is a hot bed for such antics and can bring out the worst in decent people. What I can’t abide however is the faux outrage from many quarters of the GAA fraternity about the actions of McCann, when on the other hand those who berate McCann will cheer to the rafters if a dive results in the game winning point or if verbal abuse or harassment results in an opposing player getting sent off.

The question of sportsmanship or what it is to be sporting goes out the window when such antics benefit your own. What McCann did was completely wrong, no doubt about it, but turning him into the pantomime villain, coupled with the hypocrisy of the online abuse, is as bad as the act itself.

He without sin and all that eh?…