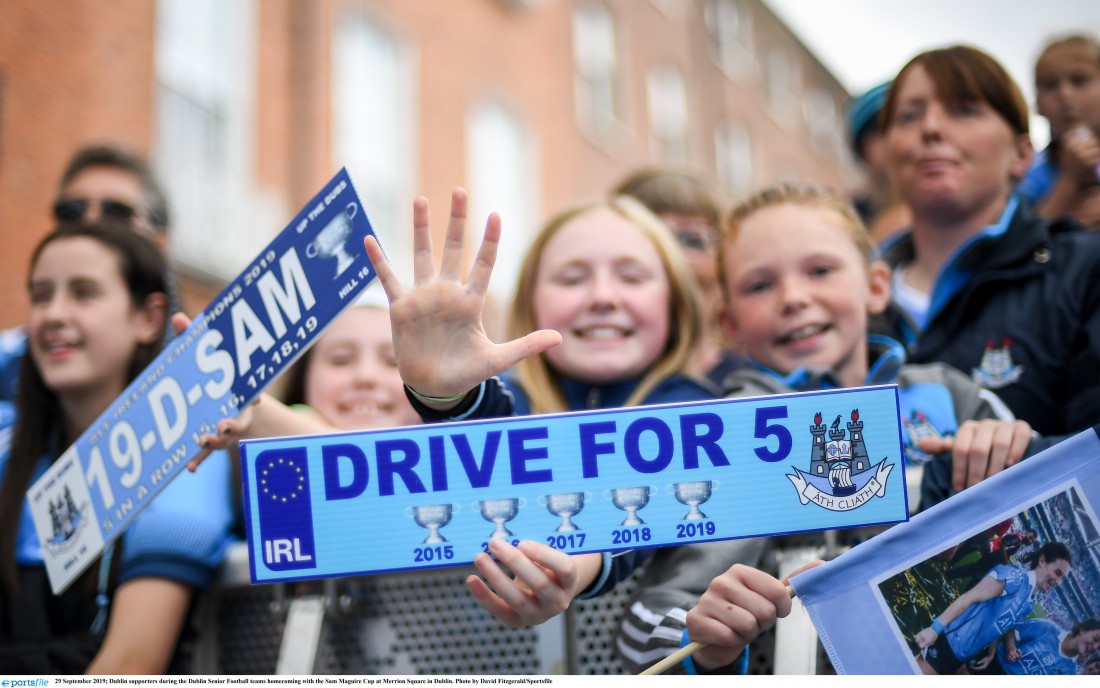 AND Moses said unto the people “Prepare for tomorrow and abstain from sexual relations.” And on the next morning, the third morning, Moses led the people out to meet with God, and they stood at the foot of the mountain and trembled as they waited.

And God gave unto Moses, when he had made an end of communing with him upon mount Sinai, the two tablets of the testimony, tablets of stone, written with the finger of God.” Moses. circa 1300 BC

If the first Hickey prophecy made Dublin’s opponents tremble, the second one may cause them to abstain from sexual relations. What’s the point in procreation if the Dubs are going to win anyway?

David, who won three All-Irelands with Dublin, has a habit of saying ‘old boy’ and ‘righty ho’ and ‘old fellow’ in a wonderfully aristocratic fashion, in the manner of Rob Reiner’s character in ‘Wolf of Wall Street.’

I presented him with a lifetime achievement award a few years ago for his services to organ donation and transplant, and during our conversation on stage I asked him what it was like to be the first pin-up boy of Gaelic football. He said “No one told me that at the time. I only found out when I was 50 and it was too late to take advantage.”

Dublin start with Westmeath in Leinster and when you look through the fixtures across the country, it is hard to see who will beat them, with only Kerry – if Clifford goes to individual heights that the game has never before witnessed – looking an outside bet.

The Dubs are still a young team, are constantly being replenished and have a system and culture of excellence that ensures they are the most cold-blooded finishers the game has ever seen. Nerves are not part of their make-up.

In the superb documentary ‘Best of Enemies’, a thrilling memorial of the Boston v Lakers rivalry that did for the NBA what Kerry and the Dubs did for Gaelic football in the 70s, there is a lot of fascinating stuff about Larry Bird, the Celtics unconventional leader.

In game four of the 1987 finals against the Lakers, with twp seconds on the clock and the Lakers two up, Boston have the put in and the Lakers know it will be thrown to Bird to take the final shot. As they scramble to block him, he launches one from the corner. Reminiscing on this, the Lakers’ AC Green says “As the ball was in the air, my heart stopped. I said to myself ‘Here comes death.’”

Like Bird, the Dubs are purveyors of death. To Kerry. To Mayo. To whomever. I have reflected on many occasions that they play as though they are the only team on the field. The opposition seems almost irrelevant.

I think of Dean Rock nailing the winner or a rookie Brian Howard, as relaxed as a Roman Emperor, emerging from a crowded square with a miraculous high catch to close out an All-Ireland final. Colm Cooper made the point to me once that the most unsettling thing about playing them is the way they ignore you, the sense that whatever you do it will not deter them from inflicting death.

The precision of their play reflects this. Hickey said to me this week,

“I played senior football for Dublin for 14 seasons and I never got a pass. The most I could expect old boy was a 50-50 ball. With the current Dublin team, Cluxton kicks the ball out and it is either a score or a wide. The other team are not involved.”

Hickey’s remark reminds me a great story my old team mate Enda Gormley tells about the 1987 Derry team he played on.

They had won Ulster and were facing Meath in the All-Ireland semi-final. Paul John McCormack of Swatragh, a medical doctor and a big powerful man, was the left half-back on the team, in front of Gormley at left corner-forward.

Paul John wasn’t fast, so he was nicknamed ‘The Flying Doctor’, as he is affectionately known to this day. As was the prevailing fashion, he would take possession in those huge hands and drive the ball 50 yards downfield through the air.

Before the semi-final one night at training, Enda pulled him aside and said “Paul John, I like to shimmy left to shake off my man, then run to the right, so if you could drop the ball in that space in front of me, it will give me the advantage.” The doctor wasn’t happy. He shook his head and said “Enda, I’ll leave her into the general area and you can fight for her like everybody else.” (In rural Derry, all inanimate objects are female.)

The new manager is the imponderable. He will be light touch. The “I am going to shake things up around here and stamp my authority on this team” approach would be too ridiculous for words. But still, it is like a new step dad being brought in as head of the family.

The chemistry of winners is a powerful but fragile thing and it remains to be seen if Gavin can be seamlessly replaced. We will know soon enough, as this old style knock out championship revitalizes the game and gallops to its wonderful Christmas finale.

The team is young, with several players who have never lost a championship match, including Howard, O’Callaghan, Fenton, Murchan, Byrne and Scully, and a group of young players currently being moulded for the next level.

Cluxton is in superb condition and a true disciple of pilates, yoga and core work.

One imagines him like Batman, hanging upside down by his feet from a metal bar wedged between the door-frame of his living room, eyes closed, in perfect silence for hours on end. When he eventually stops, his clone will be ready. How could young Comerford have had a better education?

True, Jack McCaffrey has left the panel, but Jack is different. I believe he is bored and feels unchallenged now. After all, he has five All-Ireland medals and for a young man of high intellect with electricity coursing through his hyperactive mind and body, and a huge amount to give, there is a big world out there to explore and to make better.