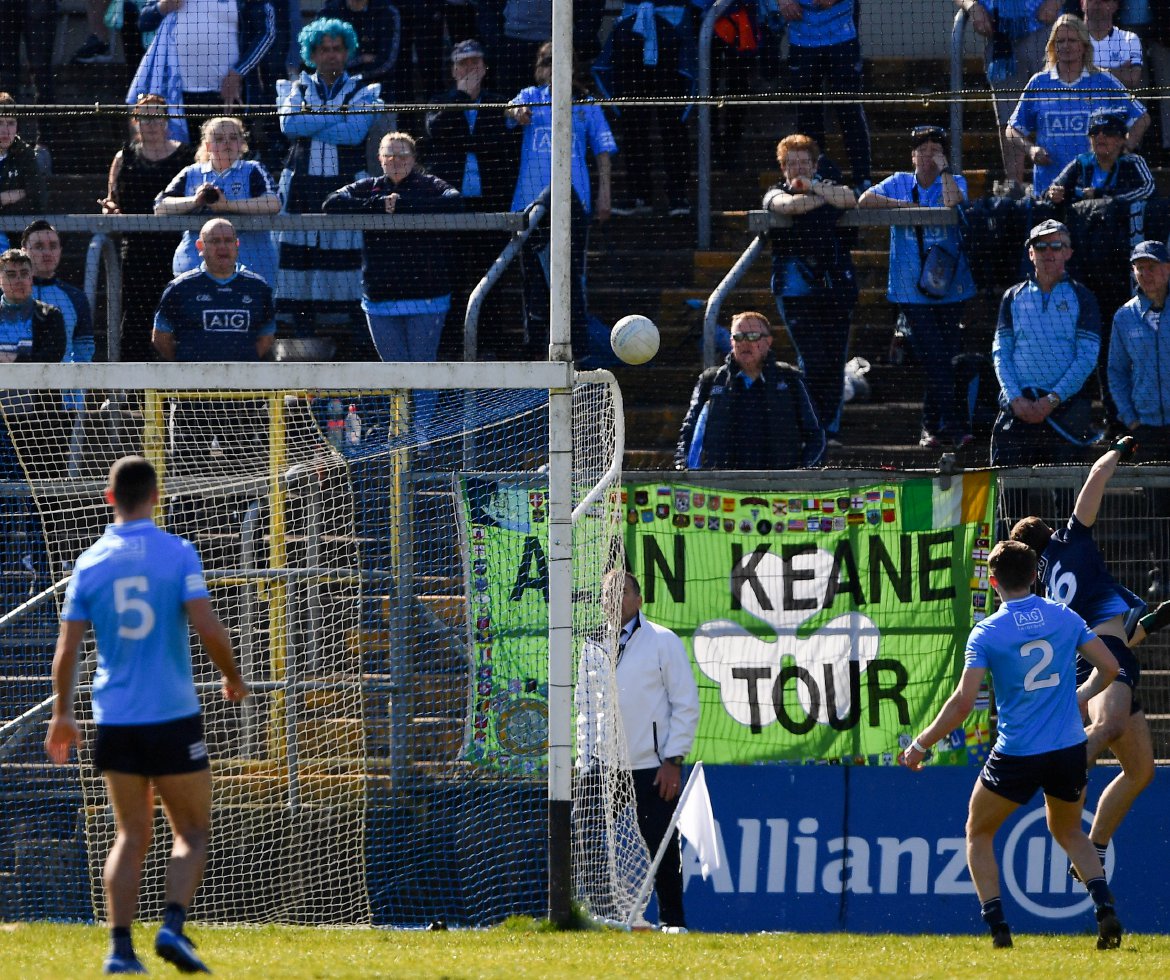 MOMENT IN HISTORY....Dublin goalkeeper Michael Shiel is beaten by what will become known as ‘the lob’ in Monaghan

MONAGHAN’S performance at the weekend was great fun, capped by a hilarious lob from Jack McCarron. There is nothing so uniquely enjoyable as a good lob. I lobbed John Finucane once (the Lord Mayor of Belfast and now MP for North Belfast) and to this day, the Lamh Dhearg boys rib him about it.

Whatever else happens in Jack’s career, this moment will be immortalised. The excitement of that game, against a Dublin team that no longer resembles a team at all, cannot hide the fact that as a spectacle, the game is in serious trouble.

At the White House on St Patrick’s Day, the Irish dancing sensation Cairde were going through their thunderous routine, when two of the dancers nearly leapt into the front row. Poor Nancy Pelosi almost swallowed her false teeth.

They danced for seven minutes and as they finished, the audience stood and gave them a prolonged ovation, before President Biden and the first lady went on stage and shook hands with them. Then, they spotted me and came bounding over like excited puppies, all talking together. “Joe, the football has gone awful bad. You couldn’t watch it.”

A few photographs were taken, the boys got a round of drink and they began. “We went to the Galway Clare match at the weekend and left with 20 minutes to go. Woeful shite.” “I refuse to go to the games anymore” said one of them. “What’s the problem?” one of them asked me. “The problem,” I said, “is that the game is no longer a spectacle. Can you imagine if you boys danced the way modern Gaelic football is played? You wouldn’t be long losing your three million TikTok followers.” “You’re fecking dead right Joe.”

I made the point to them that the basic components of an event and an audience are that there is a spectacle to enjoy, and that the GAA seems to have overlooked this.

They laughed and bounced up and down and chattered away enthusiastically until their manager took them away for a photograph with the US Marines band. Chatting to those boys would make you sea sick.

At the moment, spectators go to the games because we feel a strong loyalty to our lads and the older ones among us remember the game when it was exciting. It is a triumph of hope and loyalty over reality. But what of the younger generation? Will they keep coming?

I have posted a series of games from the noughties on my Twitter over the last few months and the reaction was incredible. Tyrone v Meath 2007. Derry v Dublin 2007 and so on. Watching them again myself I could scarcely believe it was the same sport.

The man-to-man contests. The skills. The long, accurate kicking. The ebb and flow of the game as teams attacked from end to end. The superb man-to-man defending. The thrill of the crowd. The noise from start to finish. Now, the games sound like a cricket match.

I have been to see England play cricket with Drumragh GAC’s Dessie Fahy, the only cricket fan in county Tyrone (interestingly, the late, great Martin McGuinness was a student of cricket). The crowd chat among themselves as the match unfolds. They drink pints from plastic glasses. Every now and again (more again than now to be fair) there is a bit of a cheer when something happens. But mostly everyone is just having a pleasant time in the sunshine getting gently anaesthetised on pints of Bitter.

In our games now, the ball is thrown up, there is a bit of a cheer, one team wins the ball, the defending team’s sweeper drops in front of the full-forward, and the sideways and backwards, the endless soloing and hand-passing commences. At this point, we settle into a chat in the stands, waiting for something to happen.

The Derry matches, like everyone else’s, are carbon copies of one another. The aim is to play like Kilcoo, extremely efficient but boring, with repetitive play and long periods of not much happening.

The Derry Roscommon game a few weeks ago was the usual thing. Some 4,000 Roscommon supporters chatting among themselves, then a burst of excitement in the last five minutes. Afterwards, the talk was “why do we bother?” and “why will nobody kick the ball anymore?” but you know this already.

Oliver Callan said in his radio program this week that X was “duller than a Donegal County final” but he could have been referring to football everywhere. As the game has become a niche thing for coaches and anoraks, the players labour through it like a man making love to a woman he no longer likes.

The problem is that unlike other sports, our rule makers have until now dealt with the symptoms not the illness. The core problem is the sweeper in front of the full-forward line, which automatically kills the flow of the game. This is easy to spot.

Instead of having two highly trained intercounty referees deciding whether a ball has gone over the sideline, we should position one in each half. Their main role would be to ensure there is no zonal marking. For five years, I have been advocating an exclusion zone 30 metres out from the goals in a semi-circle, ending 10 metres from the sidelines, inside which only man-marking is allowed.

A defender can only go inside it if the forward does. If a player in the defending team goes in there alone it is a 21-yard free in for the attacking team. If any of the three officials adjudge there is zonal marking, then it will be a free in from the 21-yard line. That will solve the core problem and return us to what survived for over a hundred years until Jimmy McGuinness came along and ruined it.

Some other simple rule changes: The ’keeper may not take a pass from an outfield player. This would stop the keep ball that discourages teams from pushing up, incentivise the full court press and encourage the defending team to kick long. As it is, the pressing team can do nothing when the ball goes back to the ’keeper.

Another simple rule: The ball may not be passed backwards over the halfway line. Again, this will stop keep ball aka game managementrunning down the clock. This way, the Dubs couldn’t do what they did in the last few minutes against Mayo of the 2017 final, running the ball from corner-forward the whole way back to Cluxton, then playing keep ball.

The kick-out beyond the 45 should also be compulsory at senior level, simply to promote contests and increase risk.

Coaches hate it because instead of retaining 90 per cent of their own kick-outs, they would have to take a gamble.

Either that, or allow us to drink at matches.