Advertisement
HomeClub All Stars2021 Club Of The Year Award

Congratulations to the 2021 Club of the Year nominees.
Voting will close at 10am on Monday 21st February 2022.

The winner of this category will be announced at our Black Tie Gala Event on Friday 11th March 2022 at the Armagh City Hotel. 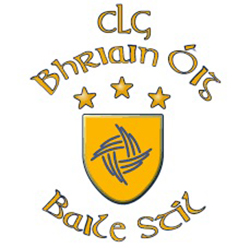 Create your own user feedback survey

The Letterkenny club will need a new trophy cabinet at O’Donnell Park after a dominant season on the domestic front with six adult championship titles.
Their senior footballers saw off Naomh Chonaill to get their hands on the Dr Maguire Cup again, with their hurlers upsetting the odds to win a first Senior Championship since 1972.
The footballers also won the Reserve Championship and the ladies were also champions. The club also won U-21 football and hurling honours, with Cormac Finn picking up five medals in a remarkable season.

It  has been a remarkable season for the Brian Ógs. They backed up a first ever Derry adult men’s title with a year to remember.
After a late surge to see off Greenlough and toss the monkey off their back, they raced through Ulster and ended up lifting the All-Ireland title in Croke Park.
Their senior ladies won another championship and lost to Kinawley by a point in the Ulster final.
Off the pitch, their newly opened strength and conditioning suite is in full swing.

Sleacht Néíll
The Derry kingpins have once again been at the forefront of Ulster honours.
Their hurlers would have looked on at what might have been when Harry Ruddle lashed in a last minute winner for Ballygunner to annex the All-Ireland hurling title.
After winning an eighth successive Derry title, they eased their way past Ulster rivals Dunloy and overcame Ballycran to conquer Ulster, before running Ballygunner close.
Their camogs, after winning the 2020 Derry and Ulster titles, were top of the tree again with another mammoth effort against Loughgiel. 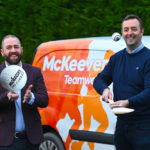 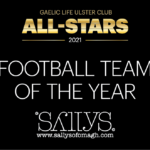 Football Team of the Year 2021 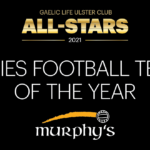 Ladies Football Team of the Year 2021