RECENTLY I had the pleasure of covering an Irish League match between my local team Newry City and Dergview.

It was the first soccer match I had provided pitch-side physio at since leaving Sunderland in 2005. All my experiences since then have been with Gaelic football and hurling teams so I enjoyed the opportunity for something different again.

Newry have had consecutive promotions to what is the second tier of soccer in the Irish League under the guidance of local manager Darren Mullan.

Thankfully before the game Darren had the foresight to remind me of the rules regarding physios coming onto the pitch in soccer matches.

“Don’t be running onto the field like a blue-arse fly,” he said. “The referee will ask the player if he wants you on and if so then he (the referee) will call for you.”

I appreciated the reminder from Darren thinking that in theory this all sounded well and good but, knowing mainly from my Gaelic experiences that I was still in for a busy night. How wrong I was!

In the whole 90 minutes (I was gathering my things up at 70 minutes to head home but I don’t think anyone noticed) on a very wet and windy night, in a tough, no-holes-barred Irish League battle between two competitive teams, not once did I have to enter the field to attend to a player.

There were several occasions when I thought I might be needed having watched players ship heavy tackles. The referee would make his way over to the player on the ground and simply ask him “do you need the physio on?” Had he said yes the referee would have waved me on.

However as soon as I enter the field, the player who requests my input must leave the field of play even if the intention is to play on. He must go to the sideline and wait for the referee’s signal to re-enter the field. Knowing this, every player who went down or had taken a knock informed the referee that they did not need physio, took a few seconds to recover then got on with the game.

Thanks to the rigid application of the rules, the players know and understand that they are playing a contact sport where they will pick up knocks, which as per this Irish League game, all subsided sufficiently within a few seconds to allow the player to continue in the game.

This ruling in soccer is a far cry from what goes on in the Gaelic field at present. Like many other rules within the GAA, the directives around when the physio can or cannot come onto the field seem to change year-on-year.

There is no consistency on whether the physio can enter the field when an injury happens or will the referee call you on? Will the game be stopped or will play continue? Referees seem to vary in their approach to this.

As a result, both managers and players vary in their understanding as to the role of the pitch-side physio. Our main job is to assess whether a player is able to play on or not. Apart from some minor running repairs such as taping a thumb/wrist or dressing wounds and dealing with blood, the focus of the physio is decision making – return to play or removal from play.

For most other injuries such as muscle strains, there is nothing the physio can do to enable the player to continue. The catastrophic long-term affects of numbing an area with freeze spray so as to play on are well known. 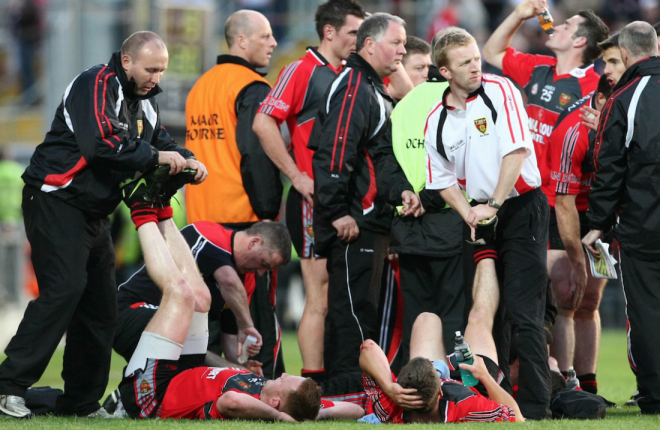 EXPERIENCE…Francis Quinn (white top) with the Down team

Over the years I’ve dealt with a wide range of scenarios on the Gaelic pitch as a physio. I recall once in a bruising encounter between Down and Armagh in a National League game in Crossmaglen when one Down player received a head injury.

While initially satisfied the player passed my basic Head Injury Assessment, I allowed him to play on but I continually monitored him. He strangely took up position out on the far wing away from the play and away from any Armagh player.

Concerned about this I quickly made my way around to the far side of the field where he was. ‘What are you doing out here?’ I shouted to him. Not taking his eye off the play he responded ‘I’m picking up this man here,’ he replied. ‘Where?’ I asked. Again not taking his eye off the play, he said ‘there,’ as he was pointing to the linesman! Myself and the linesman looked at each other, caught the referee’s attention to stop the game and removed the player from the game with obvious concussion.

Permission to enter the field for urgent incidences such as a concussion could easily be facilitated through the officials but the trivial things could be handled similarly to soccer. This would facilitate a change in the culture and psychology as to how injuries are dealt with during a game.

One team I was involved with had me hooked up through radio to one of the selectors on the sideline so as to feedback the decision on a player from my own pitch assessment. However every time I had reached a decision I realised the man I was to be communicating with had made his way onto the field as well and was standing beside me.

So I believe the GAA need to follow the lead of soccer on this one, make clear guidelines that officials, managers, players and physios are all aware of and then follow these guidelines consistently rather than change them every year.

This will help speed up the game by avoiding time wasting and encourage a greater mental toughness in players towards minor injuries and knocks without putting players who are seriously injured at any greater risk of further damage.

To finish, one of the most obscure incidents I was called onto the field for was by a player who was having a ‘wardrobe malfunction.’ In the middle of an important National League game he wanted to know if I had a safety pin for the front of his boxer shorts as a certain piece of his anatomy kept popping out for fresh air. I wish he hadn’t shown me what he meant!
comment@gaeliclife.com