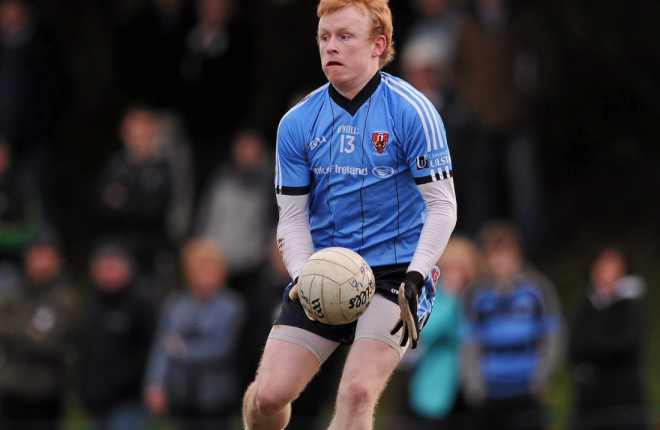 WHAT was the most shocking moment when chatting to former Tyrone u-21 player Diarmaid McNulty about his concussion hell?

Was it when his college housemates found him passed out with blood dripping from his ears and nose? Was it when he passed out unconscious having just driven from county training back to Gortin? How about when he regressed into an almost childlike state for a few weeks after one particularly bad knock?

Maybe, just maybe, the most unsettling aspect is not the details themselves, but the length of time it takes the player to summarise the eight times he was diagnosed.

Back in 2015, McNulty went from possible future Tyrone player to retired footballer. His battle had been lost and he hadn’t even a scar to show for it.

“Gaelic was my life. I never took a drop of alcohol and I never smoked,” he said.

“I’d have been dragging the young lads to the gym and different things like that because Gaelic was the be-all and end-all for me.

“It was a strange sensation when I did finally step aside. What was particularly strange was I don’t think people realised just how much football meant to me because they thought I probably could have played on if I had wanted to.

“The decision wasn’t about not playing football, it was deciding that there’s more to life. At some stage I had to make a decision about the longevity of my life.”

It may be over two years since McNulty, now a teacher in Dundee, stepped away from the game, but all the bad memories came flooding back when he sat down to watch Alan Shearer’s recent documentary investigating the link between heading footballs and dementia.

The player knew that he had his own harrowing story to tell and by finally doing so, he may just save someone else’s career.

“Why am I talking about it now? Some poor lad is going to be in the same situation as I was and maybe there could be that bit of extra care,” said McNulty.

“You played all your life and for it to be taken away by poor protocol or wee steps not being in place is very frustrating.

“It is my hope that more can be done, much more, and I just want to get the discussion going really.”

It takes the player over 10 minutes to give a brief synopsis of his eight concussions, which in itself is discomforting.

“My first diagnosed concussion was in 2010 whilst playing in the championship with the club (Gortin),” McNulty said.

“I got one about six weeks later, so obviously there wasn’t much of a gap between the first two.

“The third one happened during training but I never lost consciousness right then.

“Later, my mum found me on the sofa unconscious and the scary thing is that I drove home from training.

“I was on the bench. I was coming back from concussion and I assume that’s why Raymond Munroe didn’t start me because I was starting every other game.

“Munroe fired me on with 10 or 15 minutes to go when then game was in the melting pot and a boy just caught me on the temple area.

“I ended up taking a three-month break after that. It had to be done, it was more a personal decision than a medical one but I knew it had to be done.

“Then I was playing with Jordanstown and I got a wee bang, that was number five.

“Adrian McGuckin was over the team at the time and he said he didn’t want to see me for a couple of weeks.

“That was the first time I ever thought ‘Jeez, here’s a manager putting the player first’.

“I really appreciated it and looking back on it now, I appreciate it even more.

“I was flying for Jordanstown when I came back in January 2012, I was the top scorer in the McKenna Cup and things we were going well.

“We lost the Sigerson semi-final to DCU and then a week later with the club, we were doing a tackling drill. Whatever way one of the lads caught me, I was out cold.

“I wasn’t a well man so I came back down to training the following week and I told the club that I was going to have to take two or three months off here.

“Men were sort of looking you maybe thinking were you weak? That was very frustrating.”

Of all the concussions, perhaps it was the seventh that really shook McNulty to the core.

This wasn’t a hefty challenge in a match or a collision in a training drill; this was simple life.

“It was scary, it happened when I was sitting doing my finals in Jordanstown.

“I was taking a break from revising and I was on the top bunk.

“I literally jumped from the top bunk onto the ground and whatever way I jolted myself I knocked myself out.

“Nobody else was in the house because it was a school day for the rest of them. My sister found me 30 minutes later just lying out cold.”

The next concussion proved to be the final straw; McNulty’s playing career was forced to come to an end.

“I didn’t have another for three and a bit years,” he said.

“I had really been looking after myself and any wee bangs at all, I would give myself a wee break, but concussion eight was the end of it.

“I got it playing for Gortin against Urney in October 2015.

“It was like a double bang and the ambulance had to come. I was in Altnagelvin for the night under observation.

“I went and saw a couple of people afterwards and they gave me their opinion.

“I was weighing up the comeback. I was teaching in Scotland at the time and I was still thinking I could give it a go.

“At that stage it was clear there was a weakness though, I even bumped my head off a cabinet in school and had to take a few days off.

“I decided I couldn’t continue to put my body through it because simple things like memory and hand-eye co-ordination were suffering. Even exercise was hurting my head.

One of the toughest things for McNulty – and one that he knows that may stop others affected from making that ultimate hard call – is that without physical evidence, the severity of the issue may be questioned.

“If you don’t have a bandage or you can’t walk then people think there’s nothing wrong with you,” he said.

“My Da would always have said that he noticed a big personality change in me for weeks after.

“He said I would have regressed into almost like a primary school kid and me 21 at the time.

“I’d be sitting in the passenger seat and I’d just be fascinated by a car or a lorry or laughing at the silliest of things.

“My mum always would have loved me to put on the boots one more time, but she had seen the devastation it has had and knew I couldn’t go down that road again.

“I don’t think it’s really accepted just how bad it is for the players, as well as their families and partners. People don’t see behind closed doors.

“I owe a lot to a woman in Derry, Marie McElhinney.

“She’s a chiropractor but she’s also much more than that.

“I have been going to her since 2007 and the advice she has given me has been so invaluable, she’s so clued up.

“She was seeing me on a regular basis so she could see the changes in me over the years, she talked about the damage I was doing to my brain.

“I owe her so much, she gave me such good advice when I was considering my future.”

The issue of concussion is becoming more pertinent in the GAA but, for McNulty, there is a long road to walk yet.

It is his hope that the more the topic enters the public eye, the more likely the Association will take further steps to address the matter.

“We have to have more research conducted,” said McNulty, who investigated the issue in his college dissertation.

“If you then get any bang you do the test again. If you’re not hitting same scores as you were, you have to sit out for a while.

“All I want is a discussion and to get the ball rolling and to see what the GAA can do.

“I coach rugby here, every coach, player and parent goes by the ‘if in doubt, sit it out’ mantra.

“That maybe doesn’t exist in the GAA yet but it has to. We’re human beings at the end of the day and there’s life after football.

“We need protocol that is easy to understand and rolled out at all levels.

“We need to educate and train. We need people to realise that even if there’s no plaster there can still be something wrong.

“If you’re getting concussion your mind is bruised and it needs time to heal.

“The GAA has a bit of money about itself, they have to look at something more.

“They need to create some sort a dialogue, get medical professions in and start more research. It can be so important to the longevity of careers.”

McNulty unfortunately knows that through his own experiences, he hopes others can be saved.