A NEW Gaelic Games Board Game, Bainisteoir, has made waves in the toy market since being released last November.

Bainisteoir is the idea of James Fallon and Éanna Byrne, two primary school teachers who noticed an absence of sporting board games for students to play on rainy days at lunchtime.

On a cold night in March 2020, confused locals in the Angler’s Rest in Headford, County Galway, switched from Liverpool taking on Atletico Madrid in the Champions League, to the creators, testing the first prototype which consisted of handwritten sheets of paper scattered across a table.

Nearly two years and two lockdowns later, the first truckload of the game arrived just in time for the Christmas flurry. After the success of last year, Bainisteoir is back again for GAA enthusiasts and is certain to be a hit at home this Christmas!

Bainisteoir is a family-friendly board game where Bainisteoir’s move around the board winning and losing money, managing their finances to purchase players to improve their squad in the first Gaelic Games transfer market.

Players from the 32 counties, along with London and New York, are represented in the game. It is a 2 – 4 player board game suitable for families and children aged 7+.

The game was manufactured by Cartamundi in County Waterford, making it very much an Irish product.

It is also available in Smyths, Art n’ Hobby and Michael Murphy Sports along with over 90 stores around the island.

Sponsored content: Get ahead of the game with TNT performance range 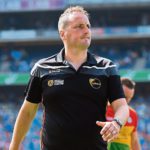